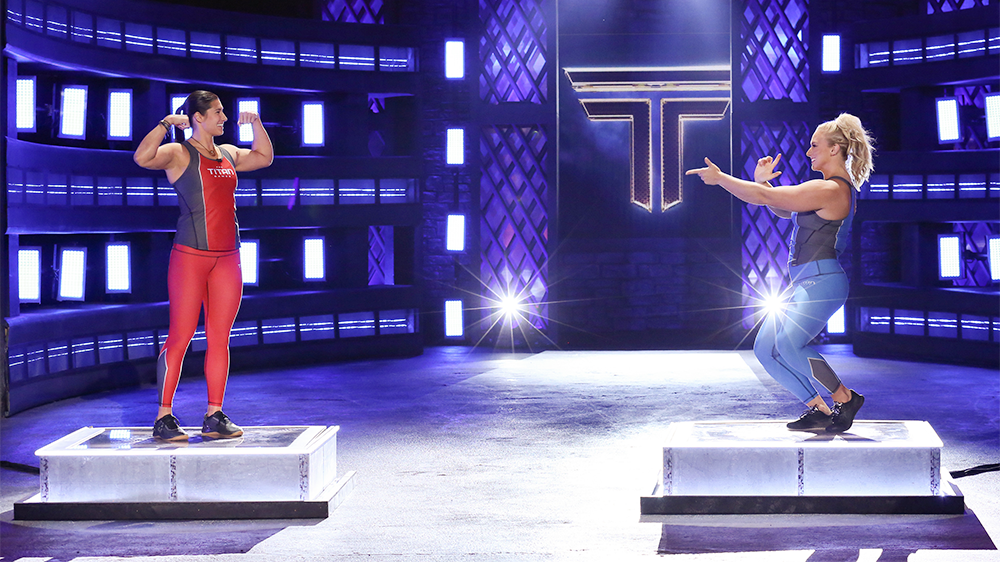 This week, in ‘The Titan Games’ season 2, we had a chain of the most challenging tasks. Titled ‘East Region 3: DJ’s Last Call’, episode 10 marks the entry of some of the strongest contestants — motivational speaker Courtney Roselle, firefighter Shantal Athill, bodybuilder Joshua Porter and Blake Broadhurst. Among the females, Courtney maintains the lead in both the challenges: ‘Nuts N Bolts’ and ‘Lunar Impact’.

Shantal tries her best to keep up with Courtney but the latter defeats Shantal with grace. Courtney even emerges as the winner after beating Haley at Mount Olympus. Haley had earlier won two rounds at Mount Olympus and loses to Courtney even though the race is a close one. Courtney reaches the ball and chain first and bags the win, after being only a few seconds ahead of Haley.

Joshua is pitted against Blake, wins the task, and then loses to Will Sutton at Mount Olympus. In around 35 seconds, Joshua pulls the stone to his side, much before Blake does, and easily becomes the Titan contender. However, in the battle for Mount Olympus, he is almost neck to neck with Will Sutton until they reach the cage crawl. Joshua suffers from an unexpected injury and because of the subsequent exhaustion, is unable to complete the task.

Next week, we will have the ‘Eastern Regional Finals’, which also serves as the pre-finale before the much-awaited ‘The Titan Games Finale’. And the 11th episode has been teasing some epic moments. If you want to know what the upcoming part has in store for fans, here’s our detailed preview!

The upcoming episode is called ‘Eastern Regional Finals’. Here, we will see the winners from episode 10, Courtney Roselle, and Will Sutton participating in a series of tough challenges to make it among the Titan finalists in the grand finale. Even Joshua will get a chance at redemption. The planned tasks will be similar to that of the previous ‘Regional Finals’. The contestants will need to battle it out in ‘Hammer Down’, ‘Resistance’, and then the ultimate race to Mount Olympus.

Where to Stream The Titan Games Season 2 Episode 11 Online?

‘The Titan Games’ season 2 is a Monday staple on NBC. If you are in the US, you can easily catch up on the latest episodes of the reality show by tuning into the channel on your tv screens each week at 8 pm ET. If you have a cable subscription for NBC, you can also catch the episodes online, following their tv premiere, on the show’s official website.

If you are a cord-cutter, you can resort to the multiple live TV streaming services, namely, Sling TV, YouTube TV, Fubo TV, and AT&T TV Now. Season 1 of ‘The Titan Games’ is also available on Hulu. Additionally, already released episodes can be rented or bought on Amazon Prime Video. All the episodes of the first season are currently streaming on Netflix.