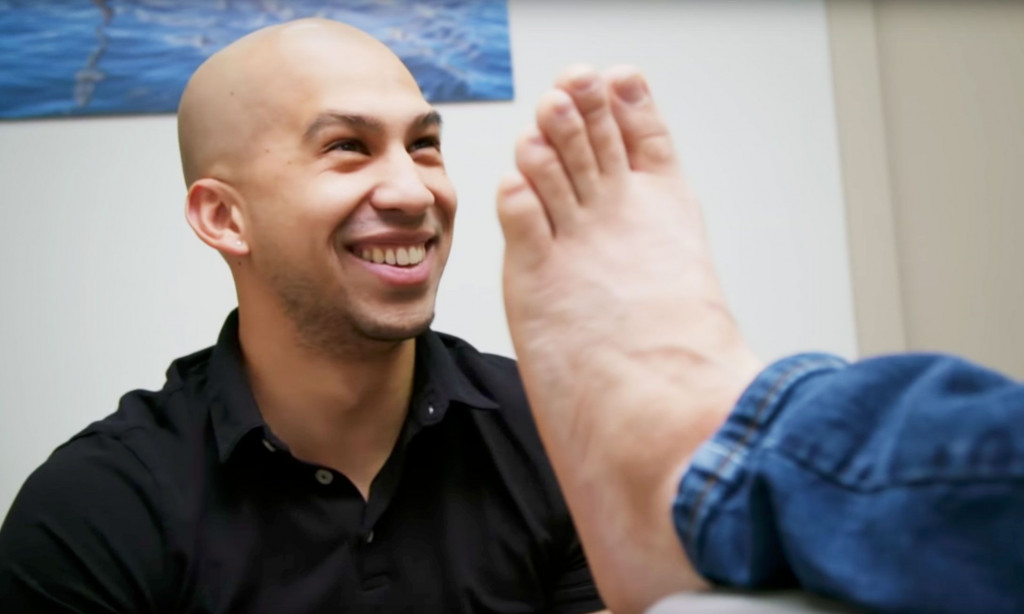 Chiropodist Jonathan Tomines, a popular YouTuber, has been disgusting and entertaining his viewers with equal measure for a while now. So much so, that he has been assigned his own television reality series by ‘A&E’, named ‘The Toe Bro‘. To call this show one of a kind would be an understatement, considering the fact that its prime focus seems to be on human toes. Yes, you read that correctly–on human toes! The show first premiered on March 5, 2019 on ‘A&E’. Surprising as it may be, Tomines now has hour-long television episodes, which follows him treating four different patients in what may well be the strangest hour on American national television.

The episodes of first season were named ‘Toezilla’, ‘The Nail Eating Toe’, ‘Mother of All Warts’, and ‘Zombie Nail’.  If these names are piquing your interest, well hey, you aren’t alone. You belong with the thousands of Tomines’ YouTube followers, and all of you need to seriously re-think life. Tomines says and I quote, “I was basically born for this”, and one couldn’t agree more. Here’s a man, who made a thriving career out of human toe nails; a fact which is genius at best, and sensational at worst. Jokes apart, Dr. Tomines has so far, helped over 5,000 foot patients, and A&E notes there is nothing “he won’t clip, slice, or scoop until suffering is a thing of the past.” The maverick says, “A lot of people might think my job’s disgusting, but I help people get back on their feet”— well his pun-game seems to be pretty on-point too.

The Toe Bro Cast: Who is in it?

Episode one, named ‘Toezilla’, marks a regular day in the office for Tomines aka the ‘toe bro’, as he examines a former ballet dancer suffering from a painful ingrown nail. Other patients featured in the series include a little girl fighting a stubborn wart, a Olympic swimmer with fungi infected toes, a pair of quirky brothers who need help with their ingrown toenails. A pretty regular crowd, isn’t it?

The Toe Bro Plot: What is it about?

Well, what do you think it’s about? Each episode takes the viewer on an hour-long journey of Dr. Jonathan Tomines in his ‘playful’ process of dealing with various toe related foot ailments. From ingrown fingernails, to stubborn warts, to toes bubbling due to runaway fungus—Tomines’ got a cure for them all. The consultation, treatment, and ultimate recovery, all three finds screen-time creating a wholesome hour of spaced out television. All these jokes, and cringe, shouldn’t take away from the importance of the profession and treatment. Only the ones actually facing foot ailments, can ascertain the real worth of Tomines , while the rest of us cringe, watching him scoop out  toe nails. Tomines’ friendly bed side manner adds assurance to the patients featured in the show, and creates a more confident atmosphere for him/her.

The season premiere named ‘Toezilla’ follows a former ballet dancer longing to rid herself of painful ingrown toenails in order to be able to dance again. Other cases in the first episode include a diabetic patient’s extreme pincer toenails and a huge infected toe that balloons from infection. Episode 2, of ‘The Toe Bro’ follows the eponymous chiropodist in his process to treat a patient’s fungi infected toes and a little girl’s stubborn wart. A pair of quirky brothers- one, a drummer, and the second, a BMX rider approach the miraculous Toe Bro, for his help regarding their ingrown toenails and calluses, in the third episode. The latest episode follows an Olympic swimmer with fungi infected toes, a young man who has toes growing right through his flesh, and a patient with a massive colony of 30-40 warts who receives a much-needed foot-lift.

The Toe Bro Season 2 Release Date: When will it premiere?

Season 1 of the show premiered on A&E on the March 5, 2019. The experimental nature of the series, clubbed with the fact that season 1 has just begun, makes it very difficult to predict the second season’s premiere. In fact, whether ‘A&E’ will renew production of ‘The Toe Bro’ for a second season is dependent on the success (or failure) of the first. If the show does get renewed, Season 2 can release sometime in March, 2020.

Here’s a sneak peek, to give you a better idea of what’s in store for you. It’s my duty to warn you that this clip is not for the faint-hearted. Therefore, the more squeamish of you lot, beware!