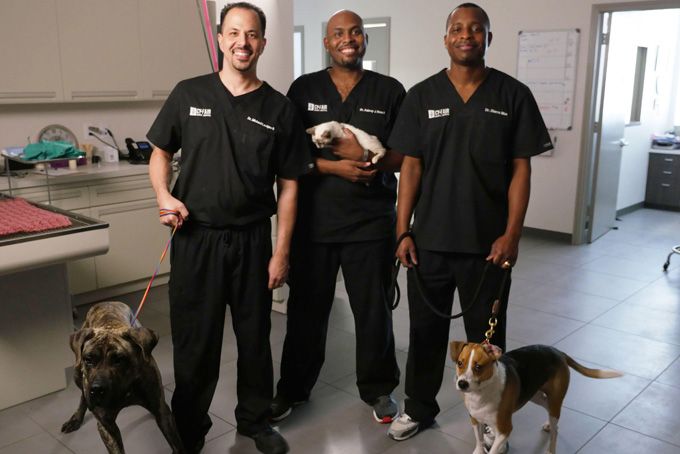 ‘The Vet Life’ is an American reality television series that airs on Animal Planet and follows three veterinarians in Houston, Texas, who work around the clock to save animals.

A pretty old show, Season 1 of ‘The Vet Life’, consisting of eight episodes, premiered on May 29, 2016. While it received enthusiastic responses from pet owners and animal lovers alike, the show also generated some controversy. Regardless, it was renewed for a second season, which made its way to viewers’ screens on April 16, 2017. Less than a year later, a third season followed, premiering on January 14, 2018. Subsequently, the show was renewed again and Season 4 premiered on April 6, 2019.

The Vet Life Cast: Who is in it?

The main cast of the series includes Dr. Aubrey Ross, Dr. Diarra Blue, and Dr. Michael Lavigne, who behave more like friends and less like colleagues.

Having attended Tuskegee University’s College of Veterinary Medicine, all three have a very strong bond that goes back years. Being in practice for many years, the trio long had plans of opening an animal hospital. Their dream came true in 2015 when they managed to open a hospital named Cy-Fair Animal Hospital in Houston, Texas.

“All three of us had a love for animals at a very young age. Dr Blue and Ross knew they wanted to become veterinarians at a young age. But, I didn’t think about pursuing it as a career until I was older. It wasn’t until I was dating my wife and she saw my passion for animals that I thought about it. She gave me the idea to go into veterinary medicine,” Dr. Lavigne had said, explaining the trio’s foray into veterinary medicine.

Apart from the three doctors, the show also features families who approach them, the doctors’ own families, and others.

The Vet Life Plot: What is it about?

As the name of the show suggests, ‘The Vet Life’ primarily documents the highs and lows in the lives of Dr. Aubrey Ross, Dr. Diarra Blue, and Dr. Michael Lavigne as they try to manage their careers and their family lives. On a daily basis, the trio have to deal with various medical emergencies and requirements, which range from knee surgeries of dogs to castrating 1,200-pound bulls. Contrary to belief, the show makes the life of a vet look full of surprises and challenges.

The Cy-Fair Animal Hospital was founded by the trio in 2015, and ‘The Vet Life’ gives viewers a glimpse into the lives of the three doctors a year into their new business venture. Of course, the going is hardly easy, as the three doctors not only have to manage the full-service hospital, but also the animal shelter that comes with it. However, while the trio have to struggle initially, the hospital is the manifestation of their dreams coming true, and all three put in as much effort as they can to provide animals with the best medical services.

Being a vet ain’t easy, and the show tries to give viewers a glimpse into the trials and tribulations of the profession. Throughout the show, we see the doctors trying to juggle their careers and their family lives, and this of course, is not a very easy task. The trio are also constantly meeting new pet owners, and have a large group of friends, and this variety ensures that the social interactions in the reality show don’t get monotonous. Occasionally, we also see the doctors clashing with each other in the workplace, and they also have to deal with other unexpected issues such as Dr. Ross getting involved in a major accident. Yet, through all these ups and downs, the doctors manage to come out with smiling faces and do their best to serve afflicted animals.

While ‘The Vet Life’ is a family-friendly show, it should be noted here that it got embroiled in some controversy when it first started out in 2016. On August 11, 2016, it was reported that the Cy-Fair Animal Hospital and the three reality star doctors had been sued by a couple after one of their puppies died at the hospital hours after being dropped off. Reportedly, the couple had given the hospital custody over two Bulldog pups for a week, and the pups were to be neutered two days into their stay. However, when one of the pups died of an anaesthesia shot, the couple starting demanding answers. They also claimed that the Cy-Fair Animal Hospital had cremated the puppy without formal permission, which stopped them from conducting a necropsy to ascertain the cause of death. Consequently, they sued the hospital and its three founders for negligence, breach of contract, and emotional distress.

Apart from this controversy, ‘The Vet Life’ has had a smooth run, and seems to be quite popular among audiences – it enjoys a good rating of 8.3/10 on IMDb.

The Vet Life Season 5 Release Date: When will it premiere?

Season 4 of ‘The Vet Life’ premiered on April 6, 2019, but in the time that has elapsed since then, Animal Planet has not announced any renewal. That being said, we expect the show to be renewed for another season, as there’s plenty of material in a vet’s life for a good reality show for pet owners and animal lovers. Our best guess is that if the show does get renewed, ‘The Vet Life’ Season 5 of can release sometime in April, 2020. We will update this section as soon as we hear more.

While we wait for news on the future of ‘The Vet Life’, here is a sneak peek into the show to give you a glimpse about what being a vet can be like. If you haven’t seen the show yet head over to Animal Planet to catch all the episodes of the previous seasons.