The Walking Dead S10 E9: When and Where to Watch? 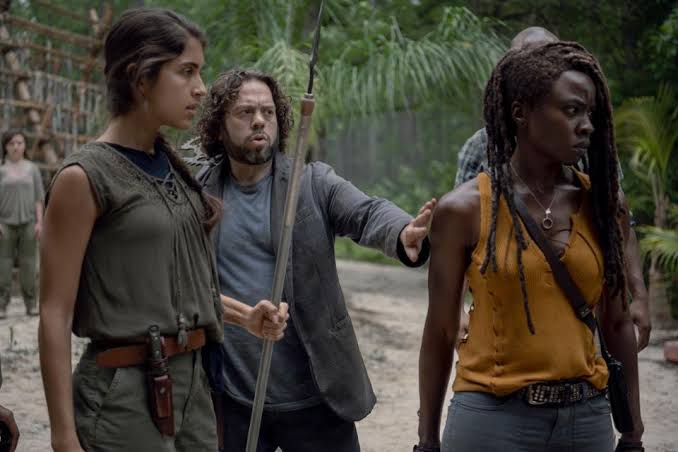 ‘The Walking Dead’ season 10 premiered on October 6, 2019, following which it aired for eight episodes before going on a mid-season break on November 24, 2019. Season 10 follows the survivors as they still deal with the threat posed by the Whisperer, who continues to showcase his horrible yet immense power. The team struggles while “reluctantly respecting the new borders imposed on them, all while organizing into a militia-style fighting force, preparing for a battle that may be unavoidable” — as described by AMC.

In the mid-season finale, titled, “The World Before”, we meet a new character named Virgil, desperately attempting to return to his family inside a fortified naval ship, which he had left to get supplies. The first thing he does is save Luke’s life but this makes Michonne suspicious. When Michonne questions Virgil, the latter makes a deal — in exchange for his freedom, he would offer her the weapons in his ship, which would suffice to kill several walkers.

On the other hand, Alexandria is forced to kill the walker form of Siddiq when he tries to devour the crying Coco. Gabriel, meanwhile, realizes Dante’s mission of trying to spread paranoia and in a fit of fury, stabs him to death — something which goes against the order of civilized humans. The episode ends on a cliffhanger, with the team reaching the spot Mary had told them about. But after their arrival, there’s no horde at sight and instead, Carol spies Alpha staring at them. They start chasing her but they are led into a dark cave and find themselves trapped atop a rocky platform.

So, where does the story go from here? Read on and you will know what to expect from the upcoming episode, i.e ‘The Walking Dead’ season 10 episode 9.

The Walking Dead Season 10 Episode 9 Release Date: When Will It Premiere?

After its long hiatus, season 10 will return to embrace its regular, weekly schedule of airing one new episode every Sunday night at 9 PM ET.

Where to Watch The Walking Dead Season 10 Episode 9 Online?

You can watch the latest episode of ‘The Walking Dead’ if you have a cable connection, by tuning in to AMC at the above time slot. You can also watch the released episodes online by logging into AMC’s official website.

If you don’t have cable, there are several other options where you can live-stream the already-released episodes with a paid subscription — such as YouTube TV, Philo TV, Sling TV, and Direct TV. Additionally, episodes are also available for purchase on Amazon Prime Video.

AMC recently released the official artwork for the second half of season 10. The posters show Daryl, Carol, Michonne, and Alpha gearing up for war with the tagline “We Are The Walking Dead.”

So, it can be predicted that episode 9 will revolve around these characters taking the center stage. Michonne seems to be all set to pursue her new quests in another location after she leaves with Virgil.  Meanwhile, Daryl and Carol will have a huge role to play during the escape from the trap with the horde.

There are also speculations that fan-favorite characters, who had been killed off in earlier episodes, like Carl Grimes, Jesus, Abraham, and Glenn may arise from the dead.

Barring the trapped members in the cave, there are others who still need to escape from their confines of grief and suspicion. Since the Whisperer War is just around the corner, the survivors must band together to end the threat permanently. Otherwise, there’s no doubt that Alpha will lead them to certain doom.

You can check out the mid-season premiere teaser trailer for season 10 below: