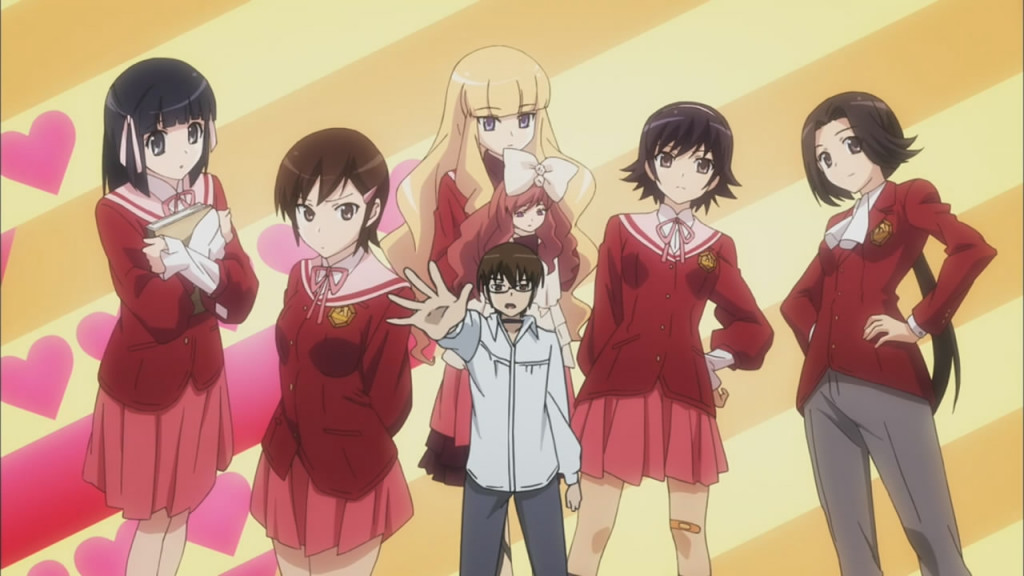 ‘The World God Only Knows’, also known as ‘Kami Nomi zo Shiru Sekai’, and abbreviated as ‘Kaminomi’, is a Japanese shoujo manga series written and illustrated by Tamiki Wakaki. With over 268 individual chapters published by Shogakukan in their popular magazine ‘Weekly Shōnen Sunday’ between 2008 and 2014, it has now been compiled into 26 different tankōbon volumes and 3 anime seasons.

The anime adaptation is carried out by Manglobe and it aired in Japan from 2010 to 2013. It is presently licensed by Sentai Filmworks in North America, who also produced an English version of it. It was first announced by Shogakukan in their magazine ‘Weekly Shōnen Sunday’ in 2010 to massive appraisal from fans. The adaptation generated a lot of hype since the manga was a hot topic back then and also due to a lot of notable names in the industry being part of the project.

The script of the anime is written by Hideyuki Kurata of ‘Read or Die’ and ‘Gun Sword’ fame. The characters are designed by Watanabe Akio, who also goes by the name ‘Poyoyon Rock’, while the series is directed by Shigehito Takayanagi. With such notable names working on it, fans of the manga knew that they were in for a wild ride! While the animation and the dubbing were handled by Manglobe, Crunchyroll announced that they will be streaming the show online on their servers. A total 3 OVAs have also been produced for the anime with all the rights to them being held by Sentai Filmworks. The first one was bundled with the 10th volume of the manga series and serves as a prologue to the entire story.

The first season of the anime aired in Japan between October 6th and December 22nd, 2010 on TV Tokyo with the English version following shortly on Crunchyroll in North America. The second season started airing on April 11th, 2011 and continued till June 28th, 2011, producing a total of 12 episodes similar to the first season. The second OVA episode titled ‘Kami Nomi zo Shiru Sekai: 4-nin to Idol’, which literally translates to ‘The World God Only Knows: 4 Girls and an Idol’, was bundled together with the 14th manga volume on September 16th, 2011 in DVD format.

The first and the second seasons of the anime are also available in DVD and Blu-ray format, both dubbed and subbed in English. The third OVA was released in two parts with the 19th and 20th volumes of the manga respectively and was titled ‘Kami Nomi zo Shiru Sekai: Tenri-Hen’ in Japan and ‘The World God Only Knows: Tenri Arc’ in North America. The third season of the anime is titled ‘Kami Nomi zo Shiru Sekai: Megami-Hen’ and was aired in Japan from July 8th, 2013 on TV Tokyo. The English version titled ‘The World God Only Knows: Goddesses’ was simultaneously cast by Crunchyroll in North America. A fourth spin-off OVA was also developed, titled ‘Magical Star Kanon 100%’, that came bundled with the 22nd volume of the manga, but this is not considered to be a part of the original series. The third season and the OVA both focus on the character of Kanon and are extremely well received by the fans.

The manga managed to become the fourth highest selling series of that week, with over 50,000 copies being sold. It also ended up as the 21st highest selling manga volume in Japan with over 30,000 copies being sold between January 20th and January 26th, 2009. The third volume of the manga sold about 80,000 copies altogether, cementing its position in the industry. Many consider the manga to have clichéd themes but they also praise it for its ability to keep the material fresh even after so much exploration in the genre. I mean, demon girls and a cast of high school women are enough to trigger the attention of many, but being able to accentuate the same with intelligent humor is what sets this series apart from so many other anime out there.

The World God Only Knows Season 4 Release Date: When Will it Premiere?

The World God Only Knows season 3 premiered on July 8, 2013 and ended its 12 episode run on September 24, 2013. There have been no direct references to a Season 4 in development. This is mainly due to the fact that the manga has stopped circulating. If the writers decide to produce new material for the series, then we are sure the developers are going to revive it for further seasons. However, nothing is set in stone and even though multiple rumors have surfaced in the past, none have ever come to fruition.

If we do get word of an official statement, you can be sure that we will update The World God Only Knows season 4 release date right here. But till that time comes, we are stuck with the original 3 seasons and the 4 OVAs. It is here that we highly recommend the manga series to fans of the genre. It is very well written with just the right balance of humor and fight sequences. The artworks are also extremely well done and if you are transitioning from the anime to the print material, then you will be surprised at the depth of the characters here.

The English dub of the anime is licensed and released by Sentai Filmworks in North America. It is available in both physical and digital formats with the online streaming rights being currently held by Crunchyroll.

The World God Only Knows Plot:

The main plot of the story revolves around the character of Keima Katsuragi, an efficient video game player who is kind of leading a double life. When it comes to role playing games, also known as gal games, he is often regarded as one of the best. These games are pretty hilarious and require the player to interact with young anime styled girls. Due to his expertise in the games, he is often regarded as ‘The God of Conquests’. He is able to control and win over any girl that happens to cross his path. This has rendered him quite popular among his immediate peers online.

However, Keima’s real life outside of the games is something of a disaster. Unable to translate the same level of success as he would online, he comes off as a geek and is a subject of ridicule among his friends. Here, the double life aspect of the anime comes into focus as he is called ‘otamega’ by his peers. ‘Otamega’ is an insulting play on the words ‘otaku’ and ‘megane’. Megane literally means glasses and this is directly targeted towards his weak eyesight and the fact that he spends most of his time in front of the computer screen. While juggling both his personas, he one day receives a weird email containing an invitation to ‘conquer girls online’. Perceiving it as one of the many game requests that he regularly receives from others, he proceeds to accept the same, not thinking too much about it. However, to his surprise, a demon girl from hell appears in front of him and thanks him for accepting the request.

The girl proceeds to introduce herself as Elsie, a demon hunter from hell, much to Keima’s surprise. She goes on to explain that she is currently facing a huge problem and would like him to help her out. Several demons have escaped from their realm and she being the demon hunter has been tasked with retrieving them. These are known as ‘loose souls’ and they have the ability to posses the hearts of young girls and feed off their negative emotions. In the process, they become whole again while rendering their host an empty shell. She suggests that the only way to save these girls is to conquer them, make them fall in love with him and make them feel wholesome again. This shall fill the gaps in them, where the evil spirits hide, thus freeing them in the process.

Having no experience in dealing with real life characters, let alone girls, Keima is freaked out by the request but is also a little intrigued nonetheless. He does decline the offer from Elsie but the demon girl states that the clauses were already agreed upon when he accepted the request online and that the deal has already been made. Having no other way to refuse the demon, he proceeds to travel around with her and ‘conquer’ the hearts of girls, freeing them in the process.

The World God Only Knows Characters:

Keima Katsuragi: Keima is the main protagonist of the story and is known by many as ‘The Capturing God’ due to his skills at online gaming and the ability to capture any soul he comes across while playing his games. However, he leads a very normal life offline, with stark differences in popularity. One day, he receives a mysterious invitation to a game which he proceeds to accept without knowing the consequences that lay ahead.

Elsie: Elsie, also known as ‘Eryushia de Lūte Īma’, is the one responsible for sending the mail to Keima. She is a cute little spirit hunter who is charged with collecting loose souls from the human realm. She recruits Keima through the email and the duo set out to collect all their targets. She poses as Keima’s illegitimate sister in order to keep an eye on him.