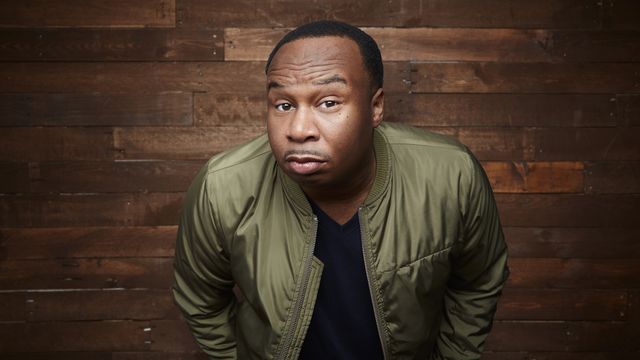 This Is Not Happening is a storytelling show based in America. Roy Wood Jr. is the host of the show. He replaced Ari Shaffir as a host after season 3. This Is Not Happening airs on Comedy Central which is an American cable television network. The show first premiered on 22 January 2015. It was originally a web series for the year 2013 and 2014. It is the first series to be adapted from the digital platform by Comedy Central to its cable network. The first episode of the series was available for streaming on 12 January 2015 on Amazon. Ari Shaffir, Eric Abrams and Samantha Saifer are the creators of the show. Eric Abrams, Samantha Saifer and Jeff Tomsic are the executive producers of the show. Saifer, Abrams, Mark Palansky and Jeff Tomsic serve as the directors and showrunners. Every episode of the show runs for 30 minutes. Comedy Central and Levels Audio Post are the production company handling the show. Comedy Central is also the distributor of the series.

This Is Not Happening Season 5 Cast: Who is in it?

The cast of the series includes Roy Wood Jr. (Daily show correspondent) as the host and presenter of the show. It also features some popular comedians such as Paul Scheer, Joe Rogan, Steve Rannazzisi, Marc Morgan, Keegan- Michael Key, D.L. Hughley, Rob Corddry and many more.

This Is Not Happening Season 5 Plot: What is it about?

This Is Not Happening features the host and some comedians who tell funny stories in front of the audience. Real life, hilarious stories are shared on specific subjects in each episode. This Is Not Happening provides comedians with a great platform to tell personal, true stories that usually involve supreme embarrassment, degradation, humiliation on their parts which they revel in sharing with an audience and garnering their praises. Every episode of the show begins with a specific topic for the day where comedians tell true and insane stories based on a particular theme like drugs, family, etc. It showcases a platform to present their comic skills and being able to give outstanding stand-up performances. It is one of the shows on TV on which a lesser known comedian can dream of appearing on one day. The show features story-telling in a detailed manner by being performed by stand-up comedians, musicians and more. The show proves its point that real life experiences are always the best material to work with.

The subjects of stand-up varies from being caught cheating, getting rejected by a childhood crush, getting caught smuggling drugs, facing humility at a billionaire’s birthday party, discussing about life battles, sharing craziest and insane drunken stories, growing up with not-so-perfect fathers, how one falls in love with a gutter punk, learning the meaning of “rock bottom”, encountering a talented heckler, getting into a fight with a nun and much more.

This Is Not Happening Season 5 Release Date: When will it Premiere?

The air date of This Is Not Happening season 5 is not announced yet. There is no such update on the renewal of the show either by Comedy Central Channel. The last episode of the previous season was aired on 7 April 2018 which indicates we shouldn’t necessarily rule out the possibility of a season 5. Stay tuned! We will update this section as soon as we hear something.

This Is Not Happening Season 5 Trailer:

Here is the official trailer for season 4 of the series by Comedy Central. Have a look and prep yourself to roll on the floor with laughter.