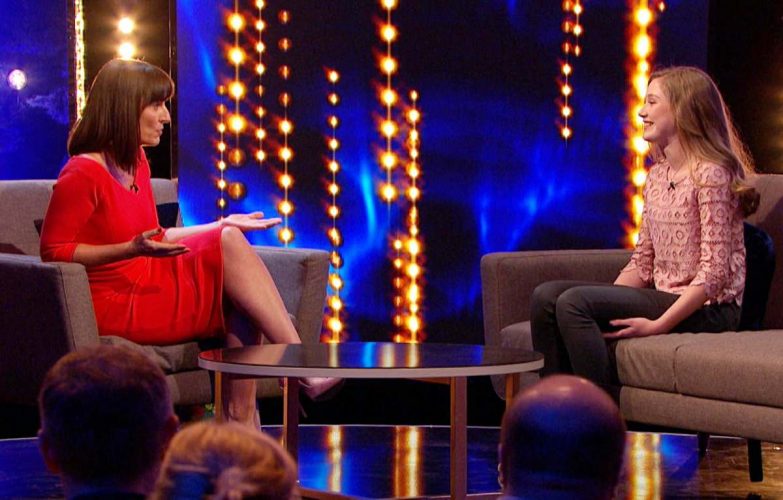 This image is strictly embargoed until 00.01 Tuesday 8th May 2018 From Twofour Production This Time Next Year: SR2: Ep6 on ITV Pictured: Host Davina McCall with contestant Elan Parry. This photograph is (C) ITV Plc and can only be reproduced for editorial purposes directly in connection with the programme or event mentioned above, or ITV plc. Once made available by ITV plc Picture Desk, this photograph can be reproduced once only up until the transmission [TX] date and no reproduction fee will be charged. Any subsequent usage may incur a fee. This photograph must not be manipulated [excluding basic cropping] in a manner which alters the visual appearance of the person photographed deemed detrimental or inappropriate by ITV plc Picture Desk. This photograph must not be syndicated to any other company, publication or website, or permanently archived, without the express written permission of ITV Plc Picture Desk. Full Terms and conditions are available on the website www.itvpictures.co.uk For further information please contact: iwona.karbowska@itv.com / 02071573043

‘This Time Next Year’ is a British reality television show that airs on ITV. The series first premiered on November 2, 2016. The production company backing the project is Twofour. The show is presented by Davina McCall.

Elaborate proclamations promising significant feats have been a part of humanity ever since the earliest recorded use of written language. In old English poetry, the heroic ethos of the protagonists warrants that they often boast of old achievements, while vowing to make new ones. These promises are so common to date that they are ingrained in our culture. Politicians make promises all the time. But jests aside, all of us always do set out with a daily, monthly, or very often a yearly goal. Every New Year’s eve, social media is filled first with new year’s resolutions, additions to our bucket lists and what not.

Strangely enough, such a widely observed humane phenomenon does not have much currency in reality TV. But this is where ‘This Time Next Year’ comes in. ITV’s rendition of the show does not innovate an idea from scratch, but rather builds upon an identical Australian reality TV show of the same name, which aired in 2017, powered by 9Now. The basic idea of the show is that weekly contestants will make an oath to keep such-and-such resolutions, which they purport to fulfill over a 12-month period.

This Time Next Year Cast: Who is in it?

The cast of ‘This Time Next Year’ is thoroughly reliant on the show’s structure, which warrants that most of its primary focus goes on the weekly contestants themselves, with the only person in the crew who’s in limelight is the host. In that regard, all the casting that matters for ‘This Time Next Year’ is already rather predictable. Davina Lucy Pascale McCall, formerly the presenter of ‘Big Brother’ during its 2000-2010 run on Channel 4, has been an excellent fit in the shoes of the host for ‘This Time Next Year’, and although the length of her contract with the producers is no public record, it is safe to assume that Davina will be returning as the host in the upcoming season too. We also hope to see new contestants being thrown into the mix since they keep things interesting for this series.

This Time Next Year Plot: What is it about?

The plot of ‘This Time Next Year’ includes displaying people making oaths and promises about their personal ambitions within a 12 month period. The show then fast forwards this time to revert back to those who made the promise to see if they can walk the talk and if these promises have already been fulfilled.

In its standard 6-episode structure, ‘This Time Next Year’ features a set of contestants in each episode who make a yearly resolution – which can be anything ranging from an overweight person striving to lose weight, a couple wishing to finally have a baby, a single mother attempting to open a cupcake factory, to an amputee vowing to champion a triathlon. Some of these proclamations sound heroic in their own right, while others commonplace by comparison – but these are all life-changing decisions for the contestants. Some of these come true and earn a standing ovation. It is as much about the promise as its execution. When we make a promise, we make it to ourselves more than to another person, and the series tests if we can keep our promises to ourselves.

What stands out about the show is the leap in time it takes. Once we are introduced to the promises, we suddenly jump 12 months forward in time to see the drastic change or lack thereof in the lives of the people who promised to bring changes. While the mind-boggling aspect of a 12-month jump is something that the miracle of television achieves, what is even more intriguing is whether the promises were kept. It is part of the human instinct to follow a story through to its conclusion, and this is where the series comes in. We are introduced to a character, made to identify a problem, and then we see if the problem has been rectified or persists. That is the basic format of the show.

One criticism of show is that it tries to dramatize the events too much, and more than realistic promises, we get to witness a ton of soppy stories. Moreover, most of these stories tend to end in successes, and Davina expresses adequate elation at this development. However, if there is one thing that is true, it is that people prefer not to be humiliated on national television, which might be why they are more motivated to fulfill their promises in the first place.

Hopefully, the series will continue in a similar manner, and under the capable hosting prowess of Davina McCall, we will see these individuals be the heroes and the inspirations in their own lives, as they set goals for themselves, and then go about trying to achieve them, bettering their lives in the process.

This Time Next Year Season 4 Release Date: When will it premiere?

‘This Time Next Year’ Season 3 premiered on February 5, 2019. While there have been no talks on ITV’s part to renew or cancel the show, the international popularity of the format of the series might be a factor that is pitted against the mixed domestic critical reviews that the show has gotten. While The Guardian did not mince words, saying that the show is like a comic relief minus the laughs, other countries have leaped at the opportunity to televise such a series. Even before it reached the UK, the patent had already been adopted by many European countries – Germany (RTL), Holland (RTL), Denmark (TV2), Belgium (VRT), and Spain (Atresmedia) to name a few. All things considered, ITV is likely to greenlight a new season and ‘This Time Next Year’ Season 4 should air sometime in 2020.

This Time Next Year Trailer:

While we wait for an update on season 2, check out the clip below to refresh your memories.