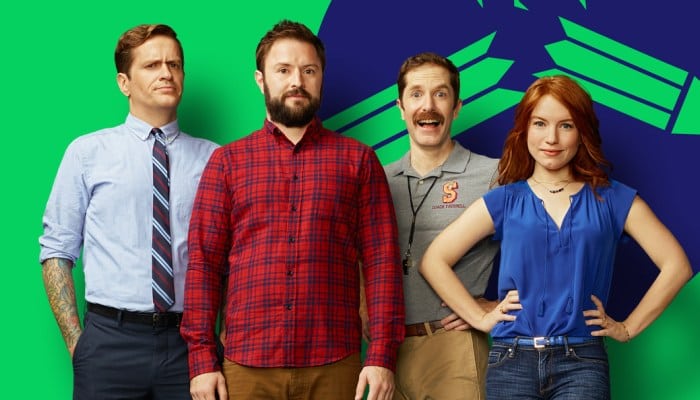 ‘Those Who Can’t’ is an American comedy-drama television series that airs on truTV. Created by comedians Adam Cayton-Holland, Andrew Orvedahl, and Ben Roy from the Denver-based comedy troupe called The Grawlix, the show follows three dysfunctional high school teachers who struggle to motivate their students as well as themselves.

The show was initially slated to be produced by Amazon Prime Video, which paid $50,000 for the pilot episode. However, Amazon did not go ahead with the show, the rights to which were later picked up by truTV, making ‘Those Who Can’t’ truTV’s first-ever full-length scripted comedy series.

Season 1 of ‘Those Who Can’t’, consisting of 10 episodes, premiered on February 11, 2016, but even before its premiere, truTV, on December 1, 2015, renewed the show for a 12-episode Season 2, which premiered on October 6, 2016. Despite the show’s failure to find favor among television critics, truTV, on January 5, 2017, renewed it for its third season, which premiered two years later on January 14, 2019. Here’s everything we know about the next season of ‘Those Who Can’t’.

Those Who Can’t Cast: Who is in it?

‘Those Who Can’t’ primarily revolves around its three dysfunctional high school teachers. Co-creator Adam Cayton-Holland plays the role of Loren Payton, who is portrayed as a self-absorbed and narcissistic Spanish teacher with an affinity for alcohol, and little to no affinity for teaching. Meanwhile, co-creator Andrew Orvedahl plays gym teacher and volleyball coach Andy Fairbell, who has a good heart but poor social skills, and is often the target of many jokes. Finally, co-creator Ben Roy plays the role of history teacher Billy Shoemaker, who is portrayed as a former high school punk rocker with a dysfunctional family and a history of touring with his punk band, Capitalist Emulsification.

Apart from the three main protagonists, Maria Thayer plays school librarian Abbey Logan, who has a passion for life, but is also capable of depravity when pushed. Rounding up the list of main cast members is Rory Scovel, who plays the role of Principal Geoffrey Quinn, who looks up to Payton and is as incompetent as the three main characters.

These cast members aside, ‘Those Who Can’t’ has also seen guest appearances from some well-known personalities, including actor Michael Madsen (who has worked extensively with Quentin Tarantino), comedian T.J. Miller, and professional wrestling legend Kurt Angle.

Those Who Can’t Plot: What is it about?

Before we start, it’s important to observe where ‘Those Who Can’t’ gets its title from. Well, for those unaware, the show’s title is a spin on a quote – “He who can, does. He who cannot, teaches” – from George Bernard Shaw’s 1903 play, Man and Superman. And interestingly (while I disagree with Shaw), the quote captures the essence of what the show is all about.

Set in a fictional Colorado school called Smoot High, ‘Those Who Can’t’ chronicles the (mis)adventures of the three protagonists, Payton, Fairbell, and Shoemaker, who are shown to hate their jobs. Far from inspiring and enlightening their students, Payton, Fairbell, and Shoemaker are troublemakers themselves, and are as infantile as the students they are tasked with nurturing. From getting even with students who pester teachers, to grooming nerds into cutthroat school-level politicians, the protagonist trio seem to have their hands in every nasty cookie jar. Through each season, we see the trio involved in some mischief or the other, even as they struggle to contend with their own personal problems and frustrations.

Of course, the foul language and often suggestive humor strips the show of sophistication, but then again, ‘Those Who Can’t’ is not a show that aims to be sophisticated. The juvenile pranks which the trio, and even librarian Logan sometimes engage in are often very funny, and the show’s quality is enhanced by solid performances from its cast. That being said, the show hardly does brings anything new to the table, albeit the propensity of its characters to crack a joke at every opportunity is pretty impressive.

As far as reception goes, ‘Those Who Can’t’ enjoys decent popularity among viewers, and has an overall rating of 7.2/10 on IMDb. Television critics, however, have not enjoyed the show, and the critics’ consensus for Season 1 on Rotten Tomatoes reads: “Those Who Can’t is sporadically funny, but its attempts at light-hearted comedy are undone by derivative writing and a crude, somewhat depressing tone.” While Seasons 2 and 3 are not rated on Rotten Tomatoes, Season 1 has a poor score of 40%.

Those Who Can’t Season 4 Release Date: When will it premiere?

Season 3 of ‘Those Who Can’t’ started airing on January 14, 2019, but since then, truTV has not made any announcements pertaining to the future of the show.

As far as ratings and viewership are concerned, Season 3 has not performed well, and it would not come as a surprise if truTV decides to cancel ‘Those Who Can’t’. However, we cannot say for certain till an official announcement is made. truTV is expected to make its decision soon, but our best guess is that if the show does get renewed, it will release sometime in early 2020.

Those Who Can’t Trailer:

While we await news on the future of ‘Those Who Can’t’, here is the trailer for Season 3 to give you a glimpse into the comedy-drama.