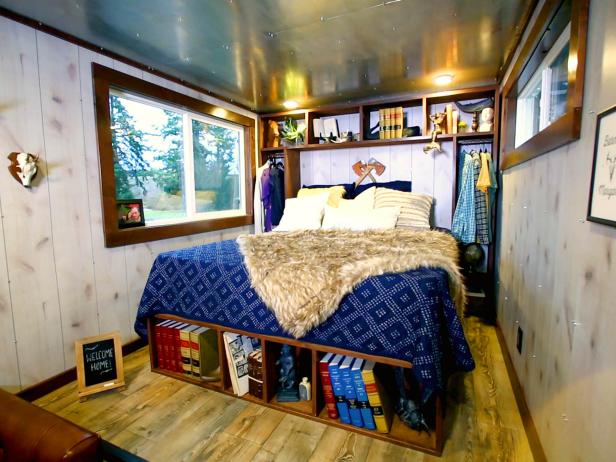 ‘Tiny Luxury’ is a reality series that first premiered on September 15, 2015, on HGTV. The show features a company named Tiny Heirloom that builds beautiful designer houses in small and limited spaces. Designers mostly find it relatively easier to create fancy designs when they have ample amount of space. They can go wild with their creativity and try different looks for different corners of the house.

The real concern starts when they have to build and design in tiny spaces. Do not think that we are just talking about relatively ‘small’ spaces. The series takes on modifying spaces as tiny as 140 square feet. Imagine the amount of challenge one would face while converting such little spaces into something luxurious with all the amenities and facilities that a modern-day family requires. ‘Tiny Luxury’ is a show just about that. While we have seen many real estate shows in the past, ‘Tiny Luxury’ takes a different approach to the same subject.

The show has had a successful run for three seasons already, and fans must be wondering about whether there will be a Season 4. We are here to delve into that, right after we share a look at the show’s details.

Tiny Luxury Cast: Who’s in it?

The main cast members are, of course, the primary members of the Tiny Heirloom company. The Francis family – Brianna Francis, Jason Francis, and Zach Francis are at the front and center of the show. The siblings Tyson Spiess and Michelle Spiess are also the prominent cast members.

The talented group of builders and designers do a fantastic job in every episode and as the show is based on their company, Tiny Heirloom. We obviously believe the mentioned names will remain part of the cast in the upcoming season as well. Also, there are no extra narrators in the show currently, and Brianna and Jason do a great job as wonderful hosts.

Tiny Luxury Plot: What is it about?

The show starts with Lauren and Kalani going to Tyson and Michelle for a tiny home with a big kitchen in Seattle. In the following episodes, the team builds and designs a tiny cabin-like home, a home with maximized floor space for the family’s pets, another tiny house with modern kitchen and spa-like bathroom, three-bedroom home in a 250 square-feet space, and an ultra-lightweight house.

Over the seasons, different families have different demands and Tiny Heirloom proves that you do not need to cut short on your dreams just because you do not have enough space. From creating a rock-climbing wall to designing luxurious trailers, the team members do everything in their capacity to provide dream homes to their customers.

The last season of the show expands many existing tiny houses. The team builds modern kitchens and bathrooms with maximum optimization of space possible, and also introduces individual living spaces under one room for big families living in tiny houses.

Generally, the families living in such tiny houses and seeking help from Tiny Heirloom are families who cannot and do not want to afford big houses. They want to save for other purposes in life like traveling and their children’s future. The show also features couples who are beginning their own families by leaving their lavish lives behind.

Tiny Luxury Season 4 Release Date: When will it premiere?

‘Tiny Luxury’ Season 3 premiered on May 3, 2018, on HGTV. The season was spread across 5 episodes and the last episode released on June 14, 2018. The majority of the people in today’s world are living in small houses. The show is practically for all of them. Tiny Heirloom and its members show how luxury can be found even in the tiniest of spaces. If you have a niche for creativity and designing, believe us, the show is just perfect for you.

There is still some time until the release of ‘Tiny Luxury’ Season 4 as no official announcement has yet been made. We like to believe that ‘Tiny Luxury’ Season 4 will release around May 2020. The audience can expect even tinier houses and bigger dreams in Season 4. We can also hope for more personalized tricks from the designers for different types of homes.

There is no official trailer of ‘Tiny Luxury’ Season 4 yet but, you can catch the clip below to get an idea of the show.