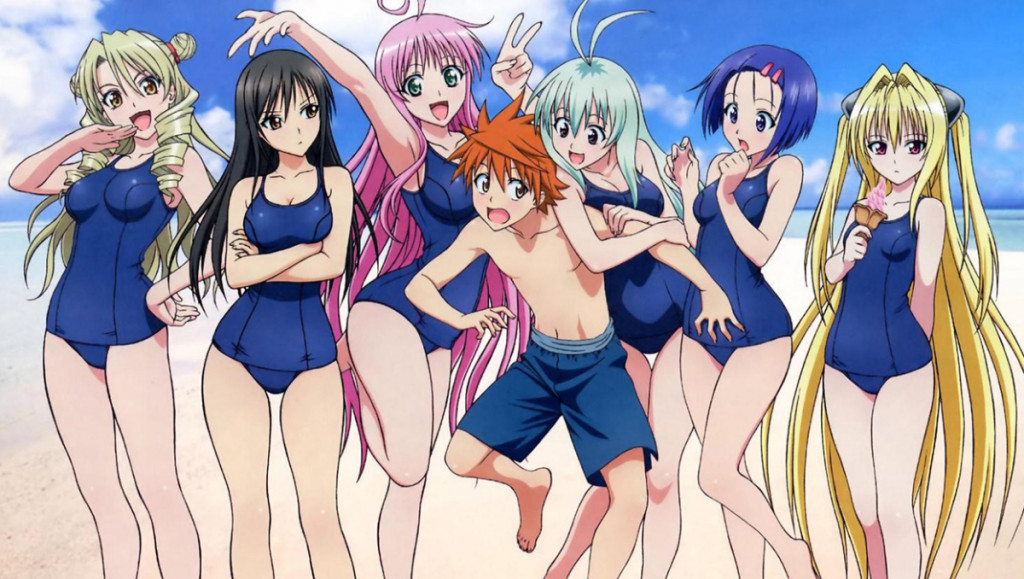 ‘To Love-Ru,’ which in its Japanese form is a pun on the English words ‘love’ and ‘trouble’, strives to highlight how one is non-existent without the other. It is a manga series written by Saki Hasemi with illustrations provided by Kentaro Yabuki. The series was published in Shueisha’s popular magazine ‘Weekly Shōnen Jump’ from April 24, 2006 to August 31, 2009 in 18 tankōbon volumes. A drama CD was also released in the year 2008 that introduced a completely new storyline. Due to the popularity of the manga, an anime was quickly put into production with the first season being aired from April 2008 to September 2008. It contained a total of 26 episodes and laid the groundwork for the sequels and the spin-offs that were to come. Six OVAs were also produced and released in Japan between April 2009 and April 2010.

The anime adaptation is produced by Xebec and directed by Takao Kato and is often cited by many as a weak adaptation of its manga counterpart. It does not take many influences from its source material and strives to introduce new quirks in order to keep it entertaining for the television screens. However, while trying to achieve this, many felt that the anime fell short of its expectations and deliberately sabotaged its own identity in exchange for a few laughs. While it does use the characters and themes from the manga, it changes the order of the events in order to better fit the format. Personally, we feel that the anime would have been much more appealing if they had just stuck to the plot as proposed in the manga. It is presently licensed by Sentai Filmworks and distributed by Section23 Films in North America. The entire first season is available on a blu-ray disc to purchase online.

To Love-Ru Season 5 Release Date: When will it premiere?

To Love-Ru season 4 premiered on Jul 7, 2015 and ended its run on Oct 29, 2015. Since then, there have been no official announcements for a new season of the anime but as Saki Hesami has already stated that there will be a new manga coming out soon, an anime is not a far-fetched thought. It is important to note here that the series has witnessed its fair share of scandals over the years, which may or may not affect the production of a new season. Though most of them were unrelated to the content of the manga or the anime, it still affected its sales and sometimes disrupted its distribution policies.

While researching on a new season of anime, we came across some interesting facts that we thought were relevant to this discussion. One such incident occurred when a mother found a copy of the manga containing a picture of a woman with full frontal nudity. She went on to mail a copy to the Tokyo Metropolitan Assembly to review whether it meets the standards as declared by the infamous Bill 156. At a later session, the assembly concluded that even though the manga did contain full frontal nudity, it still met all the standards and the case was dropped. However, we all know how such allegations are perceived by the masses in general and are yet to see whether it had any impact on later developments.

There is one more incident that we would like to bring to notice here but it’s hard to confirm the accuracy of these reports, so take these with a grain of salt. It seems the illustrator of the series, Kentaro Yabuki, got into trouble with his wife over the custody of their child and various intellectual rights. The story goes that the woman claimed various royalties from Kentaro, including the revenue from the popular manga ‘To Love-Ru’. It seems like this is the main reason why the series had to stop their actual serialization and develop a spin-off. It’s impossible to actually verify the sources and the credibility of this information but it does seem to make sense when you look at the bigger picture. Anyway, if there’s anyone reading this who can shed some more light on this story, then please let us know and we will definitely update it here.

There is one more ‘issue’ plaguing the development of a new season and I stress here on the word ‘issue’. I mean, this is not really an issue all things considered but it is delaying the development process anyway, so it deserves a mention! Yabuki Kentaro, the aforementioned illustrator of the series, is currently working on another project, ‘Darling in the Franxx’, which is about halfway complete. He has already stated that he will resume work on ‘To Love-Ru’ as soon as that project is over. So if the source material is the problem behind the development of a new season, that shouldn’t be the issue any longer. Considering the time that a manga series takes to develop and then print, we can expect ‘To Love-Ru’ season 5 release date to be sometime in late 2020 or early 2021. Yes, it’s kind of a long wait but there are tons of other materials like the OVAs and the original manga series to keep ourselves occupied in the time being.

To Love-Ru Plot and Characters:

‘To Love-Ru’ follows the storyline of Rito Yūki, a high school student who has major problems confessing his love for his high school crush, Haruna Sairenji. The anime does take a lot of liberty when it comes to portraying the various ways in which Rito gets stopped in his tracks while trying to confess his love. Right from the very first scene in the anime, we get to see Rito trying to devise ways to get Haruna to talk to him but fail miserably. We are then greeted with them passing by each other in the corridor and again Rito fails to make the move. Whether it’s something like a small flower pot or a horde of elephants (yeah, it gets absurd just about here), Rito is never able to gain the upper hand when it comes to confessing his love. It is at this moment that Rito swears that he will propose to Haruna the next time he sees her.

Now, I know what all of you are thinking. Something absurd will happen that will prevent Rito from carrying out his task but what actually happens blows everything out of proportion. A spaceship crash lands right in front of Rito and this is just the beginning of his troubles. As he goes back home and takes a shower, his bathtub explodes and a naked girl suddenly appears out of nowhere leaving him flabbergasted! To his surprise, he finds his hands on top of her breasts (which we later come to find out is a way of proposal in their culture).

Anyway, as Rito makes his way back to his bedroom, the girl introduces herself as Lala, the princess of Deviluke, an alien planet. She is on the run from her parents and as a means of escape used her spaceship and landed on Earth, accidentally ending up in Rito’s bathtub. At this moment, two agents from her home planet appear and attempt to take her back, but Rito stands up for her and helps her escape. It is at this point that she starts admiring Rito and follows him all around school much to the surprise of his classmates and Haruna. They were under the impression that Rito had a soft corner for Haruna and were shocked at his deceit.

Rito, still having a soft corner for Haruna, tries to convince her of his innocence in the whole matter but somehow the antics of Lala get in the way…again! At one point, he even manages to propose to Haruna but Lala timely gets in the way and accepts his proposal. This is where the comical aspect of the anime kicks in full drive with the introduction of Zastin, Lala’s brother. Zustin, who first attacked Rito for defending Lala when she was escaping from them, now wants Rito to marry Lala as they are engaged! Rhito is shocked out of his wits and faints under pressure.

Lala, as a means of staying on Earth, tells her brother that they are engaged and will get married to Rito. Zastin now congratulates both of them on their engagement and proceeds to introduce himself to Rito’s family as one of their own. Rito, who’s completely caught out of the act, tries to escape but is not able to do so due to the watchful eyes of Zastin. When Rito enquires Zastin about when they got engaged, Zastin proceeds to explain that touching the breasts of another woman is a means of proposing in their culture. That fueled by the fact that Rito actually proposed accidentally completely renders Rito’s excuses useless and he is forced into the engagement.

Rito attempts one last try towards freedom as he hypothetically asks Zastin if there are any ways of revering the engagement, hypothetically speaking. We stress on the word hypothetical because Zastin draws his sword on Rito at the very first signs of escape and Rito needs to constantly assure him that the conversation is taking place hypothetically.

Later, Zastin tells him that there is one way of reversing the engagement and that is to undo what set forth the events in the first place. Somehow this translates to touching her breasts again…and hey, we are not judging! Rito needs to do what he needs to do!  However, this act must take place within 72 hours of the initial act so Rito has very limited time to undo the process. He gives it his best efforts and even though he comes close every time, something or the other prevents him from the final act. 72 hours pass and Rito is officially engaged to Lala. The anime goes on to portray how Rito tries to juggle his new life with his life-long crush, Haruna, and he even somewhat starts to like Lala but that’s treading on spoilers, so we won’t go there.