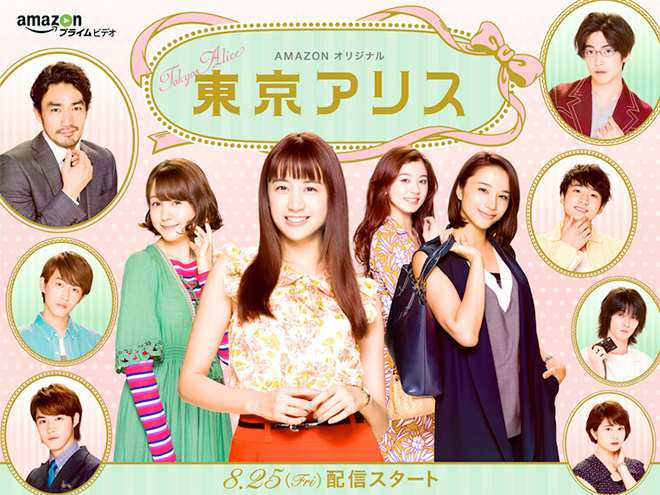 Amazon Prime seems to be stocking up its catalog with a bevy of Japanese dramas. And one among the many series that definitely deserves a mention from this list is ‘Tokyo Alice’. An adaptation of the Japanese romance Josei manga series of the same name, which is written and illustrated by Toriko Chiya, it focuses on female friendships and their several ups and downs. The story revolves around four former school friends and besties who live in an apartment in Daikanyama, Tokyo. Each is in pursuit of her own happiness and this romantic drama chronicles the lives of this foursome as they navigate life, love, and career. ‘Tokyo Alice’ is directed by Takeo Kikuchi and Natsuki Seta and is written by Kumiko Asô.

Tokyo Alice Cast: Who is in it?

Tokyo Alice Plot: What is it about?

‘Tokyo Alice’ introduces us to Arisugawa Fuu, employed in a design production firm. A shopaholic, she does not have much time for romance and spends most of her salary on clothes, shoes, and other fashionable knick-knacks. She gets transferred to work under Okuzono Shinji aka the “Iceman”, a cold and frigid boss, who often overloads her with multiple assignments. He forever finds fault in her work, leading to Fuu’s increased aggravation. She gets solace by confiding with her friends and former schoolmates. But here’s the twist! What happens when Fuu finds out that she is falling for her boss? To add to the complications, Fuu starts dating her colleague, Odagiri Shun, a queer asexual guy who is disgusted by sex. However, he wants to marry her. Torn between her feelings for her boss and sexually frustrated with Shun, she literally lands herself in a soup.

Fuu’s buddies include Haneda Mizuho, a manga artist, who has recently broken up with her boyfriend. She is the most thoughtful among the four and still grieves for her loss. Eventually, she does learn to let go and accept life as it comes. Then comes Sakuragawa Rio. Although popular and lively, she has no time for romantic link-ups and dedicates herself to practicing psychosomatic medicine. At her workplace, she meets the relentless stalker, Izumi Atsuto, who seems to be deeply in love with her. But she doesn’t reciprocate and simply asks him to stay away. In fact, Rio secretly likes someone. But who is the mystery man?

The wealthy Enjoji Sayuri keeps on meeting prospective marriage partners and finally decides that she should get married. This is when she proposes to the girls that they should live in Daikanyama to spend the last of her single-hood days without a care in the world. Fuu and Mizuho move in with her in the same apartment, whereas Rio decides to stay separately. The extremely rich Sayuri Enjōji is the owner of the house that the girls live in.

Enjōji’s sole aim of moving to the new apartment is to experience “all kinds of eroticism”. All set to indulge herself in a sex marathon throughout the year, she brings in any guy she meets to the apartment, much to the chagrin of her roomies. But then she meets Hiyama Akio and the vain Enjōji finds herself falling in love with this mysterious man. ‘Tokyo Alice’ is a sweet, humor-filled drama that brings with it several life lessons, told from the experiences of these four best friends. To top it all, it is basically a story about celebrating womanhood and female friendships, through all its ups and downs.

Tokyo Alice Season 2 Release Date: When will it premiere?

The original manga on which the story is based comprises 15 volumes. Therefore, the makers may have a lot of tales to tell about the lives of these four lively and lovely women. Hence, if you ask about a sequel, we can positively say that you can hope for one soon enough. However, we have not received any official announcement yet. But if the creators do recommission the show for another installment, we can expect ‘Tokyo Alice’ Season 2 to release on Prime, sometime in June 2020. We shall update this section with more concrete news as and when we learn more.