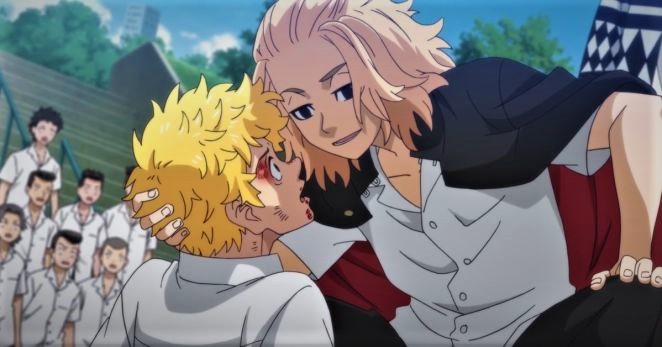 ‘Tokyo Revengers‘ is an action drama supernatural anime that primarily focuses on Takemichi Hanagaki, a good for nothing freeter who failed to achieve anything worth remembering. The monotonous life of the 26-year-old takes an unexpected turn when he gets inexplicably transported twelve years in the past moments before a train takes his life. Since he recently learned that his former girlfriend Hinata Tachibana and her brother Naoto were murdered by the Tokyo Manji Gang all those years ago, Takemichi wastes no time to inform the latter about the approaching doom. When he returns to the present time, the protagonist realizes that he managed to change the past and, in turn, the future by saving Naoto, thus creating a time paradox in the process.

The first episode of the anime series premiered on April 11, 2021. Based on a Japanese manga series of the same name written and illustrated by Ken Wakui, the action-packed show immediately became a big name in the anime world thanks to its emotional premise and captivating storytelling. The perfectly executed character development proved to be the cherry on the top, and ‘Tokyo Revengers’ understandably became one of the most popular anime of 2021. After the season finale concluded on a cliffhanger, viewers are eager to learn more about the show’s second installment. In case you are looking for more information on the same? We have got you covered!

If you are wondering about the show’s upcoming installment, here’s everything we know so far. Liden Films is yet to announce the renewal of the series officially. The eponymous manga that inspired the show has been the third best-selling series in the first half of 2021- just behind ‘Demon Slayer: Kimetsu no Yaiba‘ and ‘Jujutsu Kaisen.’ In April, it even surpassed the former, after consistently out-selling ‘One Piece.’

The anime adaptation has been received with similar enthusiasm by the fandom, and it is arguably the best show of 2021 so far. The season finale ended on a cliffhanger with Takemichi either dead or unconscious, leaving viewers scratching their heads. With no dearth of source material to cover and impressive ratings, the renewal of the supernatural action anime seems inevitable. There have already been rumors that it is under production, and the creators are waiting for the right time to announce the release date.

However, without an official update, we can’t verify the claims. The production work of the first season was completed by May 2021, so Liden Films Studios is expected to reveal the release date of the latest installment sooner than later. In light of all the aforementioned information, we estimate ‘Tokyo Revengers’ season 2 to premiere sometime in Summer 2022.

Tokyo Revengers Season 2 Plot: What Can it Be About?

In the season 1 finale, Valhalla, also known as Headless Angel, gets affiliated with Toman. But, when Kisaki gets credited for it, Takemichi seems somewhat disturbed. Chifuyu, who has been thinking of leaving the gang, announces that the protagonist will take over the 1st division. It seems that Takemichi is one step closer to his goal after becoming a highly-ranked executive of the gang. Furthermore, when he returns to the present, his life has changed for the better, and he is no longer the good-for-nothing freeter.

Later in the episode, Kisaki invites Takemichi and Chifuyu for a drink. He confesses of having played an indirect role in Baji’s death, but before the duo can do anything, they get dizzy and lose consciousness. When Takemichi wakes up, Kisaki kills Chifuyu in front of his eyes and turns to the protagonist with ominous intentions. The antagonist then proceeds to fire another shot leaving the end up to viewers’ imagination.

In season 2, it will be revealed that Takemichi only blacked out because of his injuries in the last episode and is completely safe. Luckily, Kazutora comes to rescue him just in time and helps the protagonist before things go horribly wrong. The viewers will also learn about the shocking betrayal by Mikey, who has been secretly taking out Tonma members influenced by the Black Dragons’ money. To make matters worse, Hinata is still not alive in the future, meaning Takemichi has got a lot of things to fix in the upcoming installment.