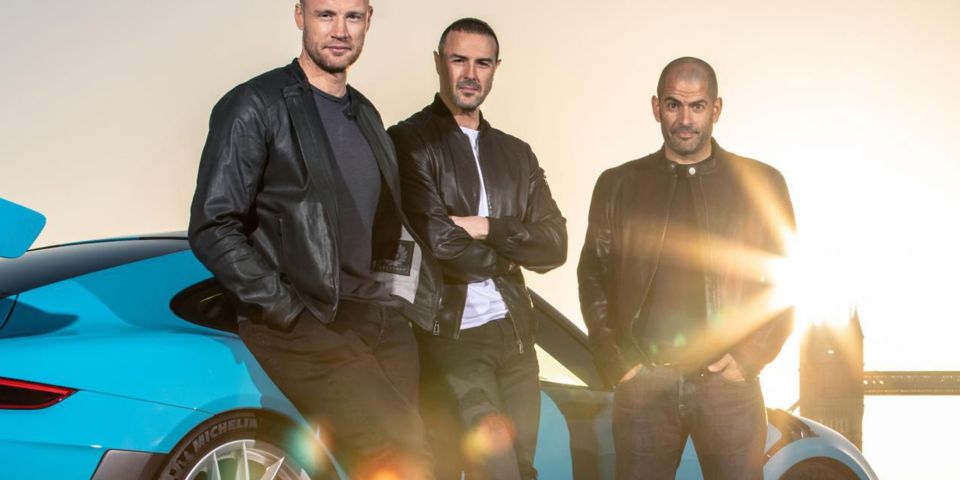 ‘Top Gear’ is a non-fiction tv show that airs on BBC Two. The motoring entertainment show first premiered on October 20, 2002, and is based on the original 1977 show of the same name. The award-winning series has Jeremy Clarkson and Andy Wilman to thank as its creators, and the two revamped the original show, building off its popularity. With BBC Studios as the production company, ‘Top Gear’ has Maggie Gibson, Kate Shiers-Ghellere, Peter McCann, Gary Broadhurst, Pat Doyle, Alex Renton, Grant Wardrop, Chris Hale, and Oisin Tymon as producers. Andy Wilman used to be on board as the executive producer but left after the fracas with the producers and his old school friend Jeremy Clarkson led to the latter being dropped. Aurora Mulligan and Clare Pizey are acting executive producers of the show.

Directed by Brian Klein and Mark McQueen, ‘Top Gear’ also has various spin-off shows like ‘Top Ground Gear Force’, ‘James May’s Cars of the People’, ‘Top Gear of the Pops’, ‘Stars in Fast Cars’, and ‘Extra Gear’, among others. This show focuses on the challenges as well as special races a car has to go through to pass the test. Sometimes, the show is presented in a controversial as well as a quirky and humorous format. It has gained popularity due to its presentation and visual style.

Top Gear Cast: Who is in it?

‘Top Gear’ has had a ton of hosts over the seasons like Jeremy Clarkson, Richard Hammond, Jason Dawe, Chris Evans, Chris Harris, Matt LeBlanc, Rory Reid and many more. The hosts mainly talk about the car specifications, how they are fueled as well as latest cars in detail. They also provide reviews of the vehicles based on their performance. While this might not sound like a very difficult job, no one did it quite as well as Jeremy Clarkson.

According to BBC Clarkson’s presentation helped in turning “a slightly worthy motoring consumer programme into an entertainment show that was funny, irreverent, highly-produced and a hit around the world”. Over the seasons Clarkson became more than a presenter and almost was recognized as the show’s soul. However, following the fracas, he was out and was followed by several other presenters who brought their own flavor to the show.

In the next season, Matt LeBlanc is returning to host the show after he realized that he could contribute more to ‘Top Gear’ and reportedly because he received a lot of fan mail requesting him to return as a presenter. LeBlanc might return if the deal between the show makers and his agents is finalized and will assuredly bring back the chemistry and charm in the presentation that we saw from him in earlier seasons.

Top Gear Plot: What is it about?

‘Top Gear’ has become one of the most successful tv programs of BBC. It has also become an important series in British popular culture where the episodes are aired in various countries like South East Asia, North America, and Europe. Various merchandise of this show is sold worldwide that includes books, special DVD editions of the show, live tours and more. This show is also broadcasted in other countries like the United States, China, Australia, France, and South Korea. Each episode of the show centers around various segments. It is taped in the main studio in front of the live audience, and the pre-recorded videos are broadcasted in an episode. Each segment contains links and breaks such as Challenges, Car Reviews, Races, Power Laps, Cool Wall and Star in a [insert the iconic Jeremy Clarkson pause]… Car.

In Car Reviews, the presenter shows a road testing of the cars where they consider some factors like speed, reliability, ride, quality, handling and much more. Car Racing is also an important part of the show format where the presenter showcases numerous cars from reputed manufacturers, either on the Top Gear tracks or on the roads of Britain or abroad. Power Laps focuses on the featured car undergoing timed laps on the show’s tracks. Star in a Car, as the name suggests, is about a celebrity who partakes in a timed lap before being joined by the presenter to talk about how their performance was. Challenges started off with the premise of having absurd vehicular feats like a bus jumping over motorcycles or a nun driving a monster truck. However, this segment evolved to include a challenge between the presenters, and some of these challenges were ‘Cheap Car’ where the presenters had to compete with each other by buying a second-hand car on a limited budget while keeping to the prefixed restrictions like which decade the car would belong to.

Other challenges include ‘Car Creation’ where the presenters have to create a car. The tagline of these challenges often is “How hard can it be?”. One of the most interesting segments of the show is Races and there are various categories of these races carried out, including “Car vs public transport”, “Novelty Race” where the presenters raced against unusual opponents like marathon runners, pigeons, postal service, “Cross City Race”, “Motorsport Race” and “Specialised Race”, in which presenters determine the variables which will guide the race. The Cool Wall is another segment of ‘Top Gear’ where the presenters look at cars and features and determine whether they are cool or not.

Mostly, the show might be all about cars on the surface, but underneath all of it is the slightly tragic tones of British blokedom. The show established itself more because of its merciless teasing, banter, and spontaneity than because of cars. The entire British shtick of funny and likable characters who are heroically uncool and prone to grumbling made it well-loved by audiences. ‘Top Gear’ went beyond a factual show a long time ago and entered the realm of British sitcoms and dealt with flawed blokes who loved cars. Hopefully, in the upcoming season, the show will continue in a similar fashion and continue to amaze us with its facts and entertain us with the way it is presented.

Top Gear Series 27 Release Date: When will it premiere?

‘Top Gear’ Season 26 premiered on February 17, 2019. As far as next season goes, BBC hasn’t made an announcement yet but it is expected that show will be renewed. For the last three years, the show has been airing in the early part of the year, so our best guess is that ‘Top Gear’ Season 27 is going to release sometime in February or March, 2020.

‘Top Gear’ Season 27 does not have a trailer yet. You can check out the trailer for Season 26 of the show to get an inkling of what the future season might hold.