When Will Tosh.0 Season 12 Premiere on Comedy Central? 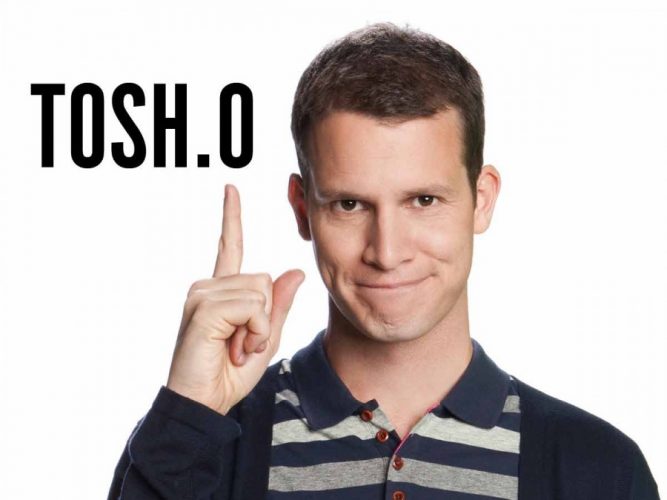 ‘Tosh.0’ is an American television comedy series that airs on Comedy Central. The show first premiered on June 4, 2009. It is presented by comedian Daniel Tosh who makes fun of the latest viral videos, websites, internet fads, blogs, and more. He also provides a “Web redemption” to the silly people out there who have humiliated themselves enough online with their stupidity.

‘Tosh.0’ has been created by Mike Gibbons and Daniel Tosh and is directed by Scott Zabielski. The series has noted for the hilarity, which mostly comes from the extended material which is performed. Those who are familiar with E!’s ‘Talk Soup’ might realize that ‘Tosh.0’ has a similar core premise. It has also been marketed to similar demographic groups and launched at the moment when computers, video cameras, television, and internet access converged across all devices as well as all walks of life. No wonder, the series has spawned 11 seasons to date. Here is when it will air its next iteration.

‘Tosh.0’ is hosted by Daniel Tosh whose humor is what the series thrives on. Tosh provides news on celebrities, popular culture, society and stereotypes in a controversial and humorous style laced with sarcasm. His satire has made him famous not only on social media but also across the world. Very few have an observation as sharp as Tosh, and it may be the reason why the show managed to garner a solid fan following and reach more than a million viewers.

He is joined by supporting cast members as and when the performative comedy requires so, but there are no other fixed cast members who appear as regularly as Tosh himself. Daniel Tosh will return for season 12 because without him there’s no show.

Each episode of ‘Tosh.0’ begins with a humorous opening where new, short viral videos from the internet are shown to viewers and live audience. Tosh adds his reviews and comments on the video clips and pictures in his humorous style. He also makes jokes about various other things in about 20 seconds and features a “Video Breakdown” at the end of each episode, which is a video compilation. He wittily speaks about the video’s themes, comedy, and action elements. He also performs a short scene from one of these viral video clips. The range of clips usually includes spontaneous cuteness, romance, fetishism, exhibitionism, surrealism, accidents, whimsical performances, gore, vomit, stunts, acute bodily harm, among other things.

However, two of the most fascinating segments are ‘Web Redemption’ and ‘Is it Racist?’. In the former, Tosh invites the stars of the viral videos onto the show, and through a manner of cajoling, using black humor, parodying, and even bullying, Tosh and the star explore the subject matter, attempting to recreate it and giving the star a chance to redeem themselves. In the latter, Tosh shares a video and invites voters to engage in an interactive experience where they decide if the content has racial stereotypes or not. The degree of active engagement with viewers, aside from encouraging them to live-tweet during the show itself, has made ‘Tosh.0’ extremely popular.

The success of the show is not just in terms of the content but also in how little money it takes to actually make it. Considering that the fans have taken to it, the series is one of the darlings of the network since the clips that Tosh makes fun of are available for free download and use on the internet. As we had mentioned, the show arrived at a time when access to everything across all walks of life was converging thanks to the internet. The show does just that, it takes a look at pop culture through the lens of the internet.

In season 12, we might see memes on top of the clips. With meme culture at an all-time high, sanctity is a notion of the past, which makes it the ideal time for a show like ‘Tosh.0’ to shine, and considering how good Tosh himself is in bringing his brand of comedy to us, there are no doubts that the future of the series is indeed bright, and full of laughs.