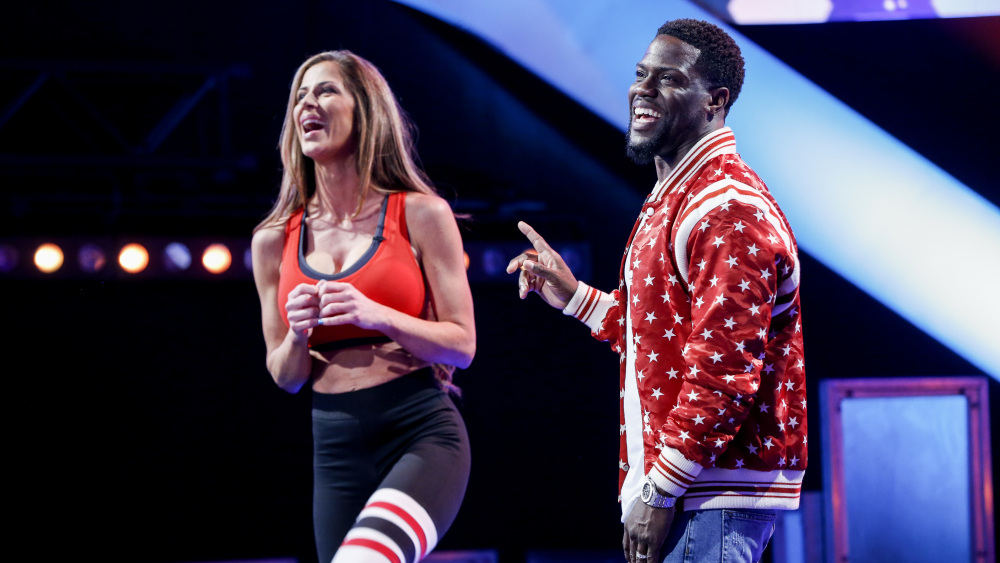 ‘TKO: Total Knock Out’ is an American obstacle course competition that airs on CBS. This sports show first premiered on July 11, 2018. It is hosted by comedian Kevin Hart who is famous for his roles in the ‘Ride Along’ movies and ‘Jumanji: Welcome to the Jungle‘.

Created by Steve Hughes and Sean Kelly, the show is officially described as “a new one-hour obstacle course competition series hosted by Kevin Hart.” TKO: Total Knock Out features people from all walks of life, where one player races through daunting obstacles while four other contestants are manning battle stations along the course, firing over-the-top projectiles in an attempt to knock them off and slow them down. It’s a physical and funny “us versus them” scenario, with the fastest finisher winning a cash prize.

Obstacle courses have always gotten the blood pumping for both viewers and participants. There is a thrill in seeing contestants go through a degree of physical exertion to win a cash prize. It is almost like watching a sport, except for the fact that this is a game show. Some other popular shows in the same vein have been ‘Wipeout’ and ‘American Ninja Warrior‘.

Total Knock Out Cast: Who is in it?

Each episode features five contestants who battle it out to finish at the top. While Kevin Hart remains the host throughout the season, the contestants change in each episode. A winner emerges at the end of each episode as well and gets a cash prize. In the upcoming season too, we expect Hart to return as the host once again while we cannot wait to see who the new contestants are, and how they perform. As we already mentioned, the contestants can come from various walks of life, so there is always an increased degree of relatability among the viewers of the show.

Total Knock Out Plot: What is it about?

‘Total Knock Out’ is all about fighting your way to the top amidst all the obstacles laid down. Putting to test the contestant’s brawn and brain, this show offers a cash prize to the winner. Each episode has five contestants out of which only one can win. This race is designed in such a way that there are obstacles that the contestant has to maneuver and overcome while the others are busy targeting them with projectiles to distract the player or force them to abandon the obstacle. The contestants redesign their plans while learning from each other’s mistakes and improvising as they go. The two contestants who go to the final round battle it out between themselves and the winner is given a cash prize.

For those unfamiliar with the exact format of the show, let us break it down for you. There are four zones in the course that the contestant has to go through. The others man battle stations and fire projectiles to knock them off or impede their progress. The first zone is ‘The Ball Blaster’ where contestants navigate narrow ledges which are attached to plexiglass panels that they can hold on to. All the while, they can be targeted by softballs from the canons at the battle stations. This is followed by ‘The Frisboom’ where contestants have to cross a narrow beam and a flexible bridge while being targeted by frisbee like projectiles. After this, comes ‘The Spike Launcher’ where the participants have to traverse a set of moving pedestals while spiked cubes are fired at them from the battle stations. The final zone is ‘The Slammer’ where the contestants have to cross the two spinning cylinders while giant sledgehammers are released from the battle station. In the last two zones, the projectiles are pre-aimed and they can only be released once each, whereas in the first two zones the remaining contestants can aim and fire as long as they do not run out of projectiles.

Contestants who are knocked off in a zone can reattempt the zone. The second knock off or fall off triggers a TKO. They can proceed to the next round but get a one-minute penalty. If anyone deliberately attempts to fail an obstacle, they get a five-minute penalty. In the final zone, the second cylinder has a time capsule attached to it. If any contestant grabs the cylinder to prevent being knocked off or to dodge the projectiles heading their way, they lose 90 seconds of their time. In all likelihood, the upcoming season will follow the same game rules, and we are in for some high octane fun.

Total Knock Out Season 2 Release Date: When will it premiere?

‘Total Knock Out’ season 1 premiered on July 11, 2018. The show received an okay rating but since game shows are always popular and target a wide spectrum of audience, there is a good chance that CBS will renew the show. Although there is no official news yet, but our best guess is that ‘Total Knock Out’ season 2 might release sometime August, 2019. Do stay tuned in for an official update.

While we wait for ‘Total Knock Out’ season 2, check out the season 1 trailer to refresh your memories.