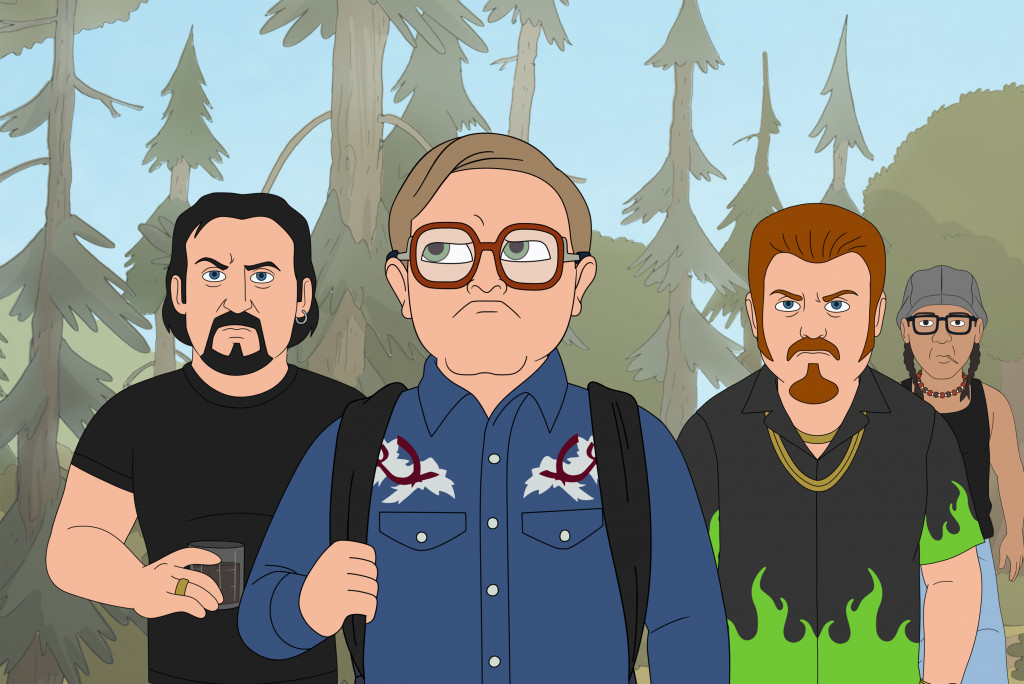 Trailer Park Boys: The Animated Series Cast: Who is in it?

The characters portrayed by each of these actors have their own trademark quirks. For example, while Julian assumes most of the leadership roles, Ricky considers himself to be dumb and has a short, fluctuating temper. He also owns a marijuana farm and is often prone to getting into tight situations. The spectacled Bubbles is a cat lover and Ray, who apparently is disabled and rides a wheelchair, is addicted to gambling.

Trailer Park Boys: The Animated Series Plot: What is it about?

The show is a continuation of  Clattenburg’s original film franchise of the same name that released its first installment in 1999. Owing to the wide acceptance by its viewers, Showcase picked up its series version in 2001. However, it ended its run on the channel after the release of the seventh season in 2007. After this, the eighth and subsequent five seasons aired on Netflix.

The central plot of this dark comedy-drama revolves mainly around the residents of the fictional Sunnyvale Trailer Park, in Dartmouth, Nova Scotia, namely, Ricky, Julian, and Bubbles. They are ex-convicts who try to make some quick cash by committing petty crimes while escaping from the cops. In this endless cycle, we usually see most of their attempts ending unsuccessfully and all or most of the miscreants ending up in jail. Sometimes, they even succeed in their quests, but again the next season explains how something had gone wrong in the middle, though everything seemed perfect at the beginning.

If you have religiously followed this show, you will know that the twelfth season’s finale ended on a huge cliffhanger, with all the characters being transformed into animated figures. The premise of the last installment begins with Bubble’s latest brewing enterprise, which is just taking off and looks promising. However, things are not quite the same with Julian and Ricky. Now, after getting a change of heart and attempting to abandon their dishonest ways, Julian embarks on a job searching mission and becomes a security guard, whereas Ricky takes up employment as a handyman. Lahey and Randy go to the race tracks for their own reasons.

Things soon take a chaotic turn when Julian faces troubles in his job and Ricky tries hosting a romantic dinner for Susan, that soon turns messy. Bubbles again falls prey to his quick temper issues when Ricky takes his truck and gives it to Julian — who wants it for tackling some racket he has created in the mall. Situations grow messier when an ongoing party in the park goes haywire, Julian’s job lands in complete jeopardy and even his prosecutor turns out to be his ex. Can things get any worse? Yes, of course! When an established beer organization approaches the group with $50,000 to close the deal, they are elated and organize another party. But soon, police sirens are heard and the boys need to take the escape route.

Trailer Park Boys: The Animated Series may not be officially the thirteenth season, but it picks up the show from where the previous installment had ended. The entire gang turns into cartoons and carries on with their fun antics that includes going on a mission to save a mountain lion friend and facing a rampaging bike gang. The season ends with the boys throwing a benefit concert featuring Helix to save Sunnyvale.

Trailer Park Boys: The Animated Series Season 2 Release Date: When will it premiere?

Trailer Park Boys: The Animated Series season 1 premiered on Netflix on March 31, 2019. As far as next season goes, we are confident Netflix will renew the show. Because why not? Animated shows are much easier to continue than feature shows due to several reasons. Firstly, there is not much dependency on actors. Then, there is already an infrastructure built that creators can re-use. With all of that in mind, we believe that  Trailer Park Boys: The Animated Series Season 2 can release as early as March, 2020.

You can watch the trailer and the full show right here.