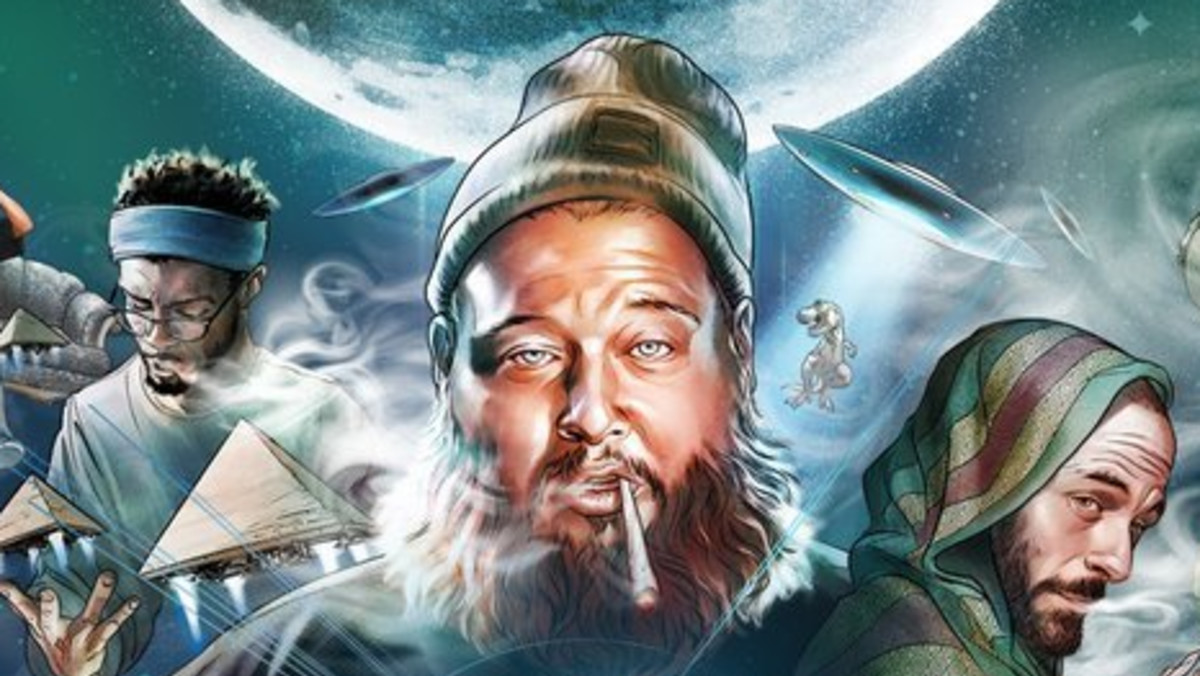 ‘Ancient Aliens‘, the History Channel masterpiece, that has spanned more than 150 episodes since its debut in 2010, is a documentary-style historical series that attempts to analyze if it was an alien intervention that resulted in the extinction of dinosaurs. According to the theorists featured on the show, extraterrestrial entities helped in the evolution and progress of humankind. Adopting conspiracy themes, coupled with ancient symbols, secret societies and cults, mysterious ruins, and shady data, it tries to support its claims with reasoning.

Although it’s not quite possible to simply accept all the ridiculous theories presented on the series, you should know one thing — it is definitely an enjoyable watch. And building up on this material is Viceland’s ‘Ancient Aliens With Action Bronson’. Producers Hannah Gregg and Jordan Kinley decided to create a show that would feature a group of rappers and artists, discussing the episodes of ‘Ancient Aliens’ while being completely out of their minds. The cast members sit on a couch, smoking marijuana, as they talk about the events depicted on the screen before them.

‘Ancient Aliens With Action Bronson’ is hosted by rapper Action Bronson. The tattoo-covered artist is a chef-turned-rapper, who is easily recognized by his red, shaggy beard. He is best known for his mixtapes ‘Blue Chips 2’ and ‘Dr. Lecter’ and album ‘Mr. Wonderful‘. Bronson has also appeared on Vice’s ‘Fuck, That’s Delicious’, a food documentary that chronicles his trials with food and travel. He is the perfect host for ‘Bronson and Friends’ as ‘Ancient Aliens’ happens to be his favorite show.

Apart from Bronson, the series also features The Alchemist as his co-host. The duo is accompanied by several of their artist friends from the entertainment industry, including Schoolboy Q, Knxwledge, Earl Sweatshirt, Andy Milonakis, Melissa Etheridge, and Tyler, the Creator –– who join them in the most absurd discussions across the episodes.

If the show is renewed, you can definitely expect Action Bronson to be back as the host.

What is Ancient Aliens With Action Bronson About?

‘Ancient Aliens With Action Bronson’ features Bronson and his buddies binge-ing on episodes of ‘Ancient Aliens’ and discussing the theories presented on the insanely weird series — all the while being high on weed. Multiple guest stars such as famous music producers, musicians, actors, and celebs accompany him on his couch as they watch ‘Ancient Aliens’ on a monitor while the show is green-screened behind them. The series brings in psychedelic elements via floating objects and is narrated in a free-form, unscripted manner.

In one of the episodes, Action and his friends reach extreme highs while watching The Mayan Conspiracy on ‘Ancient Aliens’. Then the stoners do agree with one of the claims that dinosaurs had been selectively eliminated by extraterrestrials. Again, they contemplate about some of the historic ruins and decide that these could not have been possibly made by humans. Meanwhile, Tyler smells weed and tries to identify the strain.

Next, the cast theorizes that aliens entered the planet in the form of genetically advanced men in order to harvest gold. They also discuss if aliens actually had a huge role to play in overall human evolution or if aliens are misinterpreted as angels. Action and friends again engage in deep conversations about why ancient societies were so obsessed with the Orion constellation. On another episode, the group takes up topics related to the Bermuda Triangle and the Zone of Silence. They think that maybe aliens might hold answers to these mysterious phenomena. Action and crew further learn how many natural disasters might be due to alien intervention and the current technology may have originated with aliens thousands of years ago. Or maybe our founding fathers did have knowledge about extraterrestrial entities.

The previous title ‘Traveling The Stars: Action Bronson and Friends Watch Ancient Aliens’ was an experimental title that came across as extremely outrageous and hilarious — not to mention with unexpected hints of philosophy. Porbably, that’s why Viceland decided to change it to a much simpler version: ‘Ancient Aliens With Action Bronson’

Ancient Aliens With Action Bronson Season 3 Release Date: When will it premiere?

The show is created as a complete non-statement series, with elements aimed to distract you, while making you feel utterly silly at times. But what keeps it running is its outrageously nonsensical yet funny moments. It looks lazy and as a result, avoids strict criticism.

Now, if you are wondering about show’s renewal, we would like to mention that Vice has not come up with an announcement yet. But in case it is renewed, ‘Ancient Aliens With Action Bronson’ season 3 can release sometime in July, 2020.

While we wait for ‘Ancient Aliens With Action Bronson’ season 3, check out the season 1 trailer below.