Will There Be a Treehouse Masters Season 12? 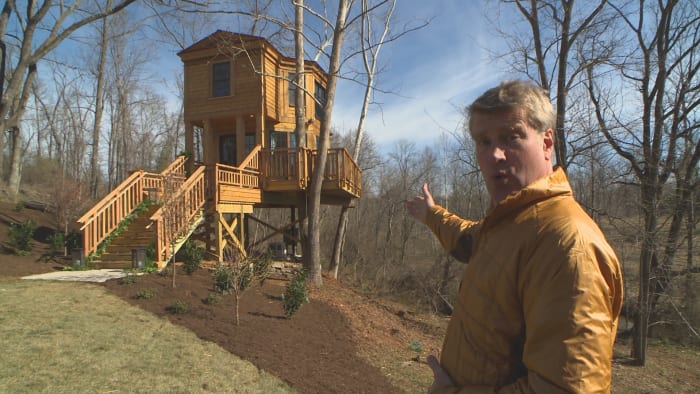 ‘Treehouse Masters’ is a reality television series that first premiered on March 31, 2013, on Animal Planet. The show has a simple concept- someone wants a specific type of treehouse and Pete Nelson builds it for them. People who have worked with Nelson and know him well, state that he is some kind of tree whisperer. He became passionate about treehouses at the age of 5 when his father built him his first treehouse. It was in 1987 that he built his own treehouse and he has not looked back since.

Pete Nelson runs his own business named Nelson Treehouse and Supply. He is also the owner of Treehouse Point, a bed & breakfast point based out of a treehouse. Now, you must be wondering that how a passionate treehouse lover, a businessman and also the author of multiple books (all based on treehouses, no surprise there) ended up with a reality show on Animal Planet.

He was working as a carpenter when he was first approached by a production company in 2011. The tiny houses were gaining popularity during that phase and the show-makers believed that Nelson’s skills would come in handy. Nelson took to the idea of hosting a reality series, gradually.

By the time he agreed to host Treehouse Masters on Animal Planet, he had just one condition – no drama! He was very specific with his terms. He did not want any fake or unnecessary drama in the show that the audience is used to watch in other reality series. “We’re building forts, for crying out loud. It’s hard to fight,” he said.

Pete and his team have built over 100 different eco-friendly treehouses in the 100 episodes spread across 11 seasons. If you are someone who is wondering how different can one treehouse be from another, we request you to speak to the show’s fans or watch the episodes right away. From multiple stories to different themes like meditative and chalet, Pete has built them all.

The show has been well received by the audience. You might think that the show has a limited and niche audience, but interestingly, the show has come up in some pop culture references as well. ‘You’re The Worst‘, an American comedy-drama on FXX, in one of its episodes, mentions ‘Treehouse Masters’ as one of Jimmy’s favorite shows. The character, who is at the center of the show, says, “Who knows when they might air another marathon of ‘Treehouse Masters’?” (Seriously though, who knows?). Daniel Tosh, a renowned comedian, in one of his acts on ‘Tosh.0‘ spoofed the show in 2016.

Even though the show always had steady ratings, after 11 seasons the series announced that it will no longer return for Season 12. You might be wondering why did the show go off air even after such good reviews from the viewers. Let’s find out.

‘Treehouse Masters’ Season 11 premiered on August 17, 2018, on Animal Planet. The season was spread across 8 episodes and the final episode released on September 29, 2018. In April 2019. Nelson announced that Season 11 was the last season of the show and now, no new seasons will premiere.

He wrote on his official blog, “I’d like to share the bittersweet news that we wrapped our final season of Treehouse Masters last fall—the eleventh season to air was our last. Many of you kind fans have been asking when you will see new episodes and therein lies the answer: after nearly seven years of shooting, we’ve said goodbye to the show.”

He did not disclose the exact reason behind this but mentioned that it was a collective decision that was taken together. “It was a collective decision, and we all felt that the time had come to feather off the gas and reflect on all the beautiful experiences we’ve shared together. Don’t worry, we’re still building treehouses—just not on television.”

The show has faced some controversies in the past and Nelson and his team have been fined charges for not having adequate legal licenses. While constructing treehouses in Oregon without a legal license, the crew and Pete were charged $5000 and $1000 by the Construction Contractors Board of Oregon. “Contractors need to know how to operate legally in whatever state they are doing business in,” CCB Enforcement Manager Stan Jessup said.

While this was one of the troubles faced by the crew, we do not believe that this was the reason for the show to go off-air. Nelson, while sharing his future plans with his fans wrote, “On the project front, our private builds are continuing full-force around the country, we also have a pioneering public project in development, the Cannaley Treehouse Village at Metroparks Toledo.”

He also talked about his hospitality projects – “At Treehouse Point in Fall City, Washington, my crew has spent the last few months upgrading the six existing treehouse rentals and drawing plans for a seventh, wheelchair-accessible treehouse. This seventh treehouse will be called “Ananda,” and she’ll be coming to Treehouse Point later this year!”

As loyal fans of the show and Pete Nelson, you can continue to follow his journey through his blogs. While we hope to see the show renewed in the upcoming years, for now, sadly, ‘Treehouse Masters’ Season 12 stands canceled.