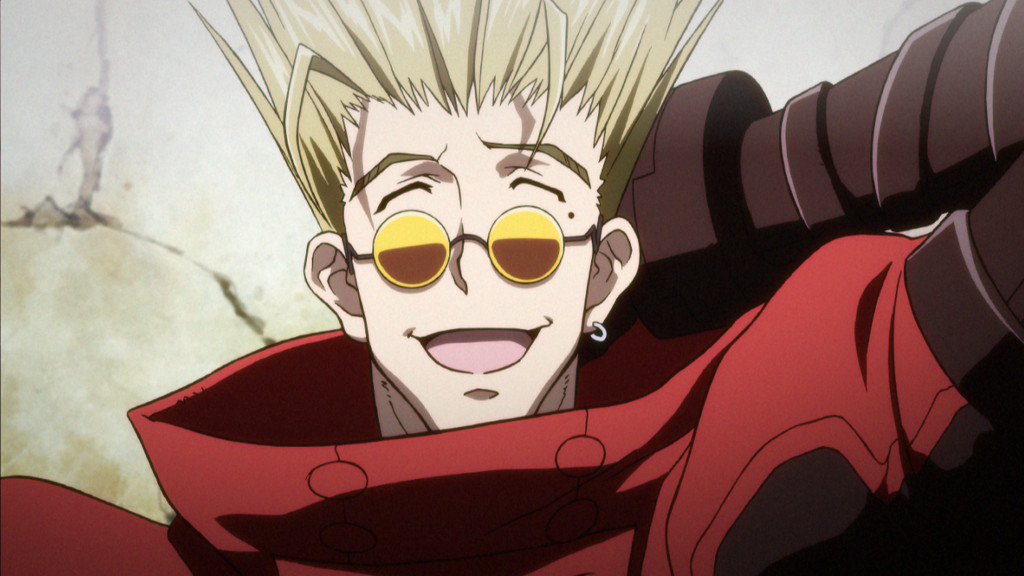 ‘Trigun’ is the brainchild of famed Japanese author Yasuhiro Nightow, who rose to prominence along with the popularity of this manga. It first premiered in the year 1995 in Tokuma Shoten’s ‘Shōnen Captain’ magazine where it was published till 1997, producing a total of 3 volumes. The series was then renamed to ‘Trigun Maximum (Toraigan Makishimamu)’ and continued publishing in Shōnen Gahosha’s ‘Young King Ours’ magazine where it remained till 2008.

The series spawned as a desperate attempt by Yasuhiro to retain his hobby of drawing anime characters back in the year 1993. He had then just passed out of college and was looking for independent jobs that will further his career as an illustrator. However, he still had to maintain a day time job in order to pay his bills and it was becoming increasingly difficult for him to maintain both the job along with his hobby. At one point, he even landed a contract with the popular publication where he had to produce a short manga series for the popular gaming franchise ‘Samurai Spirits’, but even this wasn’t enough to sustain his everyday life. Finally, after producing and submitting some rough sketches of ‘Trigun’ to various publications and countless reassurances from his friends, he finally quit his job in order to completely focus on his hobby.

His submission for ‘Trigun’ was accepted by Tokuma Shoten who started serializing the series two months later. After the magazine was cancelled in the year 1997, he was approached by Shōnen Gahōsha who continued to publish the series under the name ‘Trigun Maximum’ in their magazine ‘Young King Ours’. It is here that the series takes a far more serious tone and the jump from a shōnen to a seinen is quite visible. The storyline also jumps forward two years in order to keep up with this change. This is perhaps due to the fact that Shōnen Gahōsha wanted Nightow to work on an original series targeted towards a more adult and mature audience.

However, Nightow did not want to leave ‘Trigun’ unfinished and Shōnen Gahōsha, feeling sympathetic towards the situation, gave the green light. But Nightow made some changes to the atmosphere and the setting of the story in order to acknowledge the desires of the publishers, thus leading to a change in tone of the overall series. The series continued till February, 2008 producing a total of 14 tankōbon volumes.

The anime show is produced by Madhouse and is simply called ‘Trigun’. It is directed by Satoshi Nishimura and was aired on TV Tokyo on the 1st of April, 1998 and continued till the 30th of September, 1998 producing a total of 26 episodes. The original series did not receive much attention from Japanese audiences during its debut run but eventually grew into a commercial success after Cartoon Network aired it in North America in their popular block, ‘Adult Swim’. It is here that the series literally exploded overnight with the Western audiences becoming intimately involved with the franchise. A feature film has also been produced for the series named ‘Trigun: Badlands Rumble’, which was released in summer of 2010.

Trigun Season 2 Release Date: When will it premiere?

Trigun season 1 premiered on Apr 1, 1998 and ended its 26 episode run on Sep 30, 1998. The chances of the anime being revived for a second run is extremely unlikely given that no news have been released for the same in the last 15 years. In addition, the creator of the series, Yasuhiro Nightow has expressly stated that no new seasons for the anime will be produced, mainly due to the “finality” of the anime’s ending.

The original source material, i.e. the manga, has also ended in the year 2008 and no further news about its development was released by Nightow. The latest media entry into the series was the feature film which was quite well received by Western audiences, so a sequel in the form of a feature film or an OVA can never be written off completely. However, to expect a new season of the anime, given the current state of affairs, can be called optimistic at best. If anything changes and we come to know about Trigun season 2 release date, we will let you know.

You can stream the subbed and dubbed versions of ‘Trigun’ on Funimation, Crunchyroll, Amazon Prime, and Netflix.

The plot of ‘Trigun’ revolves around ‘Vash the Stampede’, Meryl Stryfe and Milly Thompson as they travel around the world trying to undo what has already been done. Vash is an extremely radical character but his heart is in the right place, often choosing non-lethal options over lethal ones in order to spare the lives of his enemies. He is presently suffering from retrograde amnesia which has erased all his childhood memories and this leads to a lot of consequences later on in his life.

Vash is constantly pursued by bounty hunters who claim that there is a huge price on his head, somewhere along the lines of sixty billion double dollars. He finds out that he is responsible for the destruction of an entire city but owing to his mental condition, is unable to recall the exact incidents. Therefore, he is forced into an elaborate game of cat and mouse with these bounty hunters who will stop at nothing in taking him out and securing the prize money for themselves. He does have rare flashbacks which provide him with limited information about the events that took place on that ill-fated day but apart from a blurred out scene, he is unable to figure out anything else. Thus, begins his journey of finding out the truth in an attempt to ultimately understand what happened on that day and clear his name.

Vash the Stampede: Vash the Stampede (simply referred to as Vash or Vasshu za Sutanpīdo in the Japanese version) is actually a sentient plant who is known as ‘The Humanoid Typhoon’ because of all the destruction which surrounds him. An exceptional gunslinger, he travels across the land in an attempt to clear his name. He also suffers from retrograde amnesia which renders the earliest memories in his brain inaccessible. After hearing rumors of an entire town being destroyed by a destructive humanoid, Meryl Stryfe, along with Milly Thomson, discovers Vash and decides to take care of him. They both are agents of an insurance firm and decide to travel along with Vash in order to learn more about the incident but mostly to clear up his mess.

Meryl Stryfe: Also known as Derringer Meryl, Meryl Stryfe is a worker at the Bernardelli Insurance Society who, along with her junior Milly, is sent to investigate the destruction caused by Vash. She is extremely hotheaded in nature and will lash out at the slightest of mishaps. She, however, can be very productive and intelligent when she wants to be. After discovering Vash, she simply refuses to believe that he is actually the one behind all the commotion and dismisses him for any other clown. However, she soon learns that Vash is actually responsible for the incident but refuses to believe that he is anyway involved with it deliberately. It is possible to understand from her gestures that she is not ready to perceive Vash as the criminal that everyone else portrays him to be. The two later develop a special bond and set out to make changes to the wrongs that have been done without their knowledge.

It is important to note here that the interactions between the two as portrayed in the anime are a bit different from what is actually present in the manga. In the anime, it is shown that her liking towards Vash is more romantic in nature while the actual manga portrays it to be one of mutual respect. This is a small minor difference that makes no changes in the actual storyline but it’s interesting to note the differences in tone and dialogue between the two mediums. She is also portrayed to be an extremely skilled gunslinger carrying around a variety of different pistols but unlike the manga, she does not have to resort to such tactics as often.

Milly Thompson: Also known as ‘Stungun Milly’, Milly Thomson is another agent at the insurance firm that Meryl works for and also happens to be her junior assistant. They are both sent together to investigate the damages caused by Vash but soon discover him to be completely innocent. She is extremely warm-hearted, optimistic and hard-working, which are traits that the team uses to its full advantage. She can mostly be found using her array of stun guns, some of which even have the ability to knock back trucks.