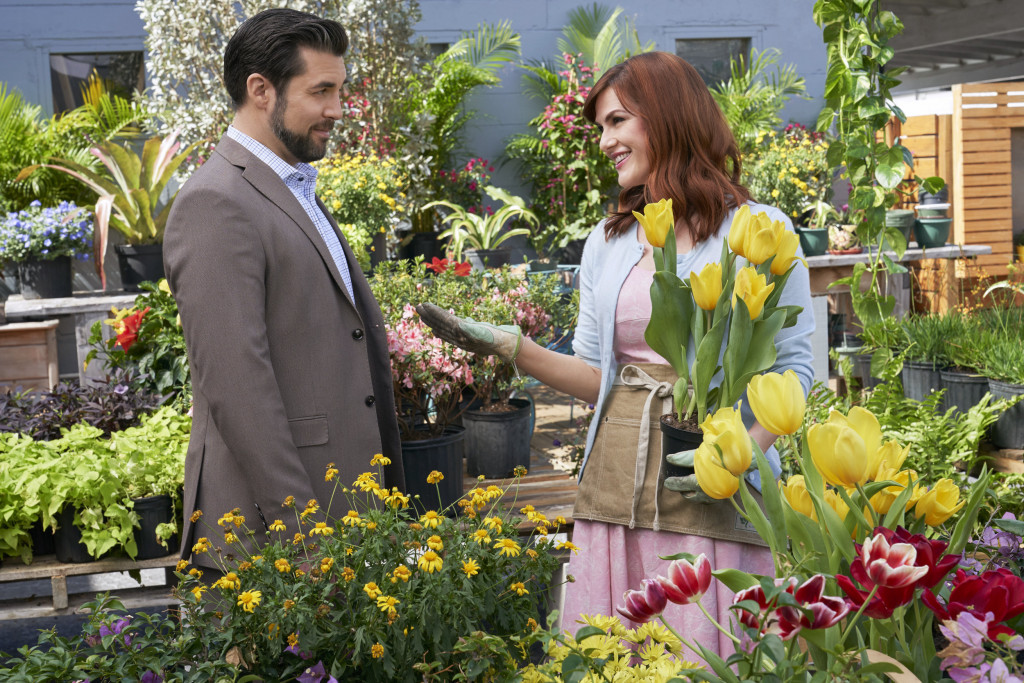 Hallmark channels’ True Love Blooms is a romantic comedy television movie starring Sara Rue and Jordan Bridges premieres tonight at 8pm E.T. With the unlikely romance between the polarizing personalities of Vikki and Chace as its central premise, ‘True Love Blooms’ simultaneously assumes artistic responsibility in its stance for a more ecologically healthy living environment. Also an executive producer of the television movie, Rue was instrumental in the development of the initial idea for the film. Apparently, the idea came to Rue from a community garden on the Upper West Side of Manhattan, where her parents were members during her childhood. In her interview with Parade, Rues said”I had so many happy memories in that garden as a child… until a developer bought the land, tore out the garden and built a building in its place.”

The Hallmark Channel is an American pay television network that is owned by Crown Media Holdings inc., which is in turn owned by Hallmark Cards, Inc. Primarily targeted at family audiences, the channel’s programming features a mix of television movies and miniseries, original and acquired television series, and lifestyle programs. As of February 2015, Hallmark Channel is available to approximately 85,439,000 pay television households (73.4% of households with television) in the United States. Despite largely being an apolitical brand, Hallmark Channel has garnered a following among politically conservative viewers in suburban and rural areas who feel the network and its original programming feed their desire to “express traditional family values and also to steer away from political themes and stories that denigrate religion.”

Part of the Hallmark Network’s annual Spring Fever programming event, principal photography of ‘True Love Blooms’ took place in the sunny town of St. Petersburg, Florida. Directed by Matthew Diamond, this tele-film marks Sarah Rue’s second appearance on Hallmark, after ‘All for Love’, and Jordan Bridges’ third after ‘Holiday Engagement’ and ‘Christmas at Holly Lodge’. Michael Watkins who lives next door to where crews were filming, said the presence was a boost for the local community. He adds “We have a great artist community here locally. There’s a lot of people in our area that are energetic when it comes to the arts. So anything we can do to help promote the arts is an awesome thing.” Read on to know more about the film.

The entire shooting schedule of ‘True Love Blooms’ was wrapped up in a mere 15 days. Co-creator and actress Sarah Rue plays the character Vikki, the operator of a local community garden she inherited from her late father, while her eventual love interest Chace Devine, a shrewd, confident real estate developer is being played by actor Jordan Bridges. Except for the two stars, the rest of the characters were cast locally in the filming location of St. Petersburg, Florida. Producer Elayne Schneidermann Schmidt while speaking about their casting policy said, “We usually bring the two stars that have worked on Hallmark before. The rest of our cast– in our case, 21 characters– were cast locally, supporting roles and all. All of our extras are local; most of our crew is local.”

True Love Blooms Plot: What is it about?

The central premise of the telefilm ‘True Love Blooms’ is the love/hate dynamics between its two lead characters played by Sarah Rue and Jordan Bridges. Rue plays the role of Vikki George, the operator of a local community garden started by her late father. With so many childhood memories attached to it, Viki takes great pride in the community space. Thus, when shrewd real estate developer Chace Devine (Bridges) plans to use the garden place for building high-rise condos on the site, Vikki desperately confronts him. As Vikki and Chace start pleading their cases to each other they eventually realize that they are in fact quite similar, leading to a bloom of romance. Rue, who is also one of the co-creators of the ‘True Love Blooms’ while analyzing the film says, “One of the things I liked most about this story is you see these romances and you think, ‘Why aren’t they just together?'”she adds “With us, he’s literally destroying my dream, so there’s real conflict. We walked the line of finding the chemistry and charm between the two of us and clicked right away. He’s (Bridges) the kind of actor I like working with. I referred to him as my set husband…..that’s something you always want.” Both Bridges and Rue have worked in Hallmark productions before ‘True Love Blooms’.

True Love Blooms Release Date: When will it premiere?

The entire development process of ‘True Love Blooms’ was conducted extremely swiftly, with the filming schedule in St. Pete, Florida wrapped up in a mere fortnight. The tele-film is slated for its premiere on the Hallmark channel on Saturday, April 6 as a part of its annual Spring Fever programming event. It promises to be a treat for rom-com lovers and gardening/ botanical enthusiasts.

Enjoy the seamless chemistry between Sarah Rues and Jordan Bridges in this promotional trailer released by Hallmark.