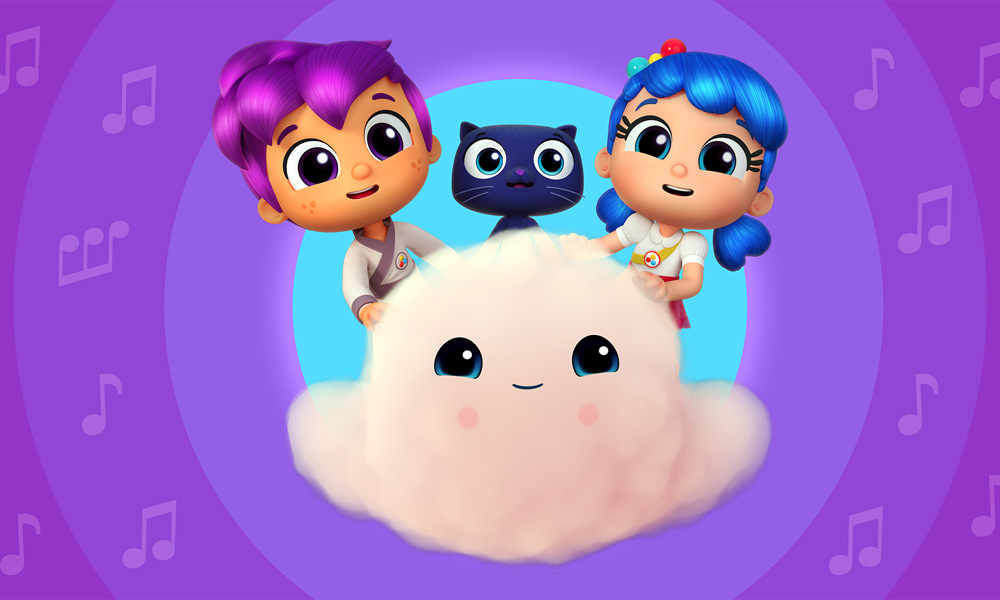 ‘True Tunes’, a spin-off of the popular Netflix Original, animated series for kids, ‘True and the Rainbow Kingdom‘, is about a group of charming, cheerful and color-loving characters, residing in the fictional Rainbow Kingdom. Featuring a collection of eight original tracks, the show brings a fresh twist on classic children’s songs. Some of the showcased tracks here are “The Wheels on the Rainbow Bus” and “Zee Zee My Playmate,” among others. A beautiful, family-friendly series, it is produced for Netflix by Guru Studio, alongside Home Plate Entertainment, FriendsWithYou, and I Am Other. It is based on the artwork by FriendsWithYou.

True Tunes Cast: Who is in it?

The cast of ‘True Tunes’ is led by True, voiced by Michela Luci. She is the strong female protagonist with a warm heart, a sharp mind, and plenty of energy. She never hesitates to face any challenge and has exclusive, extraordinary abilities in the entire Rainbow Kingdom to unleash the special powers and magical energy of the Wishes. Her forever friend and sidekick is Bartleby (voiced by Jamie Watson), a funny yet brave cat, endowed with the gift of gab. Although brave outside, he is the complete scaredy-cat inside. And only True knows about this aspect of her friend. With a lot of opinions and a knack to offer continuous commentary, he helps True use her problem-solving skills.

Rainbow King (voiced by Eric Peterson) rules the Rainbow Kingdom. A lovable, kind, sympathetic, and humble king, he is extremely wise and knowledgeable. He imparts his knowledge via complicated riddles, allowing True to utilize her skills. Although he is willing to help True through all her ordeals, he knows that he must let her solve her own problems. Zee (voiced by Dante Zee) is True’s best buddy, the Rainbow King’s apprentice, and the wish keeper aka “Wishologist”. He knows everything about the Wishes and has deep insights about their strengths and powers. Whenever there is any problem, True always seeks Zee’s advice and guidance.

Grizelda (voiced by Anna Bartlam) is a somewhat selfish young princess. She wants to be True’s friend but her ego makes it difficult for her to open up. Moreover, True’s intentions to reach out to her are often thwarted due to Grizelda’s self-absorbed nature. But this does not stop True from trying. Frookie, the dog, is Grizelda’s sidekick and always looks out for her. He knows that she is, after all, good in her heart. Finally, the Wishes are non-verbal, extremely expressive entities, who communicate via sounds and signs. Each Wish holds its own unique personality that either compliments or contrasts its power. They share a close bond with True and only help when called upon. Otherwise, they remain with Zee for training. Each Wish has a certain power that can only be activated by True.

True Tunes Plot: What is it about?

‘True Tunes’ is another attempt from Netflix to further the ‘True and the Rainbow Kingdom’ franchise, which has seen so much of success since its debut in 2017. After the 2019 premiere of ‘True: Mushroom Town’ and the Valentine’s Day special, ‘True: Happy Hearts Day’, it takes us through more adventures in the whimsical Rainbow Kingdom. This animated series for children revolves around the 8-year-old True and her best buddy Bartleby the Cat, as they try to help the residents of Rainbow Kingdom, a bright, wondrous, and imaginary universe, which is home to multiple fantasy entities. Since only True possesses the ability to activate the Wishes of the Wishing Tree, she has a unique power to solve any type of problem.

Packed with imagination, mindfulness, and empathy, ‘True Tunes’ is a thoughtful and creative show, especially for young kids. The fantasy story arcs help in propelling children’s ability to think, imagine, and create. Even True, with her confident and sympathetic nature, inspires young viewers to adopt and imbue such qualities within themselves.

True Tunes Season 2 Release Date: When will it premiere?

‘True Tunes’ Season 1 premiered on Netflix on July 12, 2019. All the 10 episodes of the series premiered on the streaming platform on the same day. Now as far as a renewal is concerned, here is some good news for fans. Netflix has already announced that it will be releasing new episodes, including seasonal specials and a mix of comedic shorts and songs throughout 2019 and 2020. Hence, there might be variations in names and titles, but the True franchise is sure to go on for a long time in the near future. We shall keep on updating this section as soon as we learn more about ‘True Tunes’ season 2 release date and related news. So, stay tuned!

Below is the official trailer for ‘True Tunes’ Season 1. If you have not watched the show yet, you can head over to Netflix to catch up on all its first season.