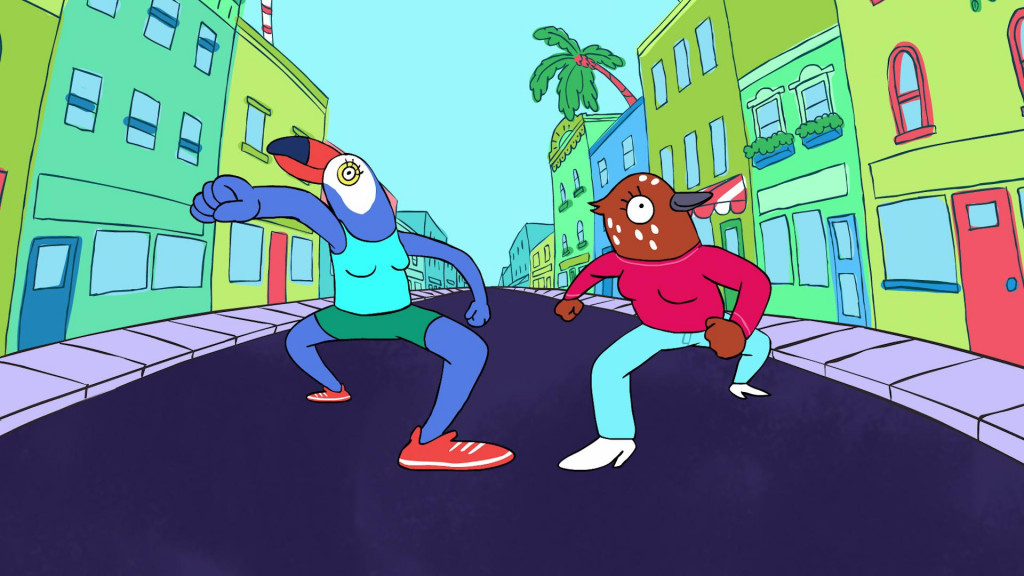 What happens when ‘BoJack Horseman‘ meets ‘Broad City‘? Well, maybe, you get the best cocktail mix in the form of ‘Tuca & Bertie’, an animated sitcom, created by Lisa Hanawalt, who is also the cartoonist and production designer for BoJack. This surreal, colorful Netflix Original features anthropomorphic people, absurd, acid humor, and silly, goofy comedy. It is about two friends, polar opposites of each other, but still, co-dependant buddies. As they together go through their endless misadventures professionally and personally, we can somehow relate to them and see yourself oddly featured in their story. The show explores various controversial, bold topics in its own colorful, bizarre way.

The first season of ‘Tuca & Bertie’ premiered on Netflix on May 3, 2019. It is executive produced by Hanawalt, alongside Raphael Bob-Waksberg, Noel Bright, Steven A. Cohen, Tiffany Haddish, and Ali Wong.

Tiffany Haddish is the voiceover artist for Tuca. She is an actress, singer, model, comedian, and author who is known for her role in ‘If Loving You Is Wrong’, ‘The Carmichael Show’, ‘Keanu’, and ‘Girls Trip’. Bertie is voiced by Ali Wong, a stand-up comedian, and writer, best-known for stand-up comedies like ‘Baby Cobra’ and ‘Hard Knock Wife’. Other featured voice artists include Steven Yeun, Nicole Byer, Richard E. Grant, John Early, Reggie Watts, Tig Notaro, Amber Ruffin, Jermaine Fowler, and Tessa Thompson.

Tuca & Bertie Plot: What is it about?

‘Birds of a feather wing it together’ — ‘Tuca & Bertie’ is about two bird women, the confident, lovable, and messy toucan named Tuca and the sweet, introvert, always anxious songbird named Bertie. The best friends live in the same apartment in the fictional city of Birdtown. Birtie is employed as a publisher for the magazine called Condé Nest and Tuca does freelance gigs for ChoreGoose.

As the episodes unfold, you see ridiculous events that seemingly arrive from nowhere. To give you an example, Bertie’s boyfriend Speckle informs her that his grandmother’s ashes have somehow been baked into a cake and now accompanies her resurrected ghost. In another incident, Tuca brings in a jaguar as her pet, which leaves Bertie perplexed. You also see a subway train that takes the form of a giant caterpillar. Yes, the moments are too random, but this rare sitcom wonderfully depicts a nuanced female friendship. It gradually evolves to give us glimpses of the characters’ backstories and their past traumas. And yes, you do relate to it.

In Tuca, you might see your confidence, which you wear as a mask to hide your insecurities. And in Bertie, you witness a woman who seemingly has it all but cannot decide what she actually wants in her endless journey toward pleasing people. So you obviously connect to the duo as they continually try to self-improve themselves in this complex phase called adulthood. Each of us has both these personas woven into our psyches, and ‘Tuca & Bertie’ does an awesome job in exploring this weird combination. This remarkable story doesn’t present its female protagonists as models of good behavior and morality or followers of modern feminism and contemporary women empowerment. It is simply about two adult women, trying to stick together while navigating life, accompanied by their strong and sometimes frustrating friendship.

Hanawalt expressed her hope with the show on NPR, “I just hope that the people who watch it connect with it, and that it makes them feel better about who they are, so they don’t have to feel apologetic for being a certain way or not being the status quo or whatever.”

Tuca & Bertie Season 2 Release Date: When will it premiere?

‘Tuca & Bertie’ Season 1 released on Netflix on May 3, 2019. All the ten episodes premiered on the same day. of We have already seen that adult animated comedies have become a global phenomenon. ‘BoJack Horseman’, ‘Family Guy’, ‘Archer’, ‘The Simpsons‘, to name a few, are living examples of how well this genre is doing. But, ‘Tuca & Bertie’ comes as a fresh wave in the world of male-dominated animation by introducing an all-new cast of female protagonists. In fact, this approach is the first of its kind in the realm of adult cartoons.

Unfortunately for the fans, on July 24, 2019, Netflix announced the cancellation of the show. “Lisa Hanawalt created a relatable yet whimsical world in Tuca & Bertie,” Netflix said in a statement. “We’re grateful to Lisa, and her fellow executive producers Raphael Bob-Waksberg, Noel Bright, Steven A. Cohen, and EPs/stars Tiffany Haddish and Ali Wong, along with all of the writers and animators for sharing the funny and dynamic female bird duo of Tuca and Bertie with the world. While Tuca & Bertie won’t have a second season, we’re proud to feature this story on Netflix for years to come.”

While we can hope that some other network picks up the show and releases ‘Tuca & Bertie’ Season 2, but practically speaking, that looks highly unlikely.

While we wait for any positive news on season 2, check out the season 1 trailer to refresh your memories. If you haven’t seen the show yet head over to Netflix to catch all the episodes of the first season.