Two Doors Down Season 5: Everything We Know 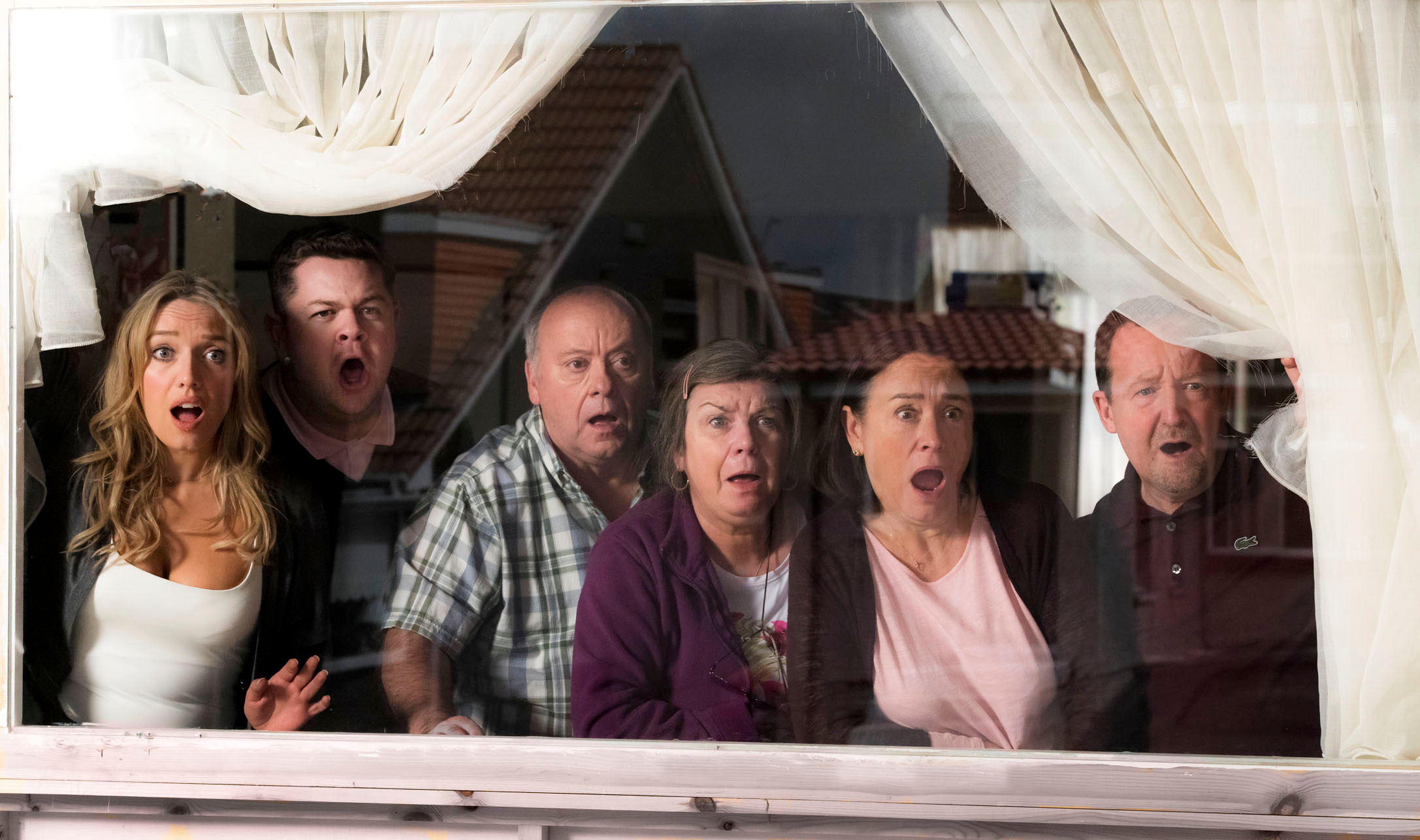 Produced by BBC Studios Comedy production for BBC Two, ‘Two Doors Down” features a couple, Beth and Eric, who are incessantly pestered by their neighbors. The writers, Simon Carlyle and Gregor Sharp have centered the plot around the idea that everyone living on the fictional Scottish suburban street has to get along with each other. Its pilot episode was first aired in 2013 which humorously depicted people who overstayed their welcome, completely forgetting to draw a line between being friendly and cramping someone’s personal space. Beth and Eric try their best to have some peace and alone time in their own house without being disturbed by those next door. But that seems like an implausible expectation to keep.

The audience found the show to be extremely refreshing and received it with immense love worldwide. “Two Doors Down” bagged the popular award “The Best Comedy” at the 2017 Royal Television Society Scotland Awards. After such positive reviews and critical acclaim, its fans have been eagerly waiting for a fresh season. Here’s everything we know about it!

Two Doors Down Season 4 premiered on January 7, 2019, and contained six episodes, each half an hour long. The last episode of this season was released on February 11 of the same year on ‘BBC TWO’.

The good news for the fans is that the next season of the BBC comedy is already in the pipeline and this news has been confirmed by Shane Allen, Controller of BBC Comedy Commissioning. In his words,  “The audience popularity across BBC Two and iPlayer has led to huge affection for a show that now rubs shoulders with The Royle Family and Gavin And Stacey as a firm and long-lasting sitcom favorite. The writing is so precise, the characters burst with comic vitality and the performances are a masterclass in comedy delivery. Poor Eric, what fresh hell is he in for?”

The new episodes of this six-part series will be filmed in Glasgow and Two Doors Down Season 5  is expected to release in 2021.

Two Doors Down Season 5 Cast: Who is in it?

The production team is excited to have the entire main cast back on the set for its fifth season. The viewers are sure to have a laughter riot as they will see their favorite characters perform.

The central characters are the three middle-aged women, namely, Cathy, Christine, and Beth. Cathy, being played by Doon Mackichan, is a big-time party person, always full of enthusiasm and the one giving rather un-welcome opinions. Beth’s simple character is portrayed by Arabella Weir, seen in her “comfy” clothes walking around wearing a kitchen apron. Their third gossip partner Christine, a comical role performed by Elaine O’Neal, frequently recounts her medical history to the point of exhaustion. Also, the fans will again have the pleasure of enjoying the on-screen presence of Jonathan Watson playing Colin, and Alex Norton playing the part of the pitiable Eric.

This multi-award winning show is ready to welcome some new members to its cast. For example, Graeme ‘Grado’ Stevely as Alan and Joy McAvoy as Michelle, furthering their role as the street’s newest residents. Baird’s son being played by James Quinn and Kieran Hodgson’s character as his boyfriend will also be making an appearance with the names Ian and Gordon, respectively.

Two Doors Down Season 5 Plot: What can it be About?

Other than containing bits of adult humor and occasional use of strong language, the sitcom in its storyline is extremely simple and straightforward. Unsurprisingly, the characters deal with mundane but believable situations that ultimately keeps bringing the neighbors to each other’s houses. The plot so far has focused on a neighbor knocking at another’s door to borrow something or showing up at their houses to give a vent to their emotions about a situation they are dealing with in their personal life.

Arabella Weir, in an interview with Lorraine, says that she actually believes the fact that sometimes neighbors can become “really good friends.” Steven Canny, the executive producer with BBC Studios Comedy, said: “We’ve been cruelly torturing poor Beth and Eric for the last 7 years and couldn’t be more delighted about having another go. ‘Two Doors Down’ is a brilliant show to make, a genuine delight from start to finish, and I can’t wait for the audience to see what we have lined up for Series 5. Some overbearing neighbors may be involved.”

As can be expected, stuck between the three houses, Eric and Beth will continue to struggle in order to hold things together. The sweet and sensible Beth’s utmost patience and effort to not upset the delicate peace and her methods to cope with these “overbearing” neighbors are guaranteed to tickle the funny bone of the viewers.