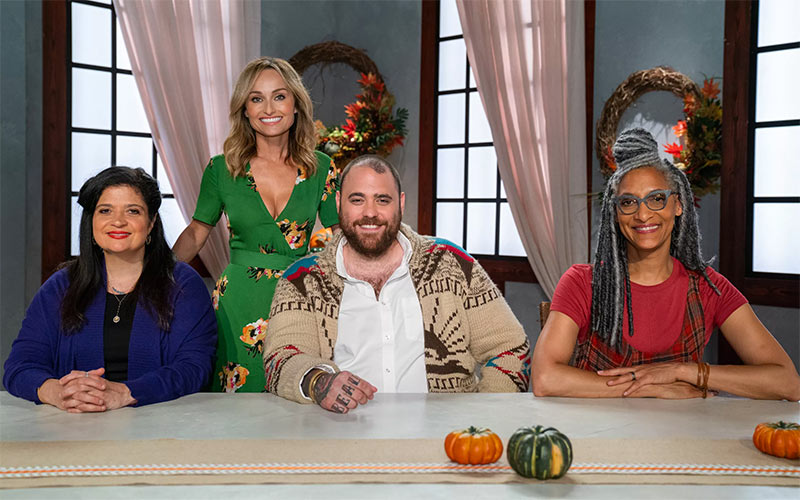 Ultimate Thanksgiving Challenge is a TV series that is about, as the name suggests, preparing Thanksgiving dishes. The show debuted on 3rd November 2018 on Food Network. The series features five talented chefs who have to make their best Thanksgiving dishes to win the title and a sum of $ 25,000.

Each episode in this series is divided into two challenges where the first challenge features classic side dishes and the second challenge features the Thanksgiving meal. The chef who wins the first round gets an advantage in the second challenge. From making stuffings to sweet potato casserole, the chefs will do their best to compete with other participants. The chefs have to add a punch of flavour and make it more creative, but they have to see to it that the original dish doesn’t lose its taste.

Who’s the Host of Ultimate Thanksgiving Challenge? Who Are the Judges?

Darnell emerged as the winner of season 1 who won a grand prize of $25,000. “As much as I enjoyed Ultimate Thanksgiving Challenge, and wish it wasn’t over already, three episodes was made for a nice, compact season: it’s easy to get to know all the contestants and appreciate their work and the show itself.” he said. “I’m grateful for this Thanksgiving surprise, and hope it returns next year—and hope Giada, Alex, and Carla are together again soon, as they made for a terrific team.”

What is Ultimate Thanksgiving Challenge About?

With Ultimate Thanksgiving Challenge, Food Network has brought about one of the most memorable feast celebrations for its viewers. In the series, talented chefs are put through various challenges to win a prize money of $25,000. The chefs take the sweet pies and the Thanksgiving classic dishes to new heights.

In the first season, chefs had to do their best in the first round of Thanksgiving Challenge. They were pushed to their limits and had to make a classic dinner to pass this round. They were instructed to reinvent an entire turkey dinner which had to include an ingredient from the very first Thanksgiving. They had to complete this challenge within an hour. Even as they hurried, they found themselves racing against time.

One chef gets eliminated in the first episode. In the second episode, the four remaining chefs head to the next round for a chance to win $25,000. They have to compete against each other in the second round. The winner of the first round gets an advantage in the next round where the other chefs take on everyone’s leftovers.

In the final episode, the remaining three chefs move to the finale where they have to make their best feast which should be memorable for everyone present. The chefs have to showcase their creative sides to win the first round of this competition. The competition becomes very difficult for the participants because the kitchen equipment is out of their league. One more chef gets eliminated at the end. In the last round, only two chefs are left to battle against each other. They have three hours in their hands to make a full delicious Thanksgiving meal. The winner of this competition walks out with $25,000. Darnell Ferguson, who ultimately won the round, posted on his Instagram account “I am so thankful. I went against the most talented chefs tonight and was able to come out with the win.”

Ultimate Thanksgiving Challenge Season 2 Release Date: When will it premiere?

Ultimate Thanksgiving Challenge season 2 is all set to release on November 3, 2019 on Food Network.

The series has received a great response from its fans. It seems like all food lovers are impressed by the first season of the show and would be expecting more of the same in the second season as well.

There’s no trailer available for the show, but you can head to its official website to catch up on latest clips from the show.