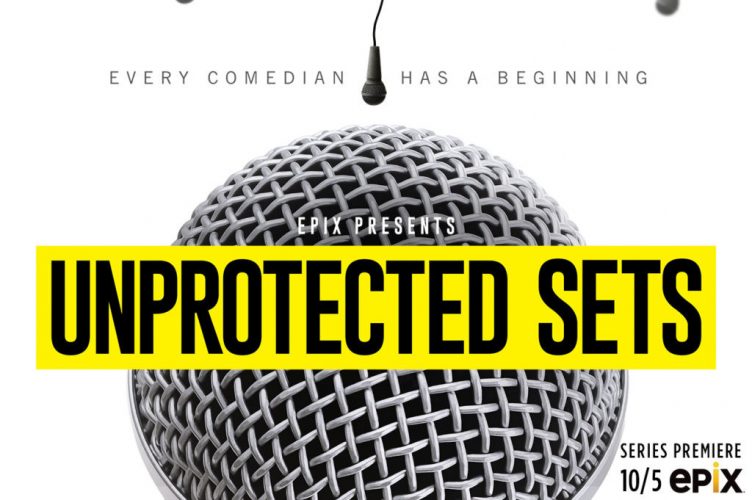 The saying goes – Life is a tragedy when seen in a close-up, and a comedy when seen in a long shot. Unprotected Sets, documentary television series produced by MGM Televisions and Push It Productions, brought in 12 such emerging stand-up comedians from different segments of life. And the result was mind-blowing.

This is an American series directed by Ramy Romany. The series features these upcoming stand-up comedians in each of its episode from different parts of the United States of America to showcase their skills through uncensored and hilarious performances in from the camera. As per Wikipedia, “Shooting in Portland, San Diego, D.C., Minneapolis and Atlanta, each episode presents a compelling portrait of a comedian on the verge of breaking out to become the next big name in comedy. The diverse lineup of breakout talent offers insights into the motivations behind baring one’s soul for a living. Their dynamic, personal, and hilarious performances – where nothing is off limits – will show us exactly how, in their own inimitable way, each comedian turns life into art.” Not only the performers gained a platform with a wide audience reach through the national television channel, but it also proved to be a great experience for the audiences to catch the performances in different cities.

The show first premiered on EPIX channel on October 5th 2018 and ran till December 21st, 2018. While the show has not received a renewal yet from the channel, but looking at its huge popularity, this looks like a matter of time.

As per Deadline, Wanda Sykes, who is one of the executive producers, says, “We’re excited that we get another opportunity to give up-and-coming comics a chance to shine.”

Unprotected Sets Season 2 Plot: What is it about?

In season 1, 12 emerging comedians with diverse backgrounds across the country come together to showcase their talents. Like each one of us has a different story to tell, similar was the case with these comedians. Each one had a unique story hidden behind their comedy acts. Whether it was Zainab Johnson coming from an African-American Muslim background with her crisp storytelling techniques, or Raul Sanchez who was born in Mexico and served in the frontline for the US Army in Afghanistan and Iraq with his talent of bringing out the comedy from the grindings of daily life, the audiences were able to relate to these performers.

Similarly, for Rob Christensen, it was comedy that changed the course of his life which was marred by his involvement in selling drugs. On the other hand, Becky Braunstein, an Alaskan Jew, has hilarious anecdotes about the surroundings and atmosphere she grew up in.

Mohanad Elshieky, an immigrant from war-torn Libya, has acute observations of the American lifestyle. Comedy probably can’t be more intense for him, as he performs for survival, as compared to others who perform for the love of it like Paris Sashay, who has always been an entertainer right from childhood.

The episodes of Unprotected Sets have not only been entertaining for the viewers but also have made them realise that comedy can be healing too. For the one who is watching of course, but also for the one who is performing. Whether it was Shane Mauss who fought with depression or Jessa Reed, who battled drug addiction as a result of a turbulent childhood, or Daniel Webb, who was fighting against homophobia, each has sought liberation from their despairing issues through comedy.

The season also saw some of the more relatable performers like Mia Jackson, Rocky Dale Davis and Scout Durhood whose shows were hugely successful.

Unprotected Sets Season 2 Release Date: When will it premiere?

While Unprotected Sets seasons 1 garnered huge viewership for EPIX, the channel is yet to confirm its renewal. However, based on the audience reviews and the channel spokesperson, the second season of the show should be coming anytime during the second half of 2019. As per Deadline, EPIX president Michael Wright said, “Unprotected Sets is another strong addition to our unscripted lineup, presenting stand-up through a personal, unfiltered lens. We can’t wait to work with Wanda, Page and their very talented teams to tell the stories of some of the best comedians working today.”

Another season will bring about more fun and frolic from the talented team of comedians who with their quirks and witty acts will have the audience doubling down with laughter. We will be waiting for the show to be renewed with bated breaths as will its fans. Keep an eye out on this page for the latest news.

Unprotected Sets’ seasons two trailer is yet to be out for you to watch more from your favourite series. Till then, you can watch the trailer for the first season on EPIX here while you wait for more information on the show. And trust me, the acts in each and every episode will have you in splits. So here you go! On the roller coaster of laughter!