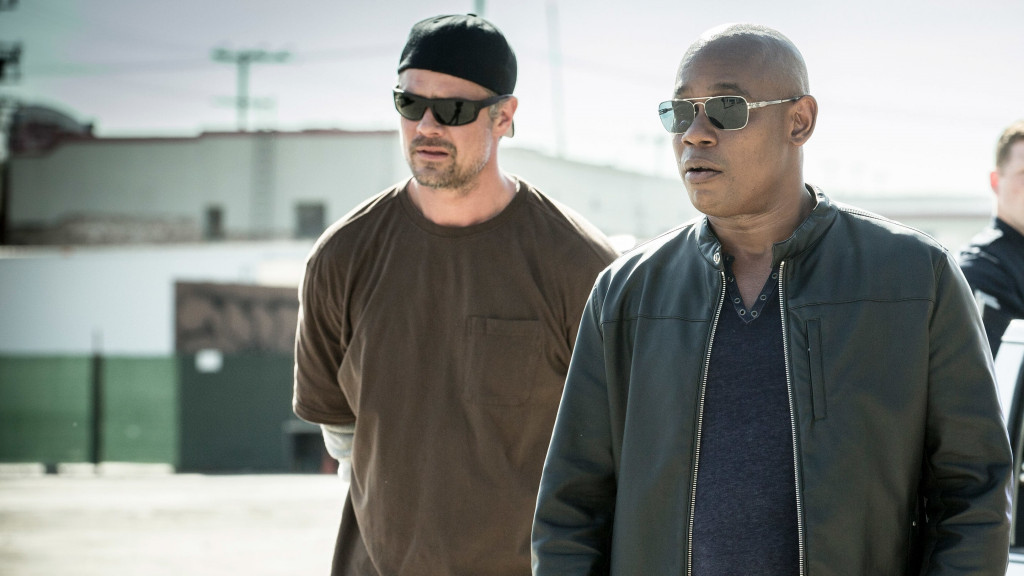 The rap industry was in shock when its two most legendary artists Tupac Shakur and The Notorious B.I.G. were murdered. This led to a hugely controversial case, which has been represented in the new real-time crime drama series ‘Unsolved’. This crime anthology which is based on Greg Kading’s novel named `Murder Rap: The Untold Story of the Biggie Smalls & Tupac Shakur Murder Investigations’ aims to critically show the experiences of the two detectives who solved the case. The series is created and conceptualized by Kyle Long. It showcases the untold stories and unheard tales that were connected with the murder.

The show airs on the USA Network and first premiered on February 27, 2018. It has been received positively by the audience for its excellent narrative and acting by the cast. People are of the opinion that the show is worth watching even if you know everything about the case as it brings about a brand new way of telling the narrative. Biggie Smalls or The Notorious B.I.G. and Tupac have had a well-documented feud which falls within the larger scope of the East Coast and West Coast hip hop rivalry. Some of the greatest diss tracks and hip hop songs have come out as a result of these artists trying to one-up each other.

However, it would be naive not to associate the gangster culture of the hoods with these artists and a lot of them boasted about carrying guns and not being afraid to use them. Notably Biggie, in one of his songs ‘Party & Bullshit’, goes on to say “And can I bring my gat? If not, I hope I don’t get shot”. This is just one of the many songs where the rappers have boasted about carrying guns, and the public feud between two of the biggest names in rap at that time caused everyone to take sides. While we did get some fantastic music, it is regrettable the way these giants in their field were killed.

Those interested in old school gangster hip hop will naturally be drawn to the show and critics have praised it as well, saying, “Unsolved’s prestige aspirations don’t always work in its procedural structure, but strong performances and an ambitious spirit to find truth in this real-world mystery create an engaging exploration of two of pop culture’s most notorious influences”.

Unsolved Cast: Who is in it?

For those who have watched ‘Straight Outta Compton‘, you are aware of Marc Rose’s role as Tupac Shakur in the movie, due to their close similarities in looks. In ‘Unsolved’, Tupac is once again played by Rose for the same reason. As for Biggie, Wavyy Jonez, a newcomer has been selected to play the part. The detective Greg Kading, one of the protagonists of the show has been played by Josh Duhamel who is known for his role in ‘Transformers‘.

The second protagonist of the series,  Russell Poole is being portrayed by Jimmi Simpson who is famous for his role in ‘Black Mirror‘, ‘House of Cards‘ and ‘Westworld‘, Donald Faison stars as Jacques Agnant and Luke James stars as Sean “Puffy” Combs amongst others. There are several other characters who appear and help portray an accurate picture of the feud at that time and the fallout which came as a result.

If there is an upcoming season, the show is unlikely to focus on the same case again, so we will most likely see an entirely new cast and a new case.

Unsolved Plot: What is it about?

‘Unsolved: The Murders of Tupac and the Notorious B.I.G.’ is a crime drama limited series that focuses on the experiences of the two detectives, Greg Kading, and Russell Poole, from the Los Angeles Police Department, who were in charge of the investigations separately on the murders of the rap industry’s most legendary artists, Tupac Shakur and The Notorious B.I.G.. Besides showing the true nature of the investigation, it also has the stories about Tupac and Biggie’s relationship and dwells into why they were murdered and by whom. Kyle said in an interview that he wanted the audience to draw their conclusion based on the facts and proofs collected by the two detectives rather than giving their own ending. The show covers almost all aspects of the investigations that took place in 1996-1997. Since there have been so many documentaries and movies on the case already, the show is a refreshing change as it showcases a brand new way of telling the same story.

For those unaware of the feud, Tupac was shot in front of Biggie’s studio and soon after Biggie released a song titled ‘Who Shot Ya?’. Shakur interpreted it as a direct slight and although Biggie maintained the song was not about him, Tupac went on to threaten Biggie several times after this, including coming up with one of the greatest diss tracks of all time, titled ‘Hit ‘Em Up’ where he not only takes down Biggie but his entire group called Junior Mafia. As the feud escalated, the two giants from the east and west coast, who used to be friends, found the anonymity increasing, and it continued long after they were both killed.

Variety sums up the show well, saying, “As a show, “Unsolved” is best described as the serialized depiction of one of those corkboards covered in yarn, photos, and clues scribbled on index cards that you often see in conspiracy-driven TV shows and films. There’s a lot going on in this narrative — much of it densely complex, and the action spans more than two decades — but its verve, sense of place and a few truly excellent performances were enough to buoy me through the slower and knottier patches.”

If there is an upcoming season, we hope that the show keeps the methodology the same, since it is the detailed process that has drawn audiences to it just as much as the popularity of the feud has. As far as ideas for other unsolved cases go, one that springs to mind is the murder of JonBenet Ramsey, the child star. Netflix already has a documentary on it called ‘Casting JonBenet‘, but I would really love to see this show take a crack at the case.

Unsolved Season 2 Release Date: When will it premiere?

‘Unsolved: The Murders of Tupac and the Notorious B.I.G.’ Season 1 premiered on the 27th February 2018. Being highly anticipated for its controversial storyline that had shaken the nation back in the 1900s, the show received a pretty good response and was considered a success with a higher viewing than expected.

While there has been no confirmation as such regarding the next season of the series, Chris McCumber, associated with the programming of the USA Network, had seemed optimistic about its return. He said in an interview that based on the success, they could branch into other stories and seasons. There are plenty of high-profile cold cases that ‘Unsolved’ could take on and if the show returns, that is what we can expect from it. Our best guess is that if the show does get renewed, Unsolved season 2 can release sometime in 2020. We will update this section as soon as we hear more.

Unsolved: The Murders of Tupac and the Notorious B.I.G. Trailer:

‘Unsolved: The Murders of Tupac and the Notorious B.I.G.’ Season 2 does not have a trailer since the show has not been renewed yet. However, you can check out the trailer for Season 1 below. If you have not seen the series, definitely give it a watch. Even if you do not know about Tupac and Biggie’s feud, the way they approach the murder investigation is fascinating in itself and merits a watch.