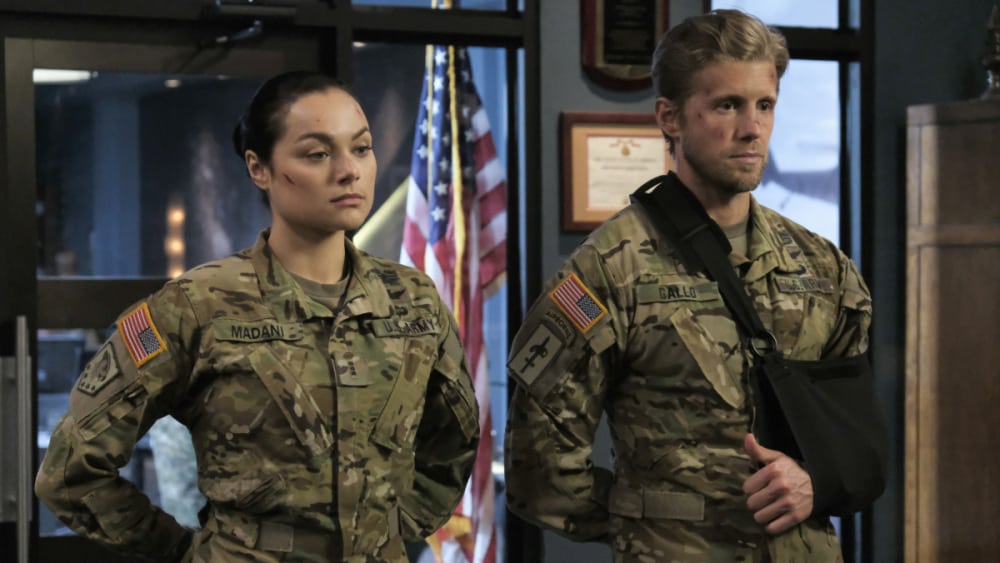 ‘Valor’ is an American military based drama series created by Kyle Jarrow. The show airs on The CW and first premiered on October 9, 2017. The show explores how the boundaries of human desire and military discipline are tested and often get blurred, as the personal lives begin to mix with the professional duties.

Despite show’s interesting subject matter, critics have been reserved in their praise mostly due to its execution, and have said, “Valor’s attempt to highlight an often overlooked segment of the armed services is undercut by a badly judged blend of military action and melodrama”.

Valor Cast: Who is in it?

The cast of Valor is led by Christina Ochoa as Nora Madani, who is a Chief Warrant Officer, the first female to participate in special operation and co-pilot of Gallo.

Matt Barr is seen as Captain Leland Gallo, who is a Pilot-in-Command for the “Shadow Raiders”, a fictional 186 Special Operations regiment of aviation. Both Nora and Gallo are fired during the course of the season and almost immediately get recruited by the CIA.

Charlie Barnett appears as Ian Porter, who is a First Lieutenant, an intelligence officer attached to 186 Special Operations Aviation Regiment and the boyfriend of Madani.

W. Trè Davis is seen as Jimmy Kam, who is a Staff Sergeant Madani and Captain Gallo’s crew chief. Although taken prisoner at one point, he later returns but seems to suffer from post-traumatic stress disorder.

Corbin Reid is seen in the role of Jess Kam, wife of Jimmy Kam and a close friend of Nora Madani. Nigel Thatch appears as Colonel Robert Haskins, serving as the (CO) Commanding Officer of the 186 Special Operations Aviation Regiment and a 23-year old veteran of the US Army.

Melissa Roxburgh plays Thea, who is a member of the CIA-Central Intelligence Agency. In her personal life, she had a short-term relationship with Capt Gallo. She is the one who recruits both Madani and Gallo to work for the agency.

The guest cast of the show includes Valarie Pettiford as Simone Porter (Congresswoman) who is the Chairwoman of the US House Permanent Select Committee on Intelligence, Bryan Craig as Adam Coogan who is a Staff Sergeant, a Delta Force operator, and a Capt. Gallo’s rival. Mac Brandt plays a member of Delta Force named Sergeant Shane Dylan Hendrix. Chelle Ramos plays Zoe Cho, a Staff Sergeant and one of the first females to serve in the Special Operations.

Valor Plot: What it is about?

The plot of ‘Valor’ can be best summed up as a military conspiracy thriller that is driven by prominent female characters. When we are introduced to the show, the Shadow Raiders, an elite helicopter team in the US Army, is seen transporting troops to pick up some target in what appears to be a clandestine mission in Somalia. The show wastes no time in building up the intensity and throwing viewers right in the middle of the action. This is where the mission goes completely wrong, and Madani and Gallo are the only two who make it back alive. While several Americans are dead and their colleague Kam appears to be missing, the CIA gets involved due to the sensitive nature of the mission. As the agency pokes around, viewers become acutely aware that both the survivors are hiding facts about the mission, including its nature, the identity of the target, and what really went down on the ground level.

As the season unfurls, this mystery lies at the very core of the show. However, along with this mystery, there are plenty of elements suitable for a soapy show, like who is sleeping with whom, and who is the boss of whom. Ochoa, who was fantastic in ‘Blood Drive‘ appears spiffy, but cannot quite bring the same intensity in this performance. That said, ‘Valor’ could have gone  ‘The Brave‘ or ‘SEAL Team‘ route instead of turning into a melodrama.

In portraying their characters as mostly one dimensional, the show does some disservice to the cast, who are more than competent to have executed some complex roles. However, this characterization makes them less interesting, and perhaps this is why the show lost out on a ton of viewership as well since people simply did not want to come back and check in to see how this team’s mission was going.

Valor Season 2 Release Date: When will it premiere?

‘Valor’ Season 1 premiered on October 9, 2017. As far as the next season goes, we have bad news for the fans. Soon after its premiere, in November 2017, The CW announced that no more episodes of the series would be ordered as the show did not do well on the rating scale and on May 8, 2018, the network decided to cancel the series. Though, fans should not lose all their hopes. There’s still a possibility that some other network picks up the show. If that happens, we will update you about’ Valor’ Season 2 release date.

While we wait for any positive news on ‘Valor’ Season 2, check out the ‘Valor’ Season 1 trailer to refresh your memories. If you haven’t seen the show yet, head over to The CW to catch all the episodes of the previous seasons.