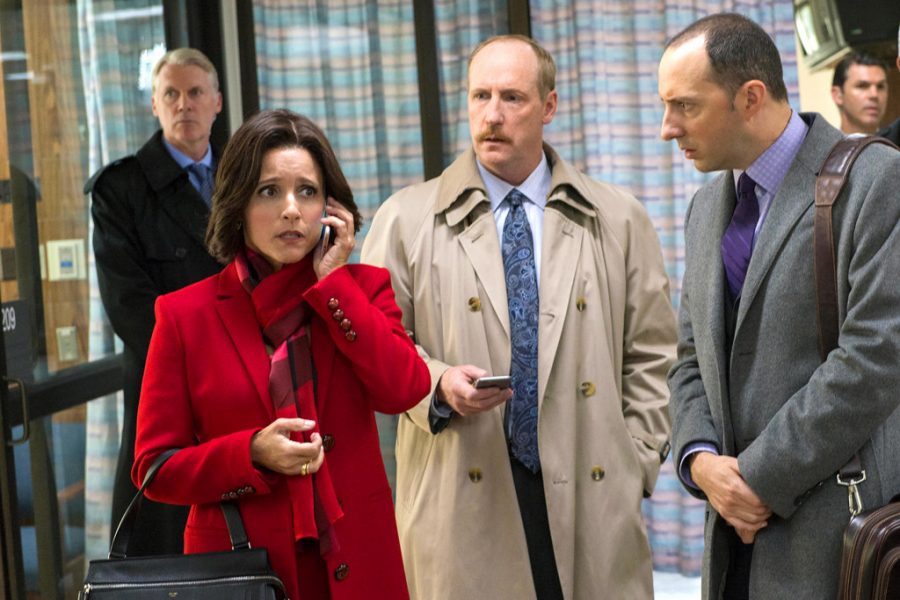 ‘Veep’ is an American political satire comedy television series that airs on HBO, and first premiered on April 22nd, 2012. The show is created by Armando Iannucci, a Scottish writer, and is an adaptation of his British sitcom titled ‘The Thick of It’. With  HBO Entertainment and Dundee Productions backing the project, it has Armando Iannucci himself as an executive producer along with Christopher Godsick, Frank Rich, Chris Addison, Simon Blackwell, Tony Roche, Julia Louis-Dreyfus, Stephanie Laing, and David Mandel serving as executive producers.

‘Veep’ became America’s most popular television comedy due to its relevance to the American political context in recent history. It is a political satire that mocks the fallacy and hypocrisy of the American political scene. The series stars Julia Louis-Dreyfus as the central character in the role of Selena Meyer – a senator becoming the vice president of America with a high chance of becoming president. But the fun and irony of the show lie in her inefficiency in tackling the business. The very recent political upheaval in America has infused a greater interest among viewers regarding the coming season. The series has garnered an extremely strong fan base and has been lauded by critics, even going on to win 17 Emmy Awards, two Critics’ Choice Television Awards, a Peabody Award, four Screen Actors Guild Awards, three Writers Guild of America Awards, two Television Critics Association Awards, and three Directors Guild of America Awards.

However, before ‘Veep’ made waves on American television, it had a rough journey breaking into the industry. ABC initially decided to capitalize on the popularity of Iannucci’s show, ‘The Thick of It’ which had won several awards in the British entertainment industry. However, ABC’s version, which was written by Richard Day and Michael Hurwitz, centered around a low-level Congressman and his staff. The show was ultimately not picked up by ABC and Iannucci himself distanced himself from the project, where he had received production credit earlier, saying, “It was terrible…they took the idea and chucked out all the style. It was all conventionally shot and there was no improvisation or swearing. It didn’t get picked up, thank God”.

Soon after, several networks like HBO, NBC and Showtime expressed interest in picking up the show’s idea. This time around Iannucci was more actively involved and he entered negotiations with the network of his preference, vis a vis, HBO, and the rest, as they say, was written in the stars.

‘Veep’ has had seven successful seasons till date. Here’s everything we know about its upcoming season.

Veep Cast: Who is in it?

Hopefully, in the upcoming season, the main cast will be bolstered by the presence of new and interesting supporting characters who will make the political satire of the show sharper than ever.

Veep Plot: What is it about?

‘Veep’ follows the political ascension and career of Selina Meyer, who begins as the Senator from Maryland. Although her party affiliation is unknown, it is hinted that it is Democratic. Meyers becomes the Vice President of the US only to find out that the job is nothing like what she dreamed of and everything like what everyone else warned her about. The title of the show is a reference to Meyer’s post, as ‘Veep’ comes from the abbreviation of her post as Vice President, vis a vis, VP. When Meyers first enters office as the Vice President, having failed to become the frontrunner in her party, she finds that the president does not hand over many duties to her and she has little to do. However, as the show progresses, we see her completely dependent on her advisory team and beginning to gain a position of power and influence within the White House. Eventually, she considers running for President herself and successfully lands in the Oval Office in what is possibly the most powerful position in the world.

What stands out about the show is the political satire and the fact that it does not shy away from attacking the idiosyncrasies of American politics. It is not too soft on the language either and the halls of the White House includes plenty of swearing. Moreover, ever since Donald Trump got elected as the President of the United States, ‘Veep’ has not held back in its scathing jokes and critiques, and to be honest, there has been plenty of fodder for that in the American political landscape in recent times.

In the upcoming season, we hope the show continues in a similar fashion with the unabashed and unrestrained humor that it pokes not only at the American political system but also the close look it takes at the actual issues affecting the country and how they are dealt with at the very highest echelons of administrative power.

Veep Season 8 Release Date: When will it premiere?

Season 7 of ‘Veep’ premiered on March 31, 2019. While ‘Veep’ has not announced a release date for the upcoming season yet, fans should know, in the interest of full disclosure, that HBO and Iannucci had announced prior to the airing of Season 7, that it would be the final season of the show. However, there is always a chance that another network could pick it up, considering the many awards it has won and many fans it has accrued. Therefore, we should not really give up hope for Season 8 yet, but there we are sure we will not be seeing the next season of ‘Veep’ anytime soon. Our best guess is that in an unlikely scenario of its renewal, Veep season 8 can release sometime in 2021. before sometime later in 2020 or towards the beginning of 2021

Check out the trailer for Season 7 of the show here to get a better idea of what ‘Veep’ is about. You can also check out its official website here to know more details.