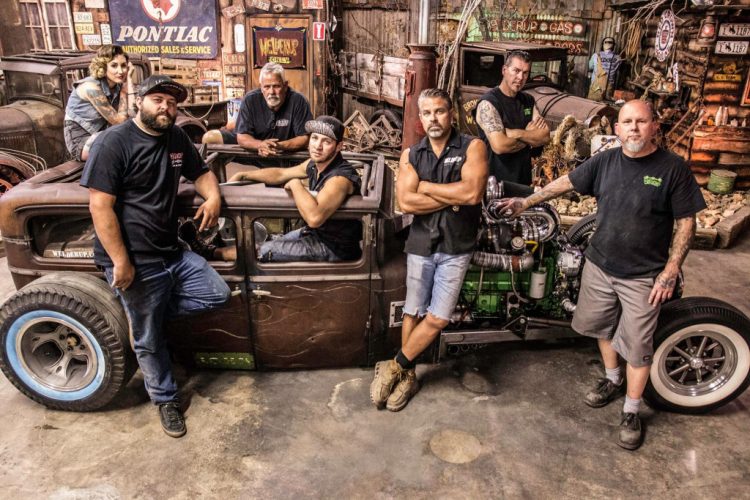 Vegas Rat Rods is a show about a group of misfits who work together to create spectacular, one of a kind Mad Max fury road style automobiles in their sprawling garage in Las Vegas. It is a reality television series that premiered for the first time on April 17, 2014, on the Discovery Channel. The show basically focuses on recreating, customizing and rebuilding vehicles that would be otherwise considered as a lost cause.

The primary members of the show are as follows. These seven members make up the Welder Up crew.

Dan-he is Steve’s mentor and the one you can always count on to get the work done in time. Dan’s job is also to see that the clients are only promised what is possible for them to deliver. Sometimes Steve and the crew tend to get carried away in regards to what they can offer, and Dan is there to remind them of the law of physics.

Justin- is the youngest member of the crew but still just as good as the rest as he is a third generation welder. Being a third generation welder means he has got a lot of experience with the craft and has grown up with it starting at the age of just 13. All the experience also rings in a lot of expectations for Justin. He can weld any type of metal and design and build the suspension and chassis for any type of vehicle on the planet. He is precise and quick in his work.

Travis is the artistic one in the bunch, he has managed to combine fabrication, welding, and art and helps Steve give life t the creative aspects of the vehicles. He is responsible for making them aesthetically pleasing and fabricates and assembles the parts.

Dave is the silly one in this bunch and the one who has to constantly prove himself as he does the least amount of work. He does all the upholstery and is kind of the odd man out amongst the rest of the gang.

Twiggy had applied for an internship under Steve with no idea what she was getting into, but as soon as she stepped in, she was hooked by the work and was ready to get it done.

Merlon has more than 40 years of experience in a turbo diesel. He has a lot of passion for extreme rides. Chase and Kash Darnell, at Welder Up, are the future fabricators of the crew and work alongside the rest of the crew so they can learn from them. The big boos Steve- is the creative genius who bought together the entire welder up crew. He is extremely competitive and very passionate about building the rat rods.

Vegas Rat Rods Plot: What is it about?

The show follows the every-day work life of the Welder Up crew and how they manage to turn beaten up pieces of junks into state of the art vehicles that can run at dizzying speeds. The members of the crew are very experienced and extremely passionate about these projects which is why they manage to do the impossible in every episode and surprise their viewers. Not all the vehicles that come into the shop are just pieces of metals, there are some that just need a little bit of sprucing up, or the owner wants to customize it according to his or her taste, and they do an amazing job with it every single time.

When asked Steve about how or from where his love of cars developed in an interview, he talked about the toy cars he owned in childhood, ”They were just random models. I mean none of them matched. I’d sit in my bedroom grounded and build these models that were just crazy. They didn’t make any sense, and they were really cool. Anyway, I think that’s kind of where it [love for cars] started, and then as I got older, I went through a phase where I went rodeo-ing for a while, and actually team-roped, and did a lot of cowboy stuff for a while and used to gather wild cows out of the desert with JR, my friend that you’ve seen on TV last year. But I kind of did that for a while, and, you know, after that I always had cars.” The turning point for Darnell was when he managed to put a diesel engine in a sedan after which he never looked back.

Vegas Rat Rods Season 5 Release Date: When will it premiere?

Season 4 of the show premiered on October 1, 2018. The show over the years has garnered a very loyal fan following and therefore, it is highly likely that the show will return with a lot more cool rat rods and crazy ideas and some drama from the Welder Up crew. If the show does get renewed, it is expected to premiere sometime in July 2020.

There are no trailers or teasers released yet for the fifth season as the series is yet to be renewed but below you can get a glimpse of some of the beautiful monstrosities that the crew has built so far.