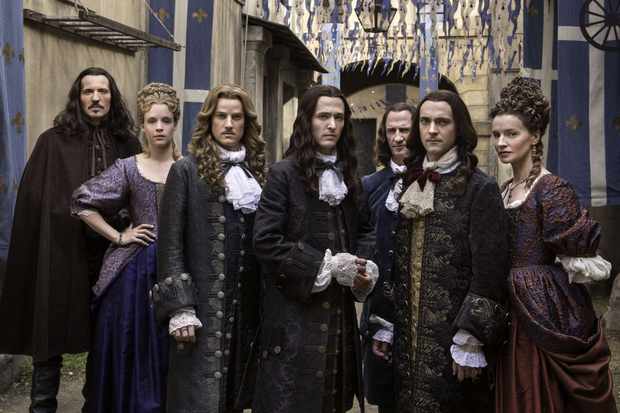 The story is set in 1667. Louis XIV, a powerful king of France, plans to create the greatest palace on earth. As he starts planning to build the palace, political intrigues, affairs as well as drained budget put him in a difficult situation. What follows is a 28-year-old king who has set his mind on his goal and is ready to emerge victorious come what may.

Versailles Plot: What’s it about?

Versailles is a Canadian historical fiction television series which centres around the reign of a 28 years old Louis XIV who is determined to build a huge palace in Versailles. He wants to build the most beautiful palace in the world. In 1667, after building a lavish palace, many noble families visit this residence to have a look at the masterpiece. One thing these nobles are unaware of is that the King wants to imprison them and control them. Louis XIV’s main target is his younger brother, Monsieur. The series also showcases a romance between the King and his queen Marie Theresa. Throughout the series, the queen tries to win back his man’s heart from his numerous mistresses. This series showcases, love, betrayal, power, and war in the Versailles series. The audience can get a peek into the daily lives of these noble families through this series.

Versailles Cast: Who’s in it?

Louis XIV- Louis XIV is played by George Blagden. He was known as Louis the God Given.

Born in 1638 in Saint-Germain-en-Laye, after his father, King Louis XIII perished; he completed his education with the help of his godfather Cardinal Mazarin and his mother Anne of Austria. In 1660, he married his cousin Maria Theresa from Spain at Saint-Jean-de-Luz. Their marriage reunited Spain and France. Louis XIV had six children with her, but only the son named Le Grand Dauphin survived until his adulthood. When the queen died in 1683, he secretly married Madame de Maintenon. Louis XIV had many mistresses including Madame de Montespan and Mademoiselle de La Vallière. He had several kids with all of his mistresses.

Marie was the Queen Consort of France. She was extremely sweet by nature, patient, timid, naive as well as pious. She always tried to maintain distance from the social chaos of the court. She was not fluent in French. In the palace, she was surrounded 24/7 by Spanish ladies. In 1666, her life shattered when her godmother, as well as her aunt Anne of Austria, passed away. Later on, she was really hurt and cheated by her husband’s extramarital affairs. She never had any aims get influenced in politics, but she went along with the king to several meetings during the Franco-Dutch War. After returning from a tour of Burgundy and Alsace, she felt sick and died in Versailles. King was unbothered with her death and decided to remarry someone else.

In 1647, she became an orphan after her father was imprisoned for debt. In 1670, she came into King’s attention with the help of Madame de Montespan. In 1683, she secretly got married to Louis XIV and removed Madame de Montespan from her post. The king loved to visit her after meetings with ministers. After the Louis XIV died in 1715, she founded girls school Saint-Cyr.

Madame de Montespan- She was successful in making her way to the court with the help of Anne of Austria. In 1667, she became the official mistress of Louis XIV. Her family ‘Montemart’ is known for their wit, and everybody feared her in the court. People were also in awe with her beauty. She became king’s favourite mistress and got her own apartment near Louis’s. In 1680, she was replaced by Maintenon. Later on, she was held responsible for the death of the Queen. The king removed her from her personal chambers and from the court as well. She finally decided to leave Versailles in 1961.

Unfortunately, Versailles season 3 was the last season which ended on 6th August in 2018 on BBC Two. Before the release of the third season, it was already confirmed that it would be the last. The series was supposed to complete four seasons, but due to some issues, the third season was the final season.

Platt explained: “I think people were very sad, but also you could see everybody was very proud of the work and the actors who had been in it for three years, they were all saying they are going to miss it hugely but at the same time, they think the producers are right, actually the story of King Louis after this point is kind of less interesting.”