Vikings S06 E10: Everything We Know 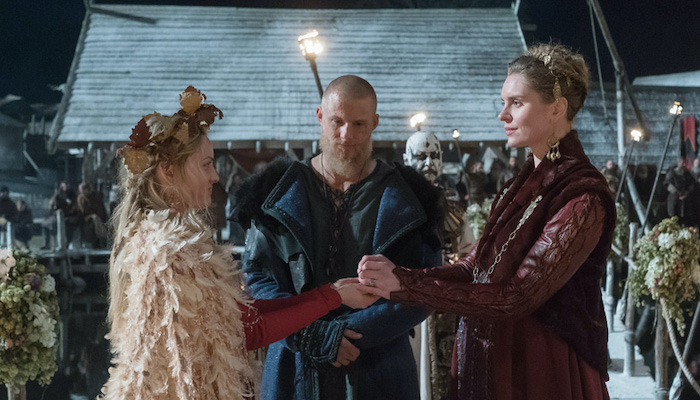 ‘Vikings‘ remains a fan favorite show, which is currently on Season 6. What started off as the documentation of Norse hero, Ragnar Lothbrok’s, rise to power, has become a chronicling of his sons’ legacies. As we head towards the mid-season finale, the pace is increasing.

We have already witnessed the steps Bjorn takes after his mother’s death, and now Oleg’s armies are at the gate as well. Naturally, you might be curious to know about what goes down in the current episode. We are here to tell you that right after we walk you through when and where to watch the upcoming episode.

Episode 9, titled ‘Ressurection’, sees Bjorn take Ingrid as his second wife. Gunnhild solves the problem of his faithlessness, for now, but Bjorn realizes he has hurt her. She insists that Bjorn spend his wedding night with Ingrid, but despite the tough act, Gunnhild is not comfortable with the arrangement, as her attitude towards Ingrid indicates.

While his personal life is a little messy, Bjorn sends out Erik, with a small group, to man the borders. They come across one of Oleg’s smaller parties, and a battle ensues. Neither is victorious and they both retreat. In a coincidental turn of events, we see Ivar leading one of the raiding parties when he comes across Hvitserk, who is lost.

While taking Hvitserk back on the boat, to Kiev, the latter comments that Ivar always haunts him. In a show of tenderness, Ivar admits to being glad to see Hvitserk. Back in Kiev, when Hvitserk tells Ivar about killing Lagertha, he is started but does not react. The newcomer is introduced to Oleg and Katya as well. We also get the opportunity to see Oleg’s military prowess, as they stand in formation.

Meanwhile, Bjorn sends Erik to Harald’s court, with an offer of an alliance. It seems that the invading army is fearsome and requires all of Scandinavia to unite. However, Harald plans on executing Erik for being an outlaw and intends to reject the proposal of an alliance. Olaf talks some sense into Harald, however, and the alliance is accepted, on condition that Bjorn leaves Kattegat and joins Harald.

In Iceland, Ubbe and Torvi have their first baby together. Torvi nearly dies but manages to pull through, partly due to the prayers of a wanderer. Later, he is revealed to be a Christian monk, Athelstan. He claims to have taken the identity of his traveling companion, who grew old and died. However, a flashback shows Athelstan killing him, so we know he is a liar.

He also speaks of a golden land, far to the west, and Ubbe wants to go there, to have his own adventures. It also appears that Flatnose and the others are keeping a secret from Ubbe, but it is unclear what this is. The upcoming episode promises to bring conflicts, and perhaps this secret to light.