When Does Vikings Season 6 Episode 6 Start? 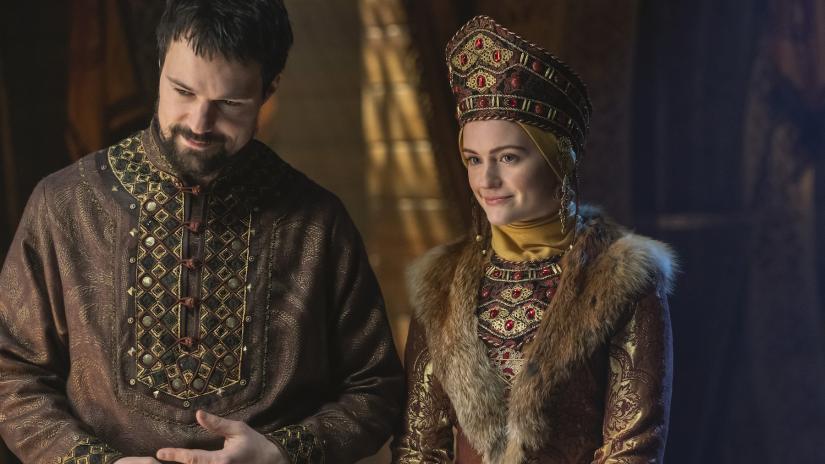 ‘Vikings‘ is a retelling of the legends of Ragnar Lothbrok, the Norse hero. He rose from a humble agrarian life, to lead some of the most successful raids, which made him the scourge in the eyes of countries like France and England. However, the show has expanded over the seasons, to not just talk about Ragnar’s life and adventures, but also his legacy. Therefore, we follow Ragnar’s sons, and the lives they carve out for themselves.

Season 6 is off to a good start, as we have seen how Bjorn has struggled with the responsibilities of being a ruler, often finding it hard to make the correct and just decision. Ivar finds a new friend in Oleg, who might be just as reckless. However, their relationship becomes burdened with time. The last episode was an example of Lagertha’s return to action, rallying the villagers to fight off the bandits. However, this ascension to a position of leadership comes after Lagertha loses Hali, the child put in her care.

Ivar’s discontent at being boxed in begins to show, as Oleg’s reasons for supporting him become clearer. Episode 5 begins with things poised to become even tenser. Naturally, you must be wanting to know what happens in the latest episode, and we are here to tell you that. However, first, let us walk you through when and where to watch the upcoming episode of ‘Vikings’.

Vikings Season 6 Episode 6 Release Date: When Will It Premiere?

‘Vikings’ Season 6 Episode 6 is slated to air on January 8, 2020, at 10/9C on the History Channel. The upcoming episode has been titled “Death and the Serpent”. David Frazee directs the 44-minute episode.

The plot follows Bjorn, who is forced to act quickly after the election of the King of Norway. Meanwhile, bandits attack Lagertha’s village again, believing they will be victorious. However, when it boils down to single combat with Lagertha, victory is less certain for the looters. Back in Kattegat, Hvitserk is haunted and paranoid, as he continues to unravel.

You can check out the promo for the upcoming episode below.

Cord cutters are in luck because there are some other options that can be explored, including Philo TV, DirecTV, Hulu Live TV, Fubo TV, Amazon Prime, and Sling TV. Some of these options even offer a free trial period before they start charging you for the services.

Episode 5 has been titled ‘The Key’ and is a welcome change of pace from the other episodes. It does slow things down but builds towards where the future of the season will go. First off, we see that the election for the ruler of Norway is well underway. Bjorn seems to have the edge now, with two of the four votes. He just might win, but it remains to be seen if one of the contenders takes matters into their own hands.

King Olaf is a definite surprise in the episode, choosing Bjorn with his vote. However, the Mad King might have something up his sleeve, and his reaction to Harald choosing Bjorn might indicate that Olaf has something unpleasant planned for the man. The warring forces have to eventually take decisions to benefit everyone, but they have been in conflict for so long, it is unclear if they can put aside their differences.

Gunnhild arrives at Lagertha’s village and serves as the fresh blood needed to rally more people in order to keep the bandits away. Meanwhile, Ivar continues his evil planning, as we realize that a final confrontation is very likely between Ivar and Oleg. Now that Torvi and Ubbe know where he is, things could certainly get more interesting.

In conclusion, the episode sets up some fascinating points which will affect the narrative of the upcoming episodes. Lagertha’s arc is certainly interesting, and she might make a sacrificial play. The election for the ruler of Norway and Ivar’s schemes also remain vital aspects of the story that are bound to be explored in greater detail.