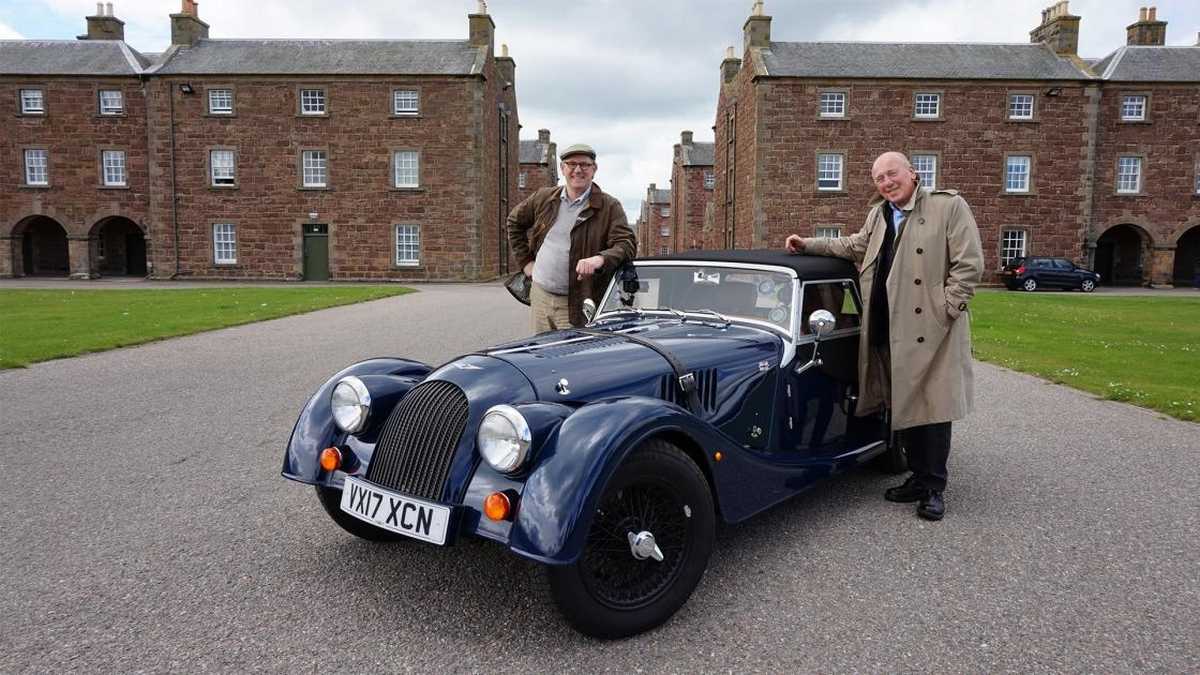 ‘Vintage Roads’ is a documentary television series that aired in 2018. Actors Christopher Timothy and Peter Davison take the audience on a nostalgic journey into the past, to the golden age of motoring in the UK. The show puts them behind the wheels of one beautiful classic car after another, as they take road trip after road trip along some of the most beautiful vintage roads and trails in the land seeking to recapture the thrills of a bygone era when people in the isles first started their love for motor cars and used open road as a way to access adventures and engage in exploration. The show is produced by Tern TV, an independent production house based in Scotland and Northern Ireland, for More 4. It is available to stream on Prime Video.

Vintage Roads Cast: Who’s in it?

Christopher Timothy and Peter Davison, known as one of the most popular TV duos, as a result of their All Creatures Great and Small roles, take us back to the 1930s, again, to experience what is known as the Golden Age of Motoring. With their 1936 Morgan 4/4 – the oldest production car in the world – they give up modern conveniences like GPS systems to road trip along beautiful vintage roads in rural Britain, the old-fashioned way. The faces of the show, Christopher and Peter, rely on old travel guides for inspiration to take in the iconic sights of this region, all in the good old motorist’s way.

Vintage Roads Plot: What is it about?

‘Vintage road’ is programming with a difference, combining as it does a little bit of history, a little bit of nostalgia, and a little bit of a traditional travelogue. When the two “stars” of the series, the actors who originally featured in All Creatures Great and Small reunite and take the wheel of a Morgan 4/4 vintage car, originally designed in 1936, they take the audience on a road trip on Britain’s beautiful vintage roads. The show accompanies Peter and Chris as they start their trip from London and drive down the A30, which originally used to be a coach road in the 18th century. Today, this highway runs for almost 300 miles through stunning and spectacular countryside and ends at the appropriately named Land’s End.

They drop satellite-aided navigation in favour of old-fashioned travel guidebooks, catch up with the many passionate petrol heads – dedicated motorists who have continued the tradition and kept up that part of the national heritage. As they meet these enthusiasts, they also find themselves making the hands-on acquaintance of some of the rarest old cars in the world, like a 1934 ERF Lorry, a 1900 Georges Richard, NS an Arrol-Johnston Dog Cart.

Episode one follows Chris and Peter as they start on their first vintage adventure in the Scottish Highlands. They follow old military roads which are mostly one lane roads and are even unpaved, occasionally. They manage to arrive at their destination relatively unharmed and in one piece, after detouring to see Fort George swing by Loch Ness, and joyriding in a three-wheeled rally car. Episode two sees them down the old coaching road – once the oft-traveled route to Cornwall – to recreate the first recorded car journey in Britain, picnicking along the roadside, as they go. Episode three sees them traverse Wales to go on an epic 180-mile road trip with many an interesting twist and turn along the way – both literally and metaphorically.

The idea for the show might have seemed sound, and interesting, but it may seem like something got lost in the actual making of it. The finished product, all three episodes of it, seem to lack both rigour and tension as well as the compelling history, according to critics. According to one review, “As they made their way from Inverness to the Isle of Skye along poorly maintained “military roads”, they met fellow car enthusiasts, marveled at the landscape and rustled up the occasional genuinely interesting historical insight. Tension proved elusive. Might the Loch Ness Monster make an appearance as they talked to Steve Feltham, a man who has hunting for Nessie since 1991 (“What am I going to look back on my life and wish I’d done?”), Feltham once asked himself.

Could Davison free the car when it gets stuck on a ramp? Would an approaching vehicle on a single-track road give way? Featuring blokes in sensible clothing, having a jolly time with “the old girl” and indulging petrol-head passions, the show was preferable to The Grand Tour, and the scenery was indeed glorious. But after Timothy had declared at the outset that “I’ve a feeling that Peter and I are in for one hell of an adventure, I felt like invoking the Trade Descriptions Act. This barely got out of first gear.”

Vintage Roads Season 2 Release Date: When will it premiere?

‘Vintage Roads’ Season 1 premiered on October 23, 2018. Now as far as the next season goes, we don’t have an official announcement yet. Though considering the uniqueness of the show, we would be surprised if it doesn’t get another season. Our best guess is that if the show does get renewed, ‘Vintage Roads’ Season 2 can release sometime in October 2019. We will update this section as soon as we hear more.

While we wait for an update on ‘Vintage Roads’ Season 2, check out this sneak peek into the show. If you haven’t seen the show yet, head over to Prime Video to catch all the episodes of the previous season.