WandaVision Episode 6: What to Expect? 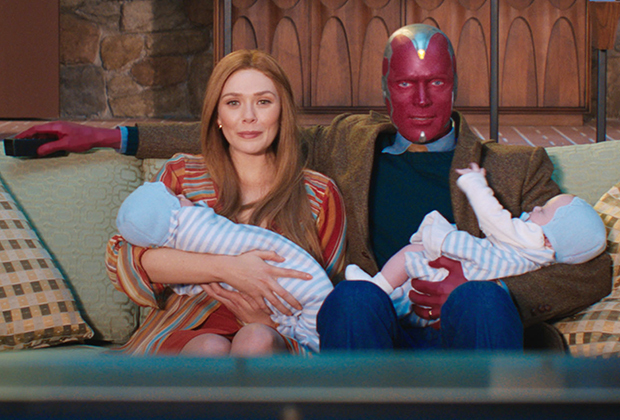 Episode 5 of ‘WandaVision’ reveals Wanda’s power, which is visible in her ability to materialize reality at will. Vision can see through the charade of Westview as he converses with Norm after removing him from Wanda’s control. At the same time, Wanda’s children are growing at an accelerated rate, fast-forwarding Wanda’s and Vision’s parental life.

Monica Rambeau figures out a way to enter Westview’s reality and tries to converse with Wanda. Tyler Hayward, the Director of S.W.O.R.D, antagonizes Wanda, forcing Monica to contest his hawkish approach. As the truth behind Westview unravels progressively, we decided to look further into the next episode. If you want to know more about episode 6 of ‘WandaVision,’ we have got you covered!

‘WandaVision’ episode 6 is slated to release on February 12, 2021, at 3 am ET on Disney+. The next episodes are scheduled to drop in every Friday.

Where to Watch WandaVision Episode 6 Online?

With Pietro’s arrival from the ‘X-Men’ franchise, it becomes clear that the Marvel Cinematic Universe has merged with X-Men. It changes the situation drastically, and we can expect the next episode to reveal further details about it. The confrontation between Wanda and Vision takes an emotional turn, and Vision will perhaps try to communicate with S.W.O.R.D to know more about the “Maximoff Anomaly.” Tommy and Billy are growing at an accelerated rate, and they might exhibit their own superpowers in the upcoming episode, especially because Wanda’s magic does not work on them.

Agnes is a recurring character in the fifth episode, and it seems that she knows about Wanda’s and Vision’s powers. She keeps a straight face when she sees the twins grow up magically. As has been speculated, Agnes’ true identity as Agatha Harkness might surface in episode 6 of ‘WandaVision.’ It remains to be seen whether she is an ally or an enemy who infiltrates Westview from within. Tyler Hayward’s stern approach and lack of sympathy for Wanda give an ominous vibe to his intentions. The upcoming episode will perhaps delve into the actual motives of Hayward and probably hint at a Hydra connection inside S.W.O.R.D.

Wanda and Vision enjoy their parenthood as their kids grow up at an accelerated rate. Agnes is present in front of them and is curiously oblivious to the magical happenings. Vision doubts Agnes’ erratic behavior and suspects the ongoing situation. In the outside world, Monica recuperates from her ordeal and is visited by Jimmy Woo and Darcy Lewis.

In a briefing conducted by Tyler Hayward, the agents discuss Wanda’s past, and Hayward indicates that Wanda is the victimizer. We get to know that Wanda had retrieved Vision’s body from a S.W.O.R.D facility before the Westview anomaly came into light. Monica deduces that Wanda is capable of rewriting reality to suit her needs. Darcy christens Westview’s forcefield as Hex, a term derived from the sitcom reality’s hexagonal symbols. They send in a drone to contact Wanda but are met with a strong response.

Wanda confronts them outside Westview and warns Hayward not to meddle with her situation anymore. Meanwhile, Wanda’s kid grows up further, as Agnes seems to be present around them and keeps track of their needs. Vision reads a mail from S.W.O.R.D that details the Maximoff anomaly and investigates the matter further. As the reality becomes clear to Vision, he confronts Wanda in an agitated state. Their impasse is broken by the arrival of Wanda’s brother, Pietro.