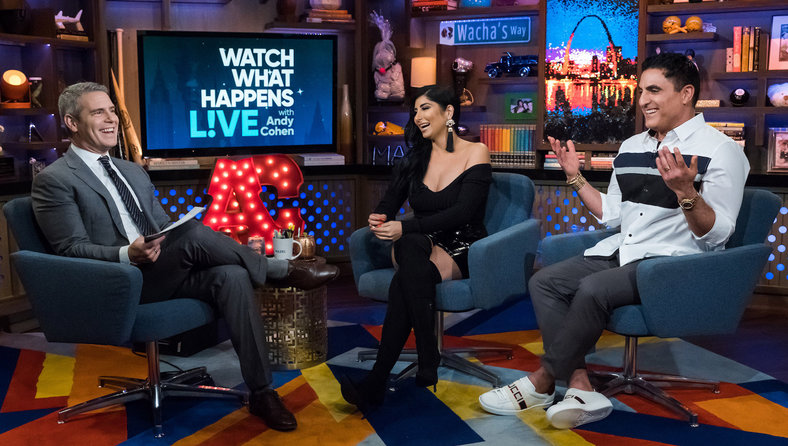 ‘Watch What Happens Live with Andy Cohen’ an American late-night reality talk show presented by Andy Cohen. It airs on the Bravo network and premiered for the first time on July 16, 2009. The show was initially called ‘Watch What Happens Live’ (abbreviated as WWHL). It is one of the most popular shows which has been awarded the Shorty Industry Award for Best Integration with Live Television, and nominated for Critics’ Choice Television Award for Best Talk Show (2018). Andy loves to interact with viewers and his fans by phone or through social media. He always knows what the viewers want and who should he call on the show next. He also brings a fresh dose of entertainment every night by starting a lively discussion about TV series, pop culture, and politics.

Michael Davies, Andy Cohen, and Deirdre Connolly are the executive producers of the show. It is Bravo’s own version of a reality program and is presented as an aftershow. It discusses recent celebrity news and since it is produced live from New York City, it is possible to interact with viewers over the phone or social media. The show has garnered a wide following due to Cohen’s affability and the celebrities he calls on set. Moreover, the conversations are free-flowing and frank, something which always appeals to viewers.

Watch What Happens Live with Andy Cohen Cast: Who is in it?

The main cast of ‘Watch What Happens Live with Andy Cohen’ is obviously Andy Cohen himself, who is the host of the show and keeps things going. Over the course of the seasons, various celebrities have made their appearances including Jimmy Fallon, Matthew Broderick, Jimmy Fallon, Laura Linney, Liam Neeson, Matt Bomer, Neil Patrick Harris, Jennifer Lopez, John Mayer, Amy Schumer, Jennifer Lawrence, among others. Jennifer Lawrence also famously remarked to Cohen, “I feel comfortable drinking and telling you inappropriate things here”, according to Variety.

While we are sure that Cohen will return to host the upcoming season as well, we hope to see even more new celebrities who Cohen can talk to on the show, leading to laughter, fun, and a generally good time for those on the show and those watching it.

Watch What Happens Live with Andy Cohen Plot: What is it about?

The plot of ‘Watch What Happens Live with Andy Cohen’ is centered around an interactive night talk show. It has featured A-listed guests like Meryl Streep, Gwyneth Paltrow, Cher, Will Ferrell, Oprah, Jennifer Lopez, Mariah Carey, Ryan Reynolds, and Jennifer Lawrence. Andy quickly gets the guests comfortable before they launch into conversation.

The show has a well-stocked bar cart, which helps the celebrities ease into talking about themselves, and as Cohen himself says, he likes to keep things inappropriate a lot of the time. Thus, what we see is a ditsy and kitschy show that often borders on the risque side of things, but one should expect that from a talk show with celebrities. What stands out here, is how Cohen allows for live updates during the course of the show. This allows viewers to provide him with feedback, which often gets incorporated into the show itself, as the host reads it out loud and then acts off it.

In fact, Cohen’s own mother once messaged him that she found his show to be inappropriate and boring. However, it is this inappropriateness that draws viewers. Whenever celebrities are concerned, nobody wants a vanilla show. Everybody wants a touch of salaciousness in the content, and Cohen delivers just that. It is to his credit that he does not make any of the information forced or distasteful. There is always a jovial atmosphere that ensconces the show, and the trick is to get the celebrities to want to give up some sordid detail or the other. It is fascinating to see shows that merely hinge on celebrity details gain such popularity. It speaks to society’s deeper psychological basis, where we put celebrities on pedestals and believe they are greater than us. However, with this validation that we so readily bestow upon them, our perversion also works to an extent where we want to know some dirty secret of a celebrity’s life, that proves to us that they are just as human as we are.

This is where Cohen and his show comes in. He delivers what we all want in our moments of indulgences, and it must be said of him, that he does so in a very well packaged manner. As various pop culture topics and celebrity lives get discussed, fans also get a glimpse into the minds of their favorite stars and how they view the world and what is going on around them. While a celebrity’s opinion would normally not be different from another person’s, or more valid than another person’s, it is a fact that celebrities are influencers. Therefore, it becomes rather enlightening to see what kind of message and life views they put out for their fans to follow.

Hopefully, in the upcoming season, the series will continue in a similar manner as Cohen continues to entertain us and the celebrities who he invites on his show.

Watch What Happens Live with Andy Cohen Season 17 Release Date: When will it premiere?

‘Watch What Happens Live with Andy Cohen’ Season 16 premiered on January 6, 2019. While the network has not greenlit Season 17 yet, there is no reason for them not to do so. Firstly, Andy is well loved by his audiences and the people coming on his show. Secondly, the celebrity presence keeps drawing viewers to the show. Thirdly, making it an interactive show draws more interest from viewers, as they feel involved and feel like they are a part of the show and can communicate with the host.

With all these positives working for the series, it is likely that a new season will be greenlit. Our best guess is that Watch What Happens Live Season 17 will release in January 2020, going by the release schedule of the previous seasons.

‘Watch What Happens Live with Andy Cohen’ Season 17 does not have an official trailer yet since it has not been greenlit. However, you can check out a clip from the show, here, to get a better idea of what it is about.