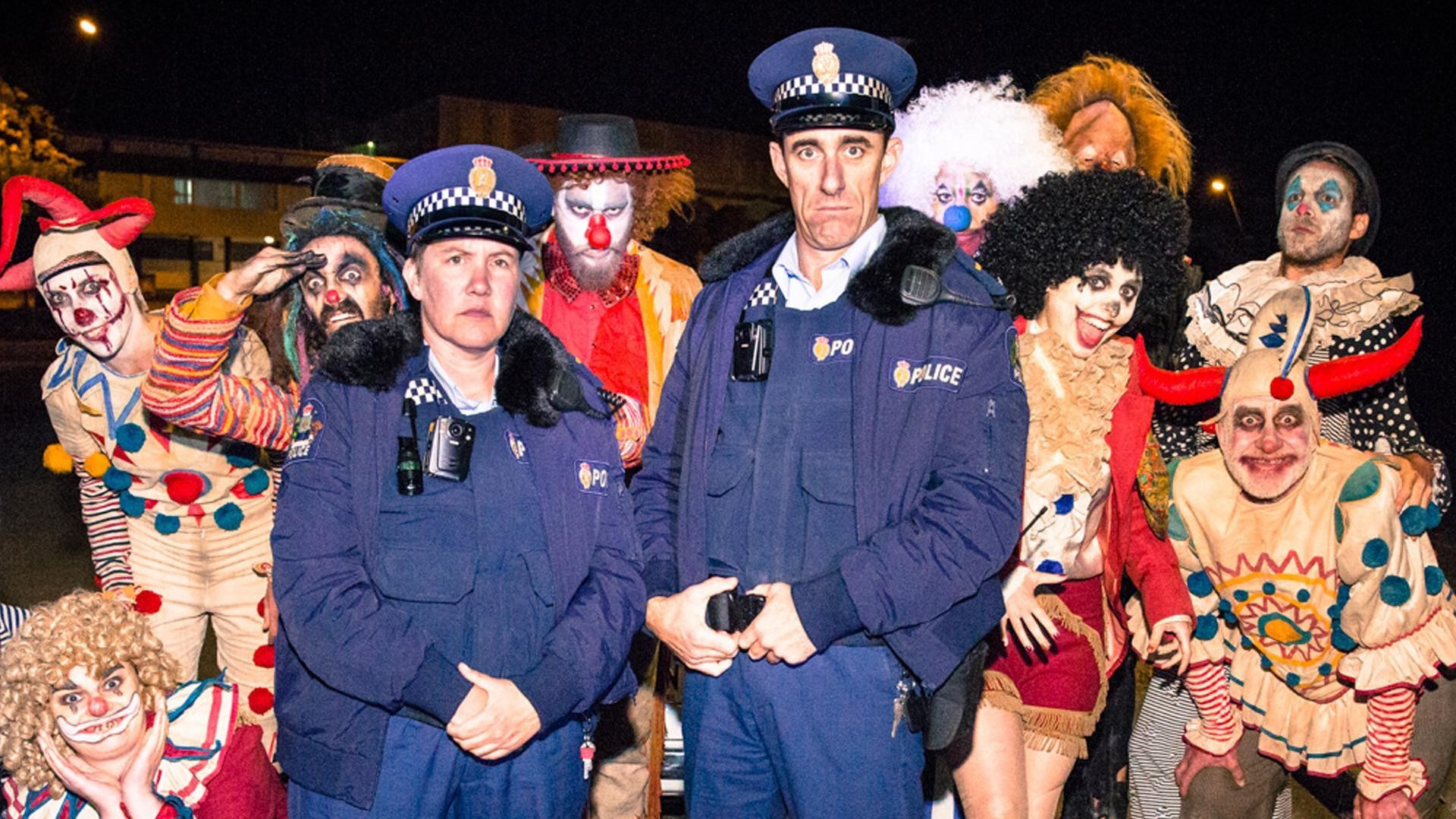 Life is not easy when your routine tasks include dealing with vomit-spraying possessed teens, werewolves, and sunlight-fearing vampires. But what do you do when this becomes part of your daily grind in the paranormal investigation department, located in a quiet town in New Zealand? Well, these are exactly the categories of cases tackled by two innocent coppers in ‘Wellington Paranormal’. Brain-hungry zombies and satanic demons are everyday occurrences in their lives. So what do they do? Carry on with their mundane activities with an unaffected tone, and often, turn the other way round, setting up the perfect premise for ‘this is fine’ type of deadpan humor.

‘Wellington Paranormal’ is a New Zealand mockumentary comedy horror series, that is a spin-off of the 2014-released, the cult classic film ‘What We Do in the Shadows’, which also gave rise to a TV remake with the same name. Created by Taika Waititi and Jemaine Clement, who also wrote, directed, and starred in the original movie, the series credits Waititi and Clement as the executive producers and Clement as the director for four out of six episodes (season 1).

Wellington Paranormal Cast: Who is in it?

‘Wellington Paranormal’ stars Maaka Pohatu as Sergeant Maaka. A supportive superior and a brilliant mentor, he is the boss of the newly established Paranormal Unit. Mike Minogue features as Officer Kyle Minogue and Karen O’Leary is Officer O’Leary. Throughout the episodes, the duo’s major goal is to stay alive while patrolling the nightly streets, searching for supernatural miscreants. For instance, sometimes a major win is when they can successfully hop over a gate and chase a suspect without getting stuck on the rails. These two goofballs have no amazing analytical skills or daredevil attitudes, but they do try hard to solve a problem when it needs a solution.

Wellington Paranormal Plot: What is it about?

‘Wellington Paranormal’ follows two awkward cops, Officers Minogue and O’Leary, after they are assigned to the Wellington Police’s Paranormal Unit. The duo is given the task of exploring and decoding the unexplained phenomena that happen in the after-dark hours on New Zealand’s streets. An incredibly entertaining spoof, it pays homage to several other hit crime shows and horror series as well as sci-fi dramas that have taken TV by storm in recent years.

One night, Minogue and O’Leary are summoned to investigate an incident where a young girl is projectile vomiting in Cuba Mall. She is apparently possessed by Bazu’aal of the Unholy Realm. She is caught and taken to the station, but she does some spiderman stunt and escapes. As Bazu’aal continues to plague the girl’s family, our cops perform an exorcism and successfully prevent the demon from opening a Hellmouth in the Bucket Fountain. They also need to tackle a bizarre incident when a cow is discovered at the top of a tall tree, suspected to be the antics of aliens. Further investigation leads the cops to find crop circles and seed pods in the fields and them being chased by plant-based extra-terrestrial entities.

Other cases covered by Minogue and O’Leary include a 1970s party where everyone vanishes once the lights are turned on, a pizza delivery boy who swears that he was mauled by a dog in jeans, strange sacrifice rituals, evil clowns, a vampire stealing blood from Wellington Hospital and illegally selling it to his other mates, and two fellow cops being bitten by a zombie while conducting his interview at the station.

With an inherently absurd premise, ‘Wellington Paranormal’ is extremely funny and entertaining. And especially, O’Leary’s straight-faced and sincere dialogue deliveries are devastatingly humorous. For example, in the incident when the ghosts of a certain house keep throwing the same party from the 70s, she addresses the room in a solemn voice: “I must inform you that you’re all deceased.” In fact, even the monsters have that same sense of deadpan comedy. In the above case, the ghosts simply accept the dismal fact that they have been dead for so many years. Of course, with geniuses like Taika Waititi and Jemaine Clement behind its making, we could not expect anything less!

Wellington Paranormal Season 2 Release Date: When will it premiere?

‘Wellington Paranormal’ Season 1 premiered on July 11, 2018, on TVNZ 2. After a run of six episodes, it concluded on August 15, 2018. Now, as far as a second installment is concerned, the creators have already announced that they have commissioned a renewal. Of course, this news does not come as much of a surprise. With the massive success of ‘What We Do in the Shadows’ franchise and the wide acceptance among the audience for ‘Wellington Paranormal’, it was expected. After all, it is about “Mulder & Scully but in a country where nothing happens.” So how could it not be popular?

Now, what about a release date? ‘Wellington Paranormal’ Season 2 can premiere sometime in October 2019. However, the makers have not come up with a fixed date as of yet. What we do know is that the second installment will comprise 13 episodes. So, get ready for more antics from the comedic cop duo. As for ‘Wellington Paranormal’ Season 2 release date, we shall update this section with a concrete timeline as and when we get an official confirmation.

Check out the official trailer for ‘Wellington Paranormal’ Season 1 below. Additionally, if you have not watched the show yet, you can head to its official site to catch up on the previous season.