What is Dr. Jackie Walters’s Net Worth?

Dr. Jacqueline “Jackie” Walters is a well-known philanthropist, award-winning OBGYN, and star of the reality series ‘Married to Medicine’. Born July 27, 1958, in Port Gibson, Mississippi, Jackie wanted to become a doctor from a very young age. She earned a bachelor’s degree in science from Mississippi State University and Alcorn State University, after graduating from high school. To finally fulfill her dream of becoming a doctor, Jackie earned a medical degree from the University of Mississippi School of Medicine and later completed her residency in Obstetrics and Gynecology from the Medical Center of Central Georgia and Mercer University.

Dr. Jackie Walters married Curtis Berry, a professional basketball player, in 2002. Although her life seemed perfect, in 2017, the couple was on the verge of getting a divorce when it was revealed that Curtis was cheating on Jackie. However, Jackie later said in an interview that they are giving their relationship another chance and since then there have been no reports of conflict between them. Jackie has made a fortune for herself in the last few decades, so let’s have a look at how she makes her money.

How Did Dr. Jackie Walters Make Her Money?

After graduating from medical school and completing her residency, Jackie became a prominent physician. Affiliated with Northside Hospital in Atlanta, she soon started her private practice. Her knowledge of cutting-edge technology and compassionate treatment of clientele, soon made her a sought-after OBGYN. Unfortunately, in 2004 and later in 2008, she was diagnosed with breast cancer. As a cancer survivor, Jackie used her experience to establish the 50 shades of Pink Foundation, which is dedicated to helping cancer patients fight the disease. Moreover, to promote a healthy lifestyle she also launched the ‘Fit is the New It’ campaign. 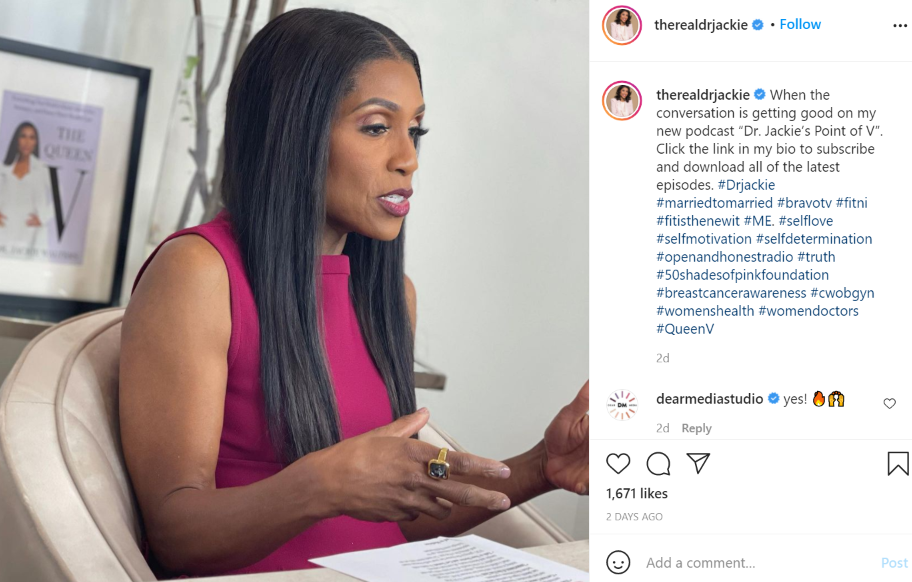 Although Dr. Jackie Walters’s career as a physician and philanthropist was going great, it wasn’t until 2013 that she became a household name. She graced the small screen on the superhit reality TV series ‘Married to Medicine’ and since then she hasn’t looked back. Jackie has used the platform to raise awareness about breast cancer and promote a positive female image. Her positive attitude, compassion, and sense of reason on the show won her huge fanbase.

Jackie has also featured in ‘Steve’ (the talk show), HLN, People.com, Glamour, among many others. In 2020, she released her book ‘The Queen V: Everything You Need to Know About Sex, Intimacy, and Down There Health Care’, which delves deeper into the subject of sexual wellness and gives readers invaluable advice from an experienced OBGYN. Jackie Walters’s career as a doctor, philanthropist, reality TV star, and now as an author has been extremely rewarding as she has added millions to her overall wealth. So, let’s have a look at how much she is worth now.

Dr. Jackie Walters’s net worth is estimated to be around $3 million. Considering, how she is still part of the successful reality series ‘Married to Medicine’ and has also written a book, we can presume that her net worth is likely to increase in the coming years as well.

Read More: Where Was Married to Medicine: Los Angeles Shot?