What is Mina Starsiak’s Net Worth?

Mina Starsiak is a reality TV star, author, real estate agent, and investor. Born on November 26, 1987, Mina grew up in Indiana along with her seven siblings. She studied in an Indianapolis school and later got a degree in general studies from Indiana University. Mina was uncertain of her career after college and ended up buying a house that she renovated along with her mother, Karen. The daughter-mother duo realized their true calling, which later grew into a successful career.

Mina dated Stephen Hawk for a while before the couple married in 2016. They had their first child, Jack, in 2018, while Charlie was born in 2020. Interestingly, they met each other through social media and had a terrible first date. But the couple eventually hit it off and now live in blissful matrimony in Indiana. Mina’s rise to prominence, thanks to her HGTV show and renovation business, has fueled the dramatic rise in her net worth. But before we discuss that, let’s have a detailed overview of how she makes her money.

How Did Mina Starsiak Make Her Money?

After graduating from college, Mina struggled as she was unsure what she wanted to do with her life. She was working as a waitress to pay her bills when she decided to take the leap of faith and buy her own house, which reportedly cost her around $37,000. She teamed up with her mother, Karen E. Laine, and while working on remodeling the house, the daughter-mother duo found their true calling. While Karen pitches great ideas, Mina ensures that she condenses them down to realistic models. It was their great teamwork that inspired them to establish Two Chicks and a Hammer, Inc, a renovation company based in Indianapolis. 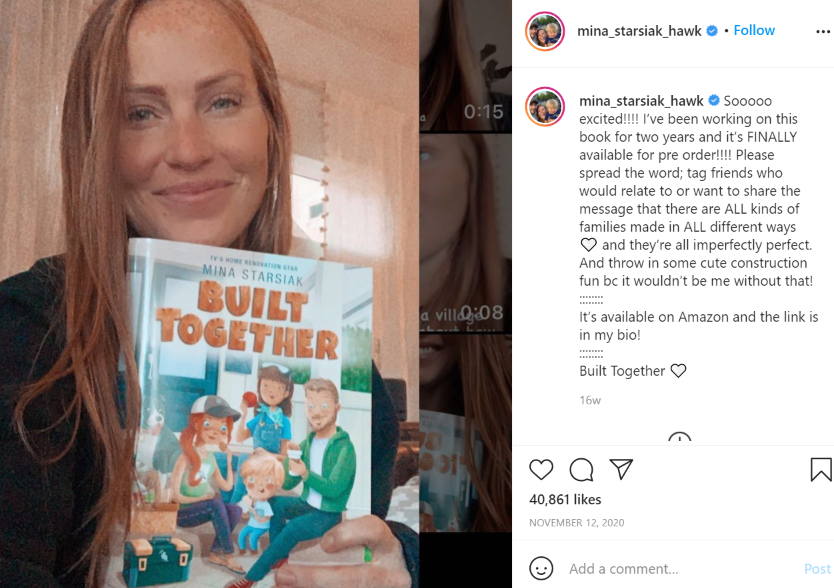 Their business was doing great when seven years after its conception, High Noon Entertainment, the production company behind ‘House Hutner,’ ‘Fixer Upper,’ and ‘Cake Boss’ contacted the mother-daughter duo. That’s when HGTV’s reality TV series ‘Good Bones’ was born, and since then, Mina has not looked back. The show has maintained a good overall rating, as it continues to entertain viewers with the revitalization specialists renovating one home after another. The series earned a lot of fans for Mina, and now she is a well-known public figure with significant social-media influence.

Apart from being a reality TV personality and running her renovation business, Mina is also an author who spent two years of her life writing the children’s book ‘Built Together.’ The book captures a heartwarming and humorous family story that anyone can enjoy. The book has done well, and it is likely that Mina might write more books in the future. Apart from ‘Good Bones,’ Mina has also been a part of ‘A Very Brady Renovation’ and ‘Rock the Block.’ Her net worth has increased significantly in recent years, thanks to her successful TV show and renovation business.

Mina Starsiak’s net worth is estimated to be close to $1 million. With the level of success Mina has seen in her remodeling and renovation business and with ‘Good Bones,’ we can safely presume that her net worth is likely to follow an upward trajectory in the future.

Read More: Is Mina Starsiak Married? Does She Have Kids?