What is Nichole Holmes’ Net Worth?

Nichole Holmes is a Nashville realtor and one of the co-hosts of the Netflix show ‘Marriage or Mortgage.’ Born on March 30, 1974, Nichole was raised in Marion, Illinois. After graduating from high school, Nichole earned an associate’s degree in general studies from John A. Logan College. She also has a degree in Radio and Television from Southern Illinois University. Even during her school and college days, she was interested in modeling. She participated in several local beauty pageants before she competed on the national level and ultimately became Miss Illinois USA in 1995.

Nichole has apparently been married (and divorced) twice. When she’s not selling dream homes, she has all her energies focused on raising her 5-year-old daughter – an adorable little girl named Arya. Nichole’s career as a model, TV host, and realtor has earned her a lot of money. Before we discuss her net worth, let’s have a detailed overview of how she amassed her wealth.

How Did Nichole Holmes Make Her Money?

While studying in college, Nichole pursued her modeling career on the side and became Miss Illinois in 1995. She went on to compete for the Miss USA title and finished as the second-runner up. Her success as a model made her quite famous in the city of Marion, where she was raised. She later worked for Shop at Home Network from 1998 to 2007, initially as a model and then also as a host. 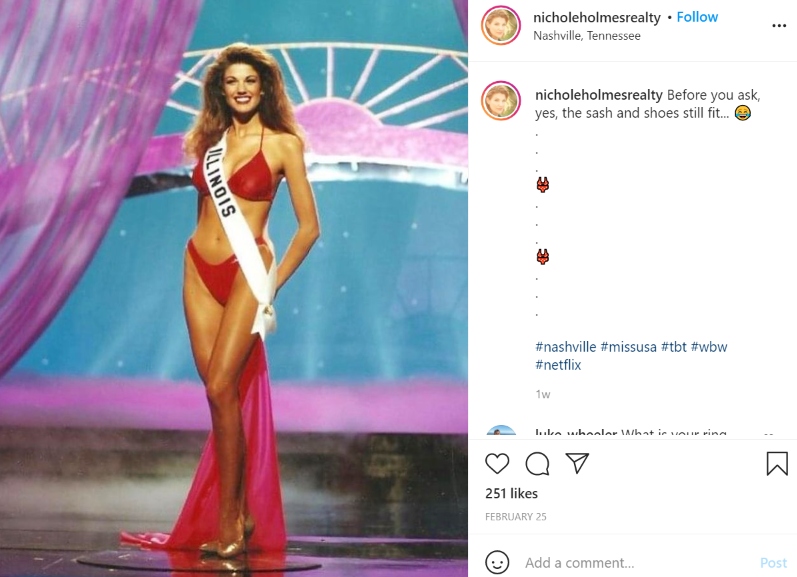 While working as the director of advertising for Sunshine Publishing Group in 2008, Nichole made a drastic change and began her career in real estate. From 2009, she worked for eight years at Sotheby’s International Realty Affiliates LLC. Since August 2017, Nichole has been working as an affiliate broker at Parks Realty. Her lucrative career in real estate has been gratifying (and remains her major source of income), but what catapulted Nichole into world-wide fame is starring as the co-host of a Netflix reality show.

In Netflix’s ‘Marriage or Mortgage,’ Nichole competes with wedding planner Sarah Miller for the business of 10 couples who have to pick between a house of their own or a beautiful wedding. So, after working as a model, TV host, realtor, advertising director, Nichole is carving out a name for herself in the entertainment industry as well. Her diversified career in several fields has helped her earn a huge fortune. So, without further ado, let’s have a look at her net worth.

Nichole Holmes has an estimated net worth of around $1 million. Since her fame is sky-rocketing with her entry into the world of reality television, we can expect to see more of her on our screens. Moreover, she works as a reputed and successful realtor, so it won’t be wrong to assume that her net worth is likely to increase drastically in the coming years as well.