What is Soleil Moon Frye’ Net Worth?

Soleil Moon Frye is an actress, screenwriter, and director, who rose to prominence with the NBC sitcom ‘Punky Brewster,’ in which she portrayed the eponymous protagonist. Born on August 6, 1976, in Glendora, California, Soleil is the daughter of veteran actor and boxing champion Virgil Frye. Her mother, Sondra Peluce, an actress and talent agent, is best known for films like ‘Night Hunter,’ ‘Baby Geniuses,’ and ‘Lost Highway.’ Under the watchful eyes of her popular parents, Soleil made her debut in the entertainment industry when she was only two years old. Her mother soon became her manager, as the actress climbed the stairs of success.

The actress married television and film producer Jason Goldberg. The couple tied the knot in 1998 and have four adorable children, but after twenty-two years of marriage, the couple separated in 2020 for personal reasons. Soleil’s career as an actress and director not only won her fame but also helped her amass a considerable fortune in the process. But before we discuss her net worth. Let’s have a look at her career so far.

How Did Soleil Moon Frye Make Her Money?

Soleil made her debut when she was just two years old in the television film ‘Missing Children: A Mother’s Story.’ Just a year later, in 1983, the actress played a supporting role in the movie ‘Who Will Love My Children?’ The following year she appeared in two other TV movies – ‘Ernie Kovacs: Between the Laughter’ and ‘Invitation to Hell.’ Still, she only became a household name with the NBC series ‘Punky Brewster,’ where she essayed the role of the titular character. Despite the low-ratings of the show, Soleil made a name for herself, thanks to the popularity of the character Punky. 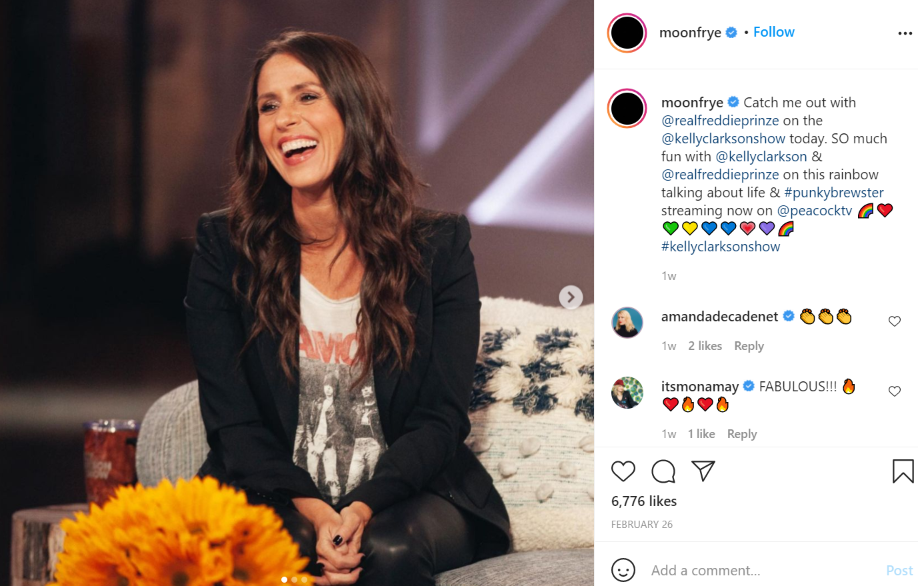 She went on to work in numerous television shows and films, including ‘Friends,’ ‘ABC Weekend Special,’ ‘Piranha,’ ‘The Killing Secret,’ ‘I’ve Been Waiting for You,’ and ‘Sabrina, the Teenage Witch,’ among many others. She studied at The New School after moving to New York in 1996 and just two years later directed ‘Wild Horses.’ In 2004, Soleil directed her second documentary ‘Sonny Boy,’ which won the Best Documentary Award at San Diego Film Festival.

But the multi-talented actress and director isn’t done yet. Soleil is the director (and producer) of the 2021 documentary film, ‘Kid 90’, which is executive produced by Leonardo DiCaprio. She has also lent her voice to several animated movies and television shows like ‘Bratz: Starrin’ & Stylin,’ ‘The Ren & Stimpy Show,’ ‘The Cartoon Cartoon Show,’ ‘The X’s,’ and ‘Planet Sheen.’ That’s not all; she also partly owns The Little Seed, an online clothing and retail store that sells environment-friendly children’s goods. Soleil’s decades-long career has been extremely rewarding, and the actress has earned a lot of money in the process.

Soleil Moon Frye has an estimated net worth of around $6 million. With the ‘Punky Brewster’ reboot, which can be renewed for more seasons, the actress doesn’t seem to have any dearth of work as she remains active. With her successful career in the filming and television industry, we can presume that her net worth is likely to increase in the future as well.

Read More: What is Wayne Brady’s Net Worth?