Where to Stream Betty? 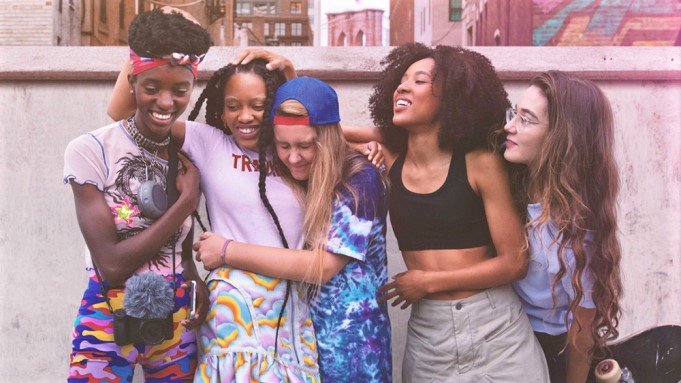 Based on Crystal Moselle’s movie ‘Skate Kitchen,’ ‘Betty’ is a teen comedy series that revolves around the sexist skating subculture that mocks women with the eponymous name to demotivate them from participating in the sport. With its five unique characters courageously confronting the discrimination of the skateboarding world, the series familiarizes viewers with the aspects of the sport that are untouched in popular culture. Curious to learn more about the show’s plot or where it can be streamed? You have come to the right place. Here’s everything you need to know.

What is Betty About?

In the male-dominated world of skateboarding, female skateboarders often face discrimination and are mocked by the derogatory nickname “Betty.” Although sexism often gets to some really talented girls, New York City-based Janay and Kirt are mentally stronger than girls of their age, and they always find a way to stick with each other through the thick and the thin. Kirt is the calmer one of the two friends, while Janay’s overflowing passion for skateboarding and no-nonsense approach to address the critics of the female participation in the sport is inspiring to say the least.

The life of these two friends changes when they coincidentally meet three other teenagers – Camille, a dexterous skateboarder who wants to someday prove that she is just as good as the boys; Honeybear, an introverted filmmaker who does not like to be the center of attention; and Indigo, a rich girl who prefers to keep her identity a secret. All of them have a similar worldview, but there are also differences that sometimes lead to conflict.

But the story primarily revolves around their interaction with the world of skateboarding and the sexist culture that dominates it. If you are intrigued to learn how these brave girls face mockery and condescension still remain true to their beliefs, then here’s all the streaming information you will need once you find the time to watch it.

Is Betty on Netflix?

Netflix subscribers will have to check other platforms as ‘Betty’ is currently not part of its impressive catalog. Viewers looking for a similar show on the streaming giant can alternatively watch ‘Zero Chill,’ ‘Spinning Out,’ or ‘Cheer.’

Is Betty on Hulu?

If you have HBO add-on Hulu, then you can head here to stream ‘Betty’ on the platform.

Is Betty on Amazon Prime?

‘Betty’ is available as video-on-demand on Amazon Prime. You can purchase a single episode or the entire season here. People who are subscribed to HBO Max on Prime can also watch the show on the mentioned link.

Where to Watch Betty Online?

You can stream ‘Betty’ on VOD platforms such as Vudu, FandangoNow, Microsoft Store, iTunes, Google Play, and YouTube. The teen-comedy series is also available on DirecTV, Spectrum, AppleTV, YouTubeTV, Xfinity, and HBO Max.

How to Stream Betty for Free?

YouTubeTV comes with a two-week free trial, while DirecTV and AppleTV offer a seven-day free trial. So, you can watch the show on these platforms for free. However, we recommend our readers watch their favorite shows and movies online only after paying for them.