Where To Stream Chaos Walking? 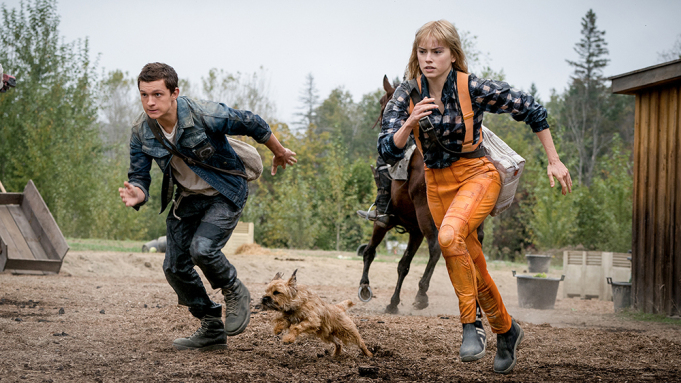 Adapted from the first novel of the book trilogy of the same name written by Patrick Ness, ‘Chaos Walking’ is a sci-fi young adult adventure film directed by Doug Liman. The film features a talented cast comprising of Daisy Ridley, Tom Holland, Mads Mikkelsen, Demián Bichir, Cynthia Erivo, Nick Jonas, and David Oyelowo. It follows the story of Todd Hewitt, who vows to protect Viola, a mysterious girl from another planet who holds the key to unlocking the secrets of the planet “New World.” If you are enticed by the film’s intriguing premise and feel it is quality entertainment that you’d like to consume, here’s everything you need to know about how to watch ‘Chaos Walking.’

What is Chaos Walking About?

The film tells the story of Todd Hewitt, a normal boy living on the alien planet ‘New World,’ which is colonized by humans. The planet is wrapped in a never-ending cascade of a force known as – the Noise, which allows everyone on the planet to hear each others’ thoughts. The Noise results from the “germ” released by the planet’s native people known as the Spackle. The germ has wiped out nearly all life on the planet, including all women and the Spackle. Todd discovers a mysterious young girl, Viola, who has crash-landed on the planet and lacks the Noise. Todd and Viola search for a settlement while being pursued by the army of Prentisstown, Todd’s former home, which he is forced to flee. In their search, they find out a dark secret about the planet’s past.

Is Chaos Walking On Netflix?

‘Chaos Walking,’ unfortunately, isn’t a part of Netflix’s wide variety of offerings. However, should you wish to indulge in a similar dystopian sci-fi adventure adapted from a book we recommend ‘The Midnight Sky,’ which follows a scientist who must race against time to send a message to astronauts in space to not return to the surface of the earth since a global catastrophe has wiped out most of humanity.

Is Chaos Walking On Amazon Prime?

‘Chaos Walking’ is currently not available on Amazon Prime. Instead, you can choose to stream ‘Encounter,’ a similar sci-fi film that follows a group of friends who discover a mysterious creature from another planet and try to protect it from the clutches of the government while also trying to understand its true motivations.

Is Chaos Walking On Hulu?

‘Chaos Walking’ hasn’t been added to Hulu yet. However, Hulu offers a plethora of other titles, among which ‘The Maze Runner: The Death Cure’ (about a group of friends uncovering the secrets of the dystopian world they live in) should appeal to you. The young-adult sci-fi film is also based on a book series.

Where to Watch Chaos Walking Online?

‘Chaos Walking’ can currently only be watched in theatres. You can buy your tickets here.

How to Stream Chaos Walking For Free?

There is currently no method to stream the film for free since it is only available in theatres and hasn’t been released on demand. We will update this space once ‘Chaos Walking’ is released on digital streaming platforms that offer free trials.