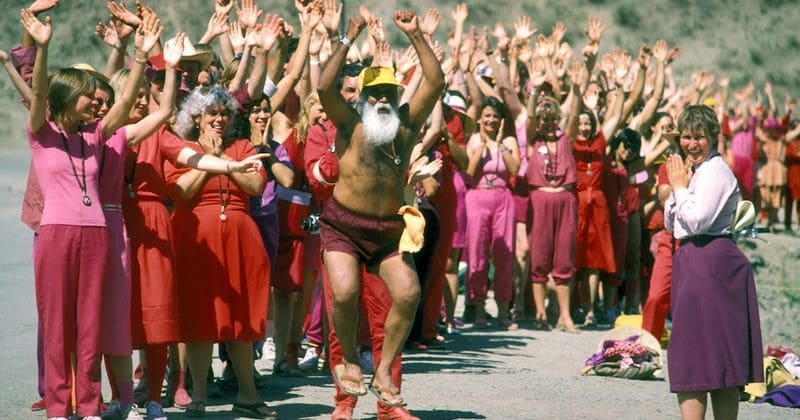 When we think pop history in recent cultural memory, we think of the big events that shaped the political landscape in the long-term, like the Kennedy assassination, Pearl Harbour, and the many clusters of stories related to the cold war. Naturally, most of the documentary shows on ID or Smithsonian also cover these often-highlighted stories as well, while the other, less widely significant but wildly intriguing stories fly under the radar.

The Netflix original Wild Wild Country is a show that tries to shed some light into the latter category through a once (in) famous but now forgotten counterculture movement in the early 1980s Oregon. The six-episode miniseries follows the disasters that sprung from the cult of the Indian Guru popularly known as Osho through a thoroughly researched array of contemporary footage, documents, and archives, calling the idea of good and evil in question as an undercurrent.

As the most introspective piece of journalistic work ever created on the matter, Wild Wild Country brings in all major figures concerned in the Osho story as its cast – including the man, the myth, the legend Osho himself, his second-in-command Ma Anand Sheela, and his doctor George Meredith. Hypothetically, if the prospect of a Wild Wild Country follow-up season were to exist, the production team would certainly attempt to bring more of exclusive one-on-one interviews with the key historical figures. This means the recasting of Osho, Ma Anand Sheela, George Meredith, Krishna Devi, Jane Stork, and Philip Toelkes. However, such an idea exists only in a hypothesis, and it is unlikely we will see a second season at all, all things considered.

Wild Wild Country Season 2 Plot: What is it about?

Wild Wild Country tracks the journey of Osho into U.S., and the conflict of his group with the local Oregon community, who saw his attempts to establish the ashrama as the onset of a much-maligned hippie culture, and of course, the horrifying events that ensued when Osho’s subordinates had taken up extremist measures to face the opposition – the mass food poisoning, and the attempted murder of U.S. Attorney Charles H. Turner. The show makes use of every journalistic device at its disposal – contemporary newsmedia footage, police and government archives, as well as one-on-one interviews with Osho and other key figures who comment on the events in hindsight.

Wild Wild Country Season 2 Release Date: When will it premiere?

Wild Wild Country is as good and interesting as probe documentaries get. It is at the same time accessible and thorough, covering every major known side, as well as previously unknown angles to the story with the direct exclusive interviews. That said, coupled with the fact that documentary miniseries like these are usually always one-offs, the possibility of the second season is next to none precisely because it covers everything. That said, the cultural impact of Rajneshee’s movement makes it more than just an isolated event of political intrigue, power dynamics and conflict.

Content-wise, the mini-series has a proper closure at the end. On the other hand, the overwhelmingly positive reviews and critical acclaim may prompt Maclain and Chapman Way to consider a follow-up season, since it is also likely that quite a large amount of footage salvaged for the investigation remains unutilized in the small frame of six episodes. Only time may tell, and officially, since the renewal status is so far unconfirmed, a tentative air date for Wild Wild Country Season 2 is TBD.

Since it is uncertain whether the docu-series will be renewed for a new season at all, no new trailers or teasers for the same have been released either. Here you can instead check out the official trailer for the debut season.