Will There Be a Hell Fest Sequel? 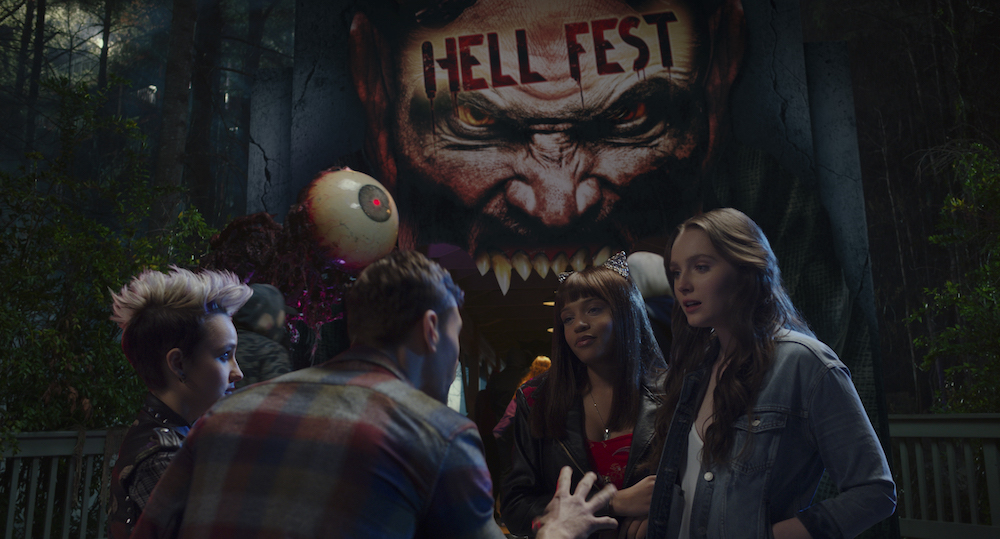 Directed by Gregory Plotkin, ‘Hell Fest’ is a slasher film that follows a group of friends as they visit Hell Fest, a horror-themed Halloween carnival. As the friends are about to enjoy their Halloween night, a masked killer stalks them with evil intentions. Initially, the killer appears to be a part of the carnival as he effectively blends in with the Hell Fest’s masquerade. It becomes difficult for the friends to identify the real threat but soon they realize the danger to their lives. The killer starts murdering them in brutal fashion- much to a slasher fan’s liking. The film ends on an intriguing note, and if you are wondering about the sequel, you are in the right place!

‘Hell Fest’ premiered internationally on September 27, 2018, in a few countries like Hungary and Singapore. Its domestic release followed a day later. The film received favorable reviews but didn’t turn out to be a box office success even though it earned more than $18 million against a $5.5 million production budget. However, given the additional marketing cost, the profit wasn’t enough to justify a sequel. Moreover, ‘Hell Fest’ is a slasher flick that was released in theatres.

Given that there are plenty of independent slasher films releasing on VOD, ‘Hell Fest’s sequel’s theatrical release seems a bit far-fetched. There hasn’t been any official news regarding ‘Hell Fest’s sequel from the production house, even though there are many possibilities regarding its narrative. But given that ‘Hell Fest’ was in production limbo for quite some time, there are slim chances of reviving the franchise. Nevertheless, the filmmakers could decide to oblige the ardent fans with another installment. In that case, we can expect the ‘Hell Fest 2′ to release sometime in 2023 or later.

‘Hell Fest’ stars Amy Forsyth as Natalie, who remains alive at the end of the film, along with Reign Edwards, who essays Brooke’s role. Bex Taylor-Klaus portrays Taylor, who is unfortunately killed by the masked killer. Christian James appears as Quinn, whereas Matt Mercurio plays the role of Asher. Roby Attal also appears in the film as Gavin. The male characters are killed in the film, and in the eventuality of a sequel, we can expect Amy Forsyth and Reign Edwards to reprise their roles. Horror icon Tony Todd essays the role of the Barker, and we might also see him in the probable sequel.

At the end of ‘Hell Fest,’ we see that the killer is a person who has a child. Unlike the vendetta-driven murderers of slasher films like ‘Halloween’ and the ‘Friday the 13th’ franchise, the killer of ‘Hell Fest’ is a monster living within the community. His multiple masks in the cupboard indicate that he goes on a killing spree in other carnivals where he easily merges within the public. The sequel can open up many possibilities. Will the killer get caught? How many times has he gone on a similar killing spree? What are the motives behind his murderous acts?

The answers to these questions will perhaps be dealt with in the sequel. After all, Gregory Plotkin has had ample experience working in the horror genre. He edited films like ‘Get Out’ and ‘Happy Death Day.’ His directorial debut was with ‘Paranormal Activity: The Ghost Dimension.’ Given his expertise, the resurgence of ‘Hell Fest’ will perhaps explore a different dimension of the slasher genre.

Plotkin said about the sequel in an interview, “There’s this whole idea of that mask room was kills that [the villain has] done in years past. I have thought through quite a few fun new kills we could employ and some different scenarios. Six or seven years ago, these parks were not as elaborate and intricate as they were today. We have a lot of different geographical locations where we could stage a park. If we’re lucky enough to do it, I would love to. But, unfortunately, it’s not in my hands right now.”