Will There be a The Boarding School: Las Cumbres Season 2? 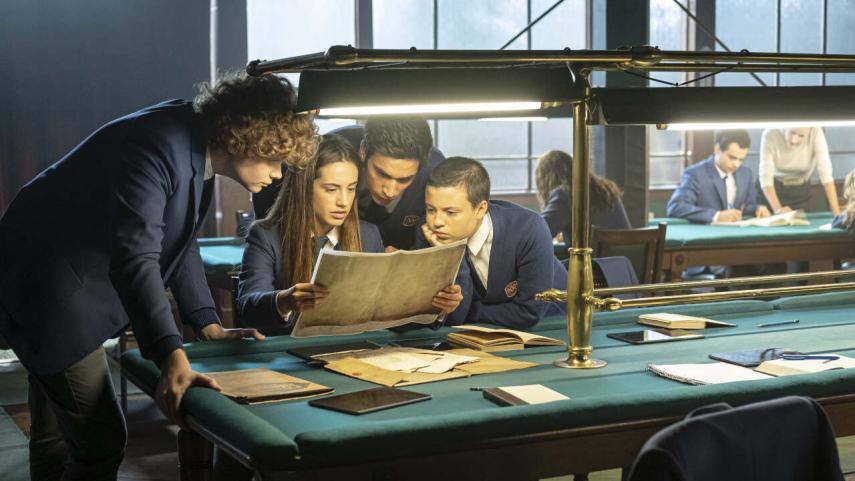 Also known as ‘El internado: Las Cumbres,’ ‘The Boarding School: Las Cumbres’ is a reboot of the hit series ‘El internado’ that ran from 2007 to 2010. The mystery thriller follows a group of students living in a boarding school that is impenetrable as a fortress. Students at the school have to strictly follow all the rules without any excuses. When two students at the school manage to escape, they realize that the world outside is even harsher. One of the students, Amaia, who is lost in the woods, tries to explain the dark mysteries of the uninhabited woods after coming back.

Unfortunately, the students are so cut off from the outside world that it’s hard to believe what she says. Soon, they discover several drawings in the library that confirms Amaia’s story. The dangerous cult known as the Crow’s Nest inhabits the woods, and Las Cumbres is not just a school. As the story progresses, the characters learn dark mysteries about the school and the uninhabited woods that surround them. Just like the original series, the reboot has been well-received, mostly for its suspenseful plot, well-timed scares, and compelling performances. If you are wondering whether there will be a season 2, we have got you covered!

‘The Boarding School: Las Cumbres’ season 1 was released in its entirety on February 19, 2021, on Amazon Prime. It consists of eight episodes with a runtime of 46-54 minutes each.

As far as season 2 of the series is concerned, there is still no confirmation about its renewal as of now. Season 1 ends with everything in chaos. Owing to the inconclusive ending, clueless and confused fans are yearning for the series to return with another season. It has also garnered a positive response from the viewers, thus strengthening its chances of getting recommissioned.

The principal shooting for season 1 began in early 2020 in Northern Spain, and the show dropped in early 2021. Since Spain has recorded a very high COVID-19 contagion ratio, it looks like fans will have to wait for a while for the second season. If the show gets renewed soon and shooting begins by Spring, we can expect ‘The Boarding School: Las Cumbres’ season 2 to release sometime in early 2022.

The Boarding School: Las Cumbres Season 2 Cast: Who can be in it?

The series features Spanish actress and dancer Asia Ortega as Amaia. She is well-known for her roles in the movies, ‘Tu hijo’, ‘When Angels Sleep’, and ‘Malnazidos’. Albert Salazar essays the role of Paul. Joel Bosqued, who rose to prominence for acting in several shows in Catalan regional television, plays the role of León. Alberto Amarilla, Mina El Hammani, and Claudia Riera portray Elías, Elvira, and Inés. Other notable cast members include Paula del Río, Carlos Alcaide, and Daniel Arias who play the role of Paz, Manu, and Eric. Most of the cast members will reprise their roles in the upcoming season.

The Boarding School: Las Cumbres Season 2: What can it be About?

Season 1 ends unexpectedly with Inés struggling to make sense of her past and everything else out of control. Even though students were still mourning the death of Manuel, another unexpected death motivates them to start a rebellion.

In season 2 of ‘The Boarding School: Las Cumbres,’ the students will have to stand up for each other. The unexpected death is likely to bring them together. We still don’t know what will happen to Elías after he is moved to another monastery. With Elvira trying to share whatever she is aware of, we must be prepared for a roller-coaster of emotions in the upcoming season.