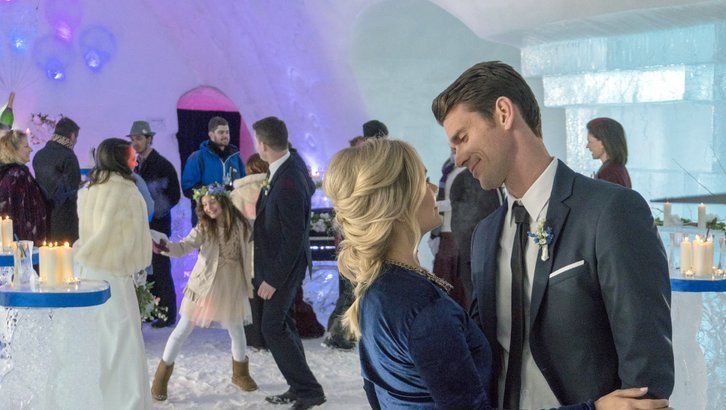 Hallmark is a television network which brings out a number of original films all around the year. Their annual runs of Christmas films and winter films have a huge fan following. Although most 0f these films are made almost on similar themes, the beautiful locales and the brilliant actors are what the audiences keep coming back for. After all, who does not like watching a brand new film from the comforts of their homes?

The Hallmark release ‘Winter Castle’ is one such original film which is directed by Marita Grabiak and written by Barbara Kymlicka. The central character of the film is a woman called Jenny who has spent most of her life in the warmth and sunny atmosphere of California. Jenny has a sister called Meg who has planned a destination wedding for herself to be held at a hotel entirely made of ice. The stunning beauty of the hotel immediately captures Jenny’s fancy. The only thing she likes more than the hotel’s decor is the best man Craig. The story then traces the romantic relationship that develops between these two characters.

The character of Jenny is portrayed in the film by Emilie Ullerup while Kevin McGarry plays Craig. Ullerup has earlier worked in the TV shows ‘Chesapeake Shores’ and ‘Sanctuary’ among a host of other performances in film and television. McGarry’s most famous works include the shows ‘When Calls The Heart‘ and ‘Heartland‘. Other important members of the cast include Meghan Heffern, Habree Larratt, Melanie Mullen, and others.

Right since the first look of the film was revealed, audiences were quite eager to know where the ice hotel is located and if they too can go and spend some time in this magical structure. Read on to find out more about it:

For small-budget films like ‘Winter Castle’, choosing the perfect filming location is like getting half the job done. These movies are usually shot on tight-budgets, and thus the producers simply cannot afford to move the entire cast and crew from one country to another. What such productions usually do is that they set their films in indoor locations or choose certain parts of Canada as the filming location where tax incentives become a huge bonus for them. The producers of ‘Winter Castle’ also chose a similar route and filmed the project almost entirely in Canada.

The internet is abuzz with questions about where the ice hotel shown in ‘Winter Castle’ is located. The establishment is actually located in the Saint-Gabriel-de-Valcartier municipality in the Canadian region of Québec. The hotel, named Hôtel de Glace, is actually 20 minutes to the north of Québec City. This hotel is the only ice hotel in North America, and remains open for three months only- from January to March. The filming of ‘Winter Castle’ was done just before the hotel closed for the year. Here is an image of the structure from the outside:

This brilliant hotel boasts of a chapel, an ice slide, and an ice-themed bar as well. The hotel has WiFi-enabled rooms for its guests, but does not allow pets within its premises. You can book a room for yourself in the hotel, but demands are exceedingly high since it only remains open for three months. Interestingly enough, the hotel melts every year and has to be again rebuilt before opening up during winter. This is the famous Ice Bar of the hotel:

While Hôtel de Glace served as the location for filming the indoor scenes of the film, the exterior scenes were all filmed at the Cumberland Heritage Village Museum in the Canadian province of Ontario. The entire site is made keeping in mind the look of rural areas in North America during the 1920s and 1930s.

Many films which want to go for the small-town look and want a compact area for filming their movies have traveled to the Heritage Village Museum for the same. The site has everything including a train station, a schoolhouse, a blacksmith’s shop, and even a garage. During winter, the site gets a different look altogether with snow everywhere, and 30,000 lights being lit for Christmas. Although it is a museum, the site mainly serves as a filming location.