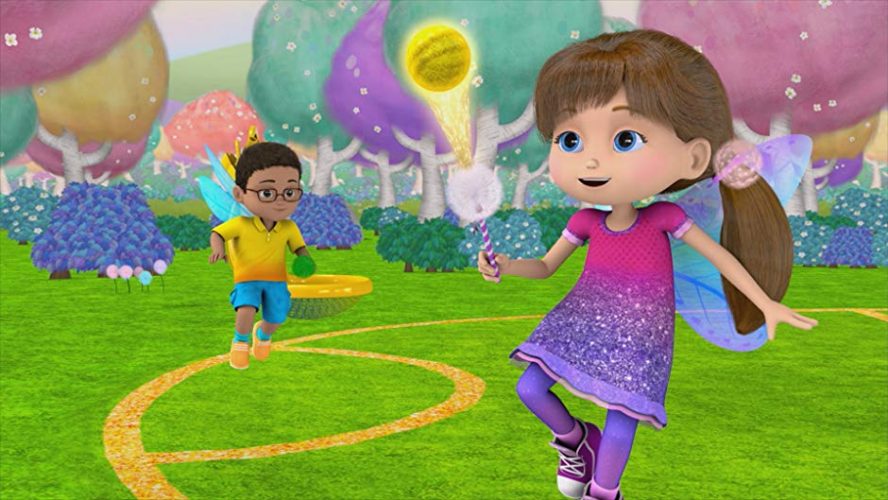 Wishenpoof is a lovable American-Canadian animated series created by Angela. C. Santomero who has a Masters in Child Development Psychology. The series is about a young Fairy girl named Bianca who has magical wish powers. She goes on many adventures throughout the episodes learning about values, friendship and many other life lessons. Angela is responsible for many great and influential programs and books for children. She has also created shows like Blues Clues, Daniel Tiger’s Neighborhood, Creative Galaxy and Superwhy! Her aim is not just to make the shows fun for kids but also informative and influential in the development of their early stages in life. The show premiered on 14 August 2015 for the first time on Cartoon Network and can be streamed Amazon prime as well. After the first successful run of the first season, it returned on 26th September 2017 and has aired about 33 episodes so far.

Wishenpoof Cast: Who is in it?

The characters of the show are as follows: Bianca the six-year-old, blue-eyed, brown-haired fairy girl. Bartholomew, Betty, Bouncer, Lola, and Beatrice, are teddies from the Enchanted Forest. Ben is Bianca’s little brother. Bianca’s dad, mom( who also possesses wish magic) and her Fairy Godmother. Bob who is also known as Bob, the Bear, is Bianca’s teddy bear and her best friend; he is also from the Enchanted Forest. Bruno who is an ogre who is friends with Bianca’s fairy grandmother. Charlie, Violet, Penelope, and Oliver are Bianca’s friends and schoolmates. Frank and Laurel are more of Bianca’s friends she plays with who also have wish magic. Froovle is Frank’s pet. Miss Bridget is Bianca’s schoolteacher. Pickles is Penelope’s toy, a purple horse. Piggie is Ben’s stuffed pig.

Wishenpoof Plot: What is it about?

The series is about a young six years old girl named Bianca who has wish magic and can make wishes come true. She uses it to help others and goes on many magical adventures with her friends in a place called the Enchanted Forest. In every episode, Bianca learns something new. Bianca has a lot of imagination, fairy wings and a dandelion wand that makes wishes come true. This show has all the ingredients a preschooler can wish for! Wishenpoof, however, is different from most shows for children. Despite having the magic element, it does not encourage the thinking amongst children that you need magic to solve all your problems or that only magic can make all your problems disappear. There is one such episode in the series when one girl in Bianca’s class makes one of her friends feel bad about her drawing by shooting down her imagination. Bianca’s first thought is to use magic to make the girl feel bad too. But her best friend Bob the bear comes in with a very useful and important reminder. He tells Bianca that with or without magic when she sees something that is not right, she should say something, which is a very important lesson for young kids to learn and remember.

The show teches kids to differentiate between what is wrong and right. It is also teaching them to use their words when they see something happening that is not right or hurting them. It also encourages them to reach out and take help from adults. The episodes are fun and filled with mermaids and baby unicorns but also with important lessons of life. When asked Angela about the show she said,” I’ve been so inspired over the years by talking to parents who are interested in how I create my shows. Because I have a Masters in Child Dev psychology, I believe in using formative research to ensure that we are teaching kids through their screens. Whether it’s reading (Super Why!) or social-emotional skills (Daniel Tiger’s Neighborhood and Wishenpoof!) or the arts (Creative Galaxy) or kindergarten readiness skills (Blue’s Clues)—my goal is to educate. I want to educate, empower, and inspire preschoolers through each show.” Santomero also said that her inspiration was Mr Roger, a show that she had watched as a preschooler which also aimed at educating the kids through the screens. She joked that she also wanted to follow in his sneakers!

Wishenpoof Season 3 Release Date: When will it premiere?

Wishenproof season 2 part 3 premiered on May 10, 2019. The show has seen a successful run of two seasons, and it has been widely appreciated by parents and loved by the kids. The show might return soon, but there are no confirmed reports on the renewal as of yet. Our best guess is that if the show does get renewed, Wishenproof season 3 can release sometime in September 2019. We will update this section as soon as we hear more.

While we wait for an update on Wishenproof season 3, check out the below trailer to refresh your memories. If you haven’t seen the show yet head over to Amazon Prime to catch all the episodes of the previous seasons.