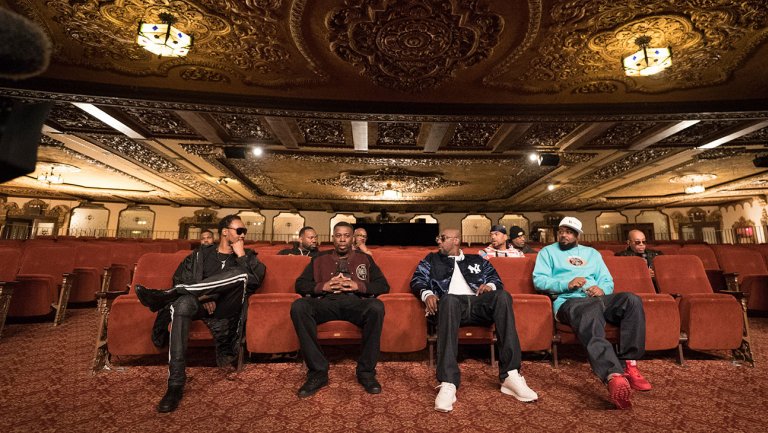 Hip-hop has been one of the most influential genres of music since the 1990s. Many artists like Run DMC, Grandmaster Flash, Rakhim, NWA, Tupac Shakur, Biggie Smalls, and Dr. Dre have pushed the boundaries of this form of music. Rap groups like NWA took the world by storm with their controversial lyrics and straight-out attack against the police and state brutality upon people of color. Another such group which has been very influential in the history of hip-hop music is undoubtedly Wu-Tang Clan. The group is from New York City and their debut album, ‘Enter the Wu-Tang (36 Chambers)’ redefined hip-hop and became one of the most influential albums of the genre’s history.

A docuseries about this hip-hop group called ‘Wu-Tang Clan: Of Mics And Men’ has been made by journalist/director Sacha Jenkins which chronicles the tumultuous life of the group and its members. The series premiered at the Tribeca Film Festival in New York on April 25, 2019. Rights for the series was obtained by the network Showtime. Excited by the prospect of this seminal docuseries, Vinnie Malhotra of Showtime said, “The Wu-Tang Clan is a seminal group that deserves a seminal documentary. Sacha Jenkins delivers just that, not only reminding us of their powerful history through vintage footage but also placing their impact in modern-day perspective that will be meaningful both to their diehard fans and music fans in general.”

Wu-Tang Clan: Of Mics And Men Cast: Who is in it?

The docuseries is based on the journey of Wu-Tang Clan since their inception to the present day. The group comprises of the rappers  RZA, GZA, Ol’ Dirty Bastard, Method Man, Raekwon, Ghostface Killah, Inspectah Deck, U-God, and Masta Killa. Along with them, other collaborators of the group are also featured in the series. One of the most important collaborators of the group is undoubtedly Divine, brother of the group’s de facto leader RZA. He speaks about his association with Wu-Tang Clan.

Wu-Tang Clan: Of Mics And Men Plot: What is it about?

‘Wu-Tang Clan: Of Mics And Men’ is a four-part documentary series on one of the most influential hip-hop groups of all time. The series features extensive interviews with all the members of the group and unseen archival footage. Interestingly, Jenkins has just not been content with portraying a story of a famous rap group. The series has important political undertones talking about race issues and depravity in Ameican society, topics which are very pertinent for these times.

Jenkins also believes that the music of Wu-Tang Clan is a clear answer to the structural racism and police brutality they faced and witnessed while growing up. We see the members of the group talk about their childhood, their influences, how the managed to meet and then find their footing in the tough music industry to slowly become the icons that they are today. The members of the group take us back to the places where they grew up and talk about how they managed to give up criminal activities like dealing in drugs and began concentrating on the music.

This is what Showtime had to say about the docuseries: “This limited docuseries looks back on the group’s career, combining intimate and reflective interviews from each of the nine living members with never-before-seen archival footage and performances. Their ingenuity and entrepreneurial spirit brought them together to overcome the poverty, violence, and oppression of their New York neighborhoods. But it was music and their shared lyrical genius that allowed them to form the most recognized musical movement in the world, all while walking the tightrope that links business with brotherhood.”

The fact that despite all the internal turmoils in the group over the years has not had an effect on their brotherhood and business-minded approach to music is another main theme of the series.

Wu-Tang Clan: Of Mics And Men Season 2 Release Date: When will it premiere?

As far as the next season goes, considering the fact that the show is a miniseries, the likelihood of another season is slim. Wu-Tang Clan: Of Mics And Men season 2 can only happen if the filmmaker decide to update the audience on members of Wu-Tang Clan in a few years time.  We will update this section as soon as we hear more.

Filmmakers released a trailer of the docuseries to give you a glimpse into the show. You can watch it right here: