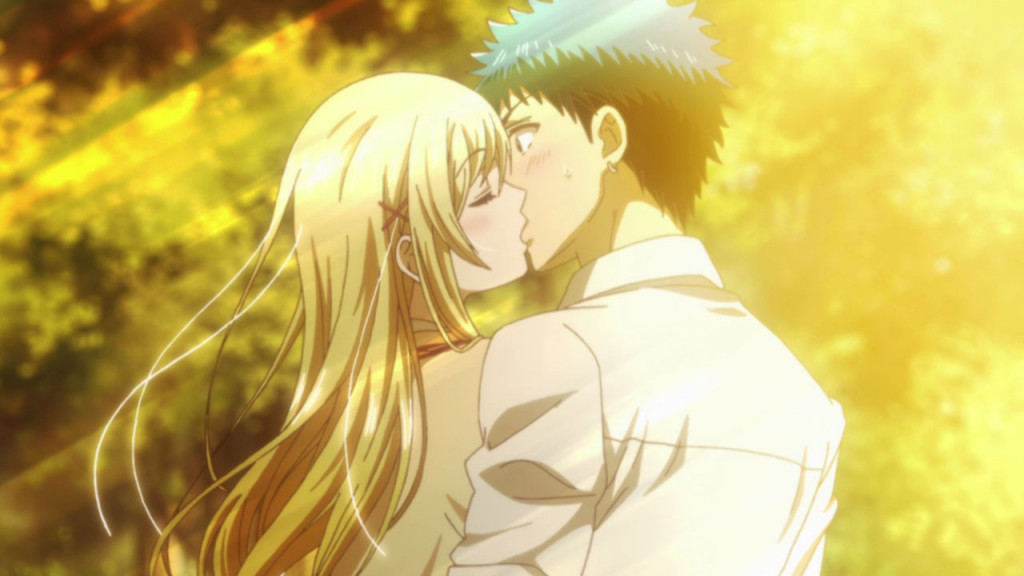 The manga from which ‘Yamada-kun and the Seven Witches’ has been adapted from is known to be one of the best titles in the high school comedy genre. So the anime actually had a lot of hype around it even before it released as many fans of the manga were curious to know how it would turn out to be. Soon after its release, the anime received a lot of mixed reviews from fans but over the years, it has been able to establish itself as a slightly above-average show. When it comes to the story of it, there is nothing unique or special about and it involves all the possible clichéd archetypes that you can expect from a high school harem. But the good thing about its story is that it knows when it needs to lighthearted with its comedy and it also knows when to be more serious with its supernatural mystery moments.

Overall, ‘Yamada-kun and the Seven Witches’ is an anime that has the most unoriginal cast including characters that fit the perfect anime stereotypes like the kuudere, the tsundere, the loli, etc. Apart from this, there are many other flaws to it as well. But, in the end, it all comes down to the expectations you keep from it. ‘Yamada-kun and the Seven Witches’ can be extremely enjoyable if you’re only looking for a simple straight-forward lighthearted comedy anime that has a sprinkle of romcom to it.

Yamada-kun and the Seven Witches Season 2 Release Date: When will it premiere?

‘Yamada-kun and the Seven Witches’ season 1 premiered on April 12, 2015 and came to an end on June 28, 2015. During this span, it premiered a total of 12 episodes with each one of them being 24 minutes long. Since then the anime has a had a few other spin-offs and side story versions as well. But when it comes to a season 2, there isn’t much we’ve heard about it. One major reason why the chances of a new season for the anime are pretty slim is that the manga has come to an end and the author, Miki Yoshikawa, has no intention of reviving it either. So unless the illustrator of manga decides to come out with more content, we will probably never see a renewed version of this show.

An attempt has been made to publicize the anime in the Western regions as well by releasing its English dubbed versions. If this works out well, then even the sales of the manga might go up and that’s when the mangaka behind it will be forced to create more content. More content will mean more chances of getting a sequel. So only time will tell how this step towards making it popular in the West works out for the creators and at the end of the day, the entire future of the anime completely depends on these English Dubs now. If in the future, if we get any news regarding its renewal or ‘Yamada-kun and the Seven Witches’ season 2 release date, we will certainly update it here in this section.

As stated above, Crunchyroll has recently made the series available in English for Western audiences. Another English dub is also available on Funimation.

Yamada-kun and the Seven Witches Plot:

Ryū Yamada, the main protagonist of the story is having a bad day at school. Firstly, the fact that he is not the best of students around is not helping. On top of that, he has now managed to swap bodies with the model student of his class, Urara Shiraishi. It all started when he was mindlessly walking down the stairs while she was walking up. He slipped on one of the steps just as he was about to cross her and accidentally slammed into her.

When he recovers from the fall, he notices that he is trapped in her body while she is trapped in his. This is extremely confusing for the two but they both decide to keep quiet about it lest the others find out. They both then decide to spend the rest of the day in each other’s bodies so as not to arouse further suspicion. It is during this time that Yamada notices that Urara gets bullied a lot. He figures that this is the perfect time to remedy the situation and takes advantage of being in her body to shut her bullies out.

At the end of the day, they meet to discuss the problem at hand and discovers that it is not the collision that swaps their bodies but a mere kiss. Relieved that they are able to swap bodies back so easily, they proceed to go about their day. It is at this moment that Toranosuke Miyamura, vice president of the student council, offers to go on a date with Urara after being suspicious about their activities. Still having their bodies swapped, the two discover that Miyamura knows their secret and then offers them both to revive the Supernatural Studies club in their school so as to switch places secretly.

Yamada also discovers that he is able to switch bodies with Miyamura as well, and here begins their journey of exploring the additional powers that come along with it. It is at this moment that another student in their school suddenly appears and insists to join their club. She reveals her name to be Miyabi Itō and explains that she has always been keen on the supernatural and that the Supernatural Studies club in the school will be the perfect opportunity to further her studies on the same. She shows off her paranormal collections and the drafts she has made about her various investigations.

After the gang cleans up the old club room, Yamada asks Urara to kiss him so that she can take the supplementary exam instead of him and for once he will be able to score well. However, the two of them are discovered by Miyabi while they are kissing and she proceeds to spread rumors in their school that the two of them are dating. In an attempt to reverse the mess, Yamada proceeds to kiss Miyabi and switch bodies with her so that he is able to convince others in the school that the rumors are actually false.

However, to his dismay, he finds out that none of his classmates actually believed Miyabi in the first place. They begin to understand their powers and use them effectively so as to take care of everyday activities and make their lives easier. When they discover that Miyabi owed money to some other people who were constantly threatening her, they decide to use their newfound powers to teach them a lesson. Miyabi finally joins the club and the group starts experimenting by kissing each other and figuring out what exactly their powers do.

They discover that the powers that they have received are not actually swapping their bodies but are transferring the abilities of the other ‘witches’ into themselves. The anime goes on to show how the group utilizes this power to make their lives easier but also how they land into trouble because of it. It also focuses on many gender stereotypes, albeit quite tamed in that aspect; but one can definitely find the experience debating with their own thought processes.

Yamada-kun and the Seven Witches Characters:

Ryuu Yamada: The main protagonist of the story and quite a drag when it comes to studies, Yamada suddenly finds himself enjoying school a lot more after a fortunate accident with the model student of their school, Urara Shiraishi. One day, while going down the stair, Yamada suddenly slips and collides with Urara and finds that the duo has swapped bodies. After they learn that the body swap was not caused due to the collision but because the two accidentally kissed while they fell, they decide to take advantage of their newfound power to make their lives easier. He along with a few others revive the Supernatural Studies club where they all experiment with their powers by kissing each other. Yamada eventually starts to fall in love with Urara after spending increasing amounts of time with her and they eventually start dating.

Urara Shiraishi: The female protagonist of the story and the main love interest of Ryuu Yamada, Urara is a brilliant student who holds the highest grades in her class. This makes her life much harder though as she constantly finds herself on the receiving end of threats due to her exceptional abilities. She is also bullied by her classmates who are quite jealous of her academic prowess. After colliding with Yamada at the staircase, her life completely changes. She discovers that she has the ability to swap bodies simply by kissing and she proceeds to use this to her advantage and finally stand up to her bullies. She also finds herself getting attracted to Yamada after realizing that he is the only one who truly likes her for who she is and not for her academic achievements and eventually starts dating him.