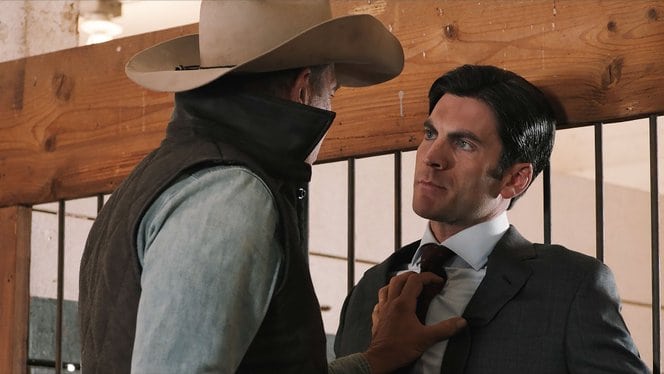 ‘Yellowstone’ is an American drama television series that airs on Paramount Network. The show first premiered on June 20, 2018. It has been created by Taylor Sheridan of ‘Sons of Anarchy‘ fame, and John Linson, known for producing films like ‘The Runaways’.

The show revolves around the conflicts that arise around Yellowstone National Park, a cattle ranch, an Indian reservation and among the respective land developers involved. We are told most of the story through the eyes of a ranch family in Montana that has to face off against several interested parties who are encroaching on their land. While the show has certainly drawn a large section of the audience with its star power and the content, critics have not been too pleased with it, saying that it is a little too melodramatic at times, which makes it hard to relate to the series despite the strong cast and beautiful backdrops.

Yellowstone Cast: Who is in it?

The cast of ‘Yellowstone’ show is led by Kevin Costner, of ‘Dances with Wolves‘ and ‘The Untouchables‘ fame, who plays John Dutton, the controller of the largest ranch in the US. Wes Bentley plays Jamie Dutton, an attorney who aspires to be a politician. Kelly Reilly plays Beth Dutton, daughter of John and Evelyn Dutton. Luke Grimes plays Kayce Dutton, son of John and Evelyn who was formerly a US Navy SEAL.

The series also includes Cole Hauser, who plays Rip Wheeler, the right-hand man to John and foreseer at Yellowstone. Gil Birmingham comes in as Chief Thomas Rainwater, the head of the Indian reservation, Danny Huston as Dan Jenkins, a land developer who wants to build on parts of Yellowstone, and Kelsey Asbille as Monica Dutton, Kayce Dutton’s wife with whom she has a son and stays at the local reservation. Neal McDonough, who has appeared in several shows like ‘Justified‘ and ‘Suits‘. joined the cast in season 2. Neal appears as Malcolm Beck, a wealthy business mogul who runs an area casino with his brother, Teal.

All the the main cast members are expected to return for season 3.

Yellowstone Plot: What is it about?

‘Yellowstone’ is an American series that revolves around John Dutton’s family who is the owner of the largest contiguous ranch in the United States. The Dutton family is constantly involved in conflicts resulting from its land developers in the neighboring regions of the Yellowstone National Park and an Indian reservation. The story is told from the perspective of the media and chronicles violence in a land where land developers earn billions in profit, politicians are involved in the dirty game of world’s largest oil and lumber corporations’ trading them for personal agendas. Being a sixth generation rancher as well as a devoted father, Dutton is familiar with how the dirty game is played, and is bent on protecting his land and family at all costs.

Season 2 ends with the Duttons gearing up for a final fight with the Becks, as they scramble to save one of their own.

Yellowstone Season 3 Release Date: When will it premiere?

On the eve of season 2 premiere, Paramount announced that the show has been greenlit for a 10-episode third season. “We really want things to be cinematic with really great storytelling and have complex, nuanced, complicated characters where the setting is almost like a prime character of the whole piece,” Kent Alterman, President of Comedy Central, Paramount Network, and TV Land, told Deadline in May about the vision for Paramount Network. “The best example of that is Yellowstone. It’s very cinematic. It has a movie star in Kevin Costner. It’s got really deep, rich, complicated characters, the great interpersonal family relationships, and it can just keep exploring a lot of different stories with those characters.”

Even though no release date was announced, we expect ‘Yellowstone’ season 3 to premiere sometime in June, 2020.

Should you watch Yellowstone?

What stands out about the show is the strong cast and the resulting stellar performances. However, it must be kept in mind that this does not save the series in its entirety. It is still a sprawling mess at times, and we get to see just how testosterone-fueled the show is.

The Hollywood Reporter sums it up well, and writes, “There are guns and horses and more guns and a helicopter and dynamite and sex and explosions and lots of metaphorical dick-measuring and discussions about what it means to be a man or be a cowboy. There are jokes about being gay. There’s a possibly gay brother, Jamie Dutton (Wes Bentley), who is the family lawyer and wears suits and has immaculate hair but only admits to sister Beth, when she viciously calls him out on his sexuality (saying that daddy won’t like it if he finds out), that he’s ‘celibate.’ ”

While we wait for ‘Yellowstone’ season 3, here’s the season 2 trailer. If you haven’t seen the show yet head over to Paramount Network to catch all the episodes of the previous seasons.